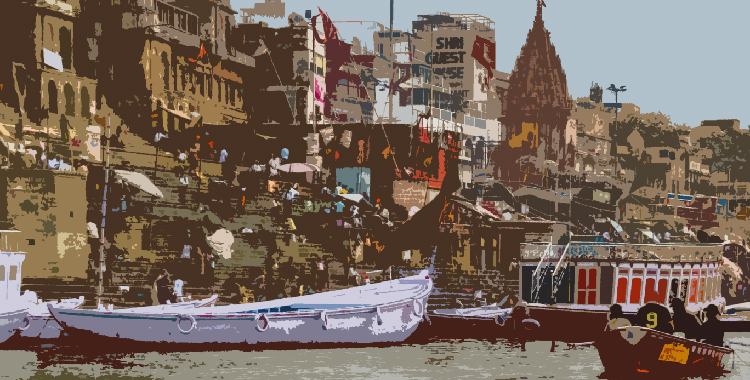 Dear diary,
Delhi
Ma:
There she lives, in the mysterious air of Kashi,
Troops of shaven heads clad in pure white band together,
With earthen pots cautiously set on her tender top, she falters,
Squeezing through the blackened alley, down the stairs by the Peepul tree,
Descending the bloody creek, with ghastly bodies that reek of half-done rites,
Mumbling her eerie chants, to the Sun Goddess, to the Ganges, to the dead,
Skipping the bobbing heads of crowds bathing their sins away, she contrives,
Stripping her now blotted widow Saree, pleat by pleat,
Disposing all the woes, sins and regrets to the river that takes it all in,
Stark naked, folding her hands in prayers to the ashes of the heavenly souls,
Sullied-Unsullied, pure-impure, grey-white, all persevere under the same sky,
Surviving the odds, she serves the old, languishing to die,
With tears of pain, I curse her for her life,
She held my hand when father fought for independence, dotingly, assuringly,
Why? Where shall I go now? To strip myself of anger or love?
Ma? What was it about the land of the dead that clasped you between life and death?
Or was it the father who martyred himself at the border?
There you glorify, glorify death, in the mysterious air of Kashi.
With devotion,
Sukshma

Previous poem(s) in the series: Unturned, Kitchenette, Silk Veil, It is a good day

Image: Photo by Srivatsan on Unsplash