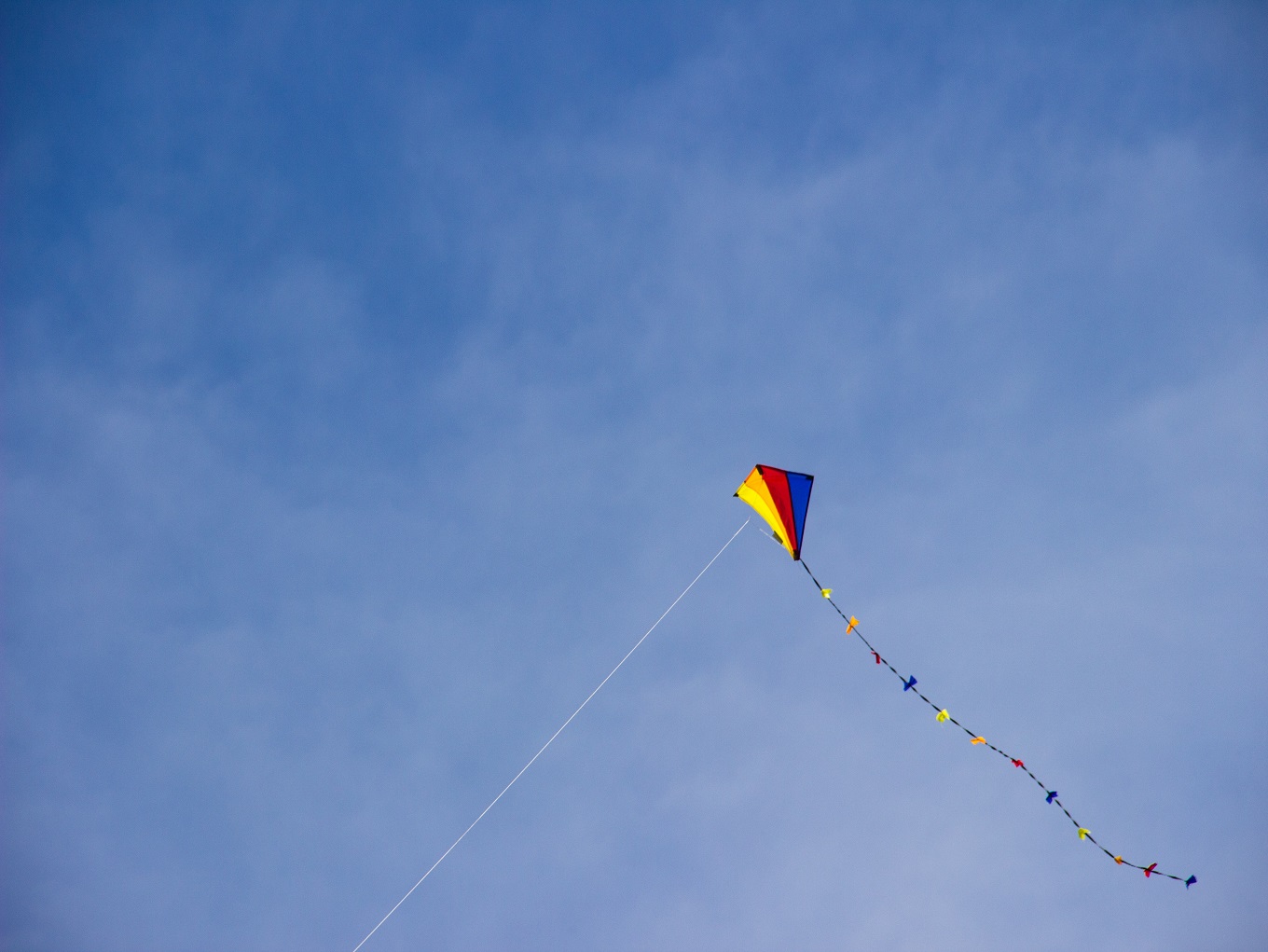 The tight fabric of the kite kicked against the wind and shot up into the sky. It was an exceptionally windy afternoon, but the sky was still as blue as a toothbrush. She watched as it rose into the air and became an undiscovered life form with scuttling movements that made it seem as if it were swimming rather than flying. To some degree, this was kind of the point: her grandmother had given her a kite that resembled a goldfish, because every time Maria had gone to visit her, the first words to leave her mouth were “my fishies,” and the two of them would head into the backyard where they would watch the rising moss of the pond scum floating amidst the silently massive koi. Her grandmother would give her a handful of fish food and show her how to toss it like rice. The fish would swarm towards the surface like ancient serpents, their wet heads colliding into one another as their gaping jaws reached for the flakes of food. When they cleaned the house out a few months ago, the fish had broken the surface with their soft white underbellies, the water from the lava rock fountain dripping across their dead stares. She could have taken care of them, she told her mom, but the fish were long gone before they had discovered her grandmother sleeping in her recliner, alone.

The creature in the sky glared back at her, transfixed and accusing. Its eye was a circle in a circle. The wind shook its scales with exceptional force. Her grandmother used to have fine tapestries hanging off of her walls with dragons intertwined through opaque clouds, their spines glittering with soft flicks of golden thread. New clouds were born from the depths of their nostrils. She had asked her grandmother what a dragon was like, if it could actually speak and why they looked so angry all of the time. “I don’t know,” her grandmother responded. “I’ve never met one.” Maria told her that if she had ever met a dragon, she would ask it what it was like to fly; how it felt to be above everything else in the entire world. “That’d be a great question to ask them,” her grandmother told her. This was back when they had time enough to sit in on Friday night and watch Family Feud while quietly gnawing on pre-cooked corndogs.

The kite string bit into the skin of her palm and tugged hard; her feet lifted enough off the ground for only her toes to reach the grass. Her feet would flatten again and the kite would straighten itself out. The wind was howling around her. Her hands were becoming red with the strain of her holding against the wire. There was a hill near her grandmother’s house where they would walk up and press themselves against the wind before reaching the crest where the gales were strongest. “I like to climb up here sometimes,” her grandmother had told her, “by myself. To see if I can still hear your grandfather.” She asked what her grandmother meant, because her grandfather had been gone long since before she was even born. “If I stand still and listen closely, I can hear him speaking to me in the passing of the wind.” Maria would stop walking suddenly and try to hear anything in the forces moving around her. Nothing. She asked her grandmother what her grandfather had said to her. “Oh, he tells me simple things… like to remember to take my pills before I go to bed and to wear a jacket next time I come up the hill, so that I wouldn’t be so cold. Things like that.” Maria told her that these were peculiar things for him to tell her, but her grandmother asserted that if he hadn’t reminded her, she would have forgotten.

The wind was biting her arms now, the kite still slicing back and forth. Her feet began to lift from the ground, the wind pulling her off and away from the constant slithering sound of the grass and into the sky where the only sound was the roaring of the wind. She was now floating helplessly, the toes of her shoes flailing for something to grab onto: a rock, the stray branch of a tree, a powerline, anything to keep grounded but everything was just too far away. Passing a telephone pole, she could hear the menacing hum of the electrical box while five black birds on a wire blinked at her with their heads cocked to the side. Below them, a gold pick-up awaited them to make their move and she wondered if it was the same as the one her grandpa used to drive—at least, this was what they had told her, she didn’t actually know if he had driven this particular truck that much or if they were just making things up. It had a cassette player and a bobble-head of some guy with weird hair on the dash, constantly smiling back at you and judging your driving skills. It belonged to him, but her grandmother took it everywhere with her in the passenger seat. Once, her parents caught her sitting there and blew up at her grandmother.

“She can’t sit in the front seat,” her mother said, “she’s too young. It’s too dangerous and illegal.”

“Well, not saying that we would ever get into an accident, but a crash is gonna effect you no matter where you’re sitting, and it’s the only vehicle I got,” her grandmother said. Her parents simply looked at one another, a relenting shrug passing from one to the other. They didn’t have a particular destination while riding in the truck, they just drove around to look at stuff: old buildings, ponds where lonely geese would be resting and schools for the visually impaired. The kite began to follow the route that her grandmother liked to drive, seeming to increase in elevation. She watched a squad of geese pass by in the shape of a paper airplane before dissolving the clouds before them. The wind was growing louder and louder in her ears before she finally became deaf from the pressure filling her head. The kite zigzagged with the precision of a knife, the tether taut and sharp in her hand, but still she held tight. Below her, the city became the intricate pattern of a carpet, receding further and further away. If she let go, how long would it take for her to hit the ground? She guessed the distance and tried to calculate the minimum velocity that her small body would be able to accumulate from this height.

While the house was being emptied, she went over with her mother to rummage through all of the old trinkets and clothing. Most of her things had found their way into cardboard boxes, while everything else was already taken by her aunt and mother. She remembered walking through the door and staring at the empty chair where her grandmother used to sit; the surface an unexciting shade of dark grey cashmere. Everything about the place seemed wrong, somehow. Even with all of the movers and the sweating, working bodies entering and exiting the house, it felt completely empty. At times, it even felt silent. Even with the songs of blue jays swooping through the open doorway, even with the hum of locust heat bleeding through the walls like apparitions, there was truly nothing salvageable left for her to take. Instead, she decided to step through each of the rooms, breathing in the distant aging air left by the passing years; exploring the backyard a final time where the dust of the valley settled in with the grass and pooled in the empty bowl of a fountain where shades of water left spots, her mouth forming the words “my fishies” before heading back inside to escape the unrelenting heat of summer.

The sun grew warmer the higher she ascended. Her face became wet as the kite pulled her through the bodies of clouds, the silence of the mesosphere haunting her, the nothing that lay above everything. She closed her eyes and tried to listen for the sounds beyond the roaring air around her, beyond the silence of whatever void the sky accumulated. Her ears were endlessly searching for the voices of her grandmother and her grandfather, unsure of what they would even sound like. What would her grandmother sound like? Would she be able to identify her call? She kept her eyes closed and somewhere in her ascent, a weightlessness took hold; the sharp burning sensation in her hands died while her body floated in a dense bubble of silk that she was able to hold between her fingers; its surface shimmering with a bright crimson wave. “But kites are boring,” she had told her grandma, after discovering one in the upstairs closet, “all you can do is watch them fly.”

Her grandmother shrugged and knelt beside her. “You know, a long time ago this particular kite would have been used as a signal. If you wanted to alert someone who was far away, you’d fly your kite and they would know where you were.” Maria would study the kite in her hands, watching the bending of light on the fabric, wondering who she would need to signal.

“What happens after… when they see my kite?”

Her grandmother shrugged again. “Well, when it gets windy again, maybe you’ll know.” She kept the kite that her grandmother gave her hanging over her bed, unused and unheeded, even after she had gone. It wasn’t until she heard the scratching of the leaves in the poplars outside that she decided to test the weather. That morning had seemed like a distant memory now that she’d sense the floating of her body, the silken air that swathed her in a limbo outside of everything. It was warm here, she thought, and comfort slowly grew within her. Her eyes finally opened to the hand that caught her signal; her body dancing silently in a land filled with dragons.

Photo by Philippe Oursel on Unsplash

Trevor Ruth is a writer from Livermore, California, whose work has previously appeared in Occam's Razor, Typishly, The Southampton Review, Wingless Dreamer and Z Publishing House's Best Emerging California Poets anthology. He has a degree from California State University, East Bay and writes regularly for The Baram House.