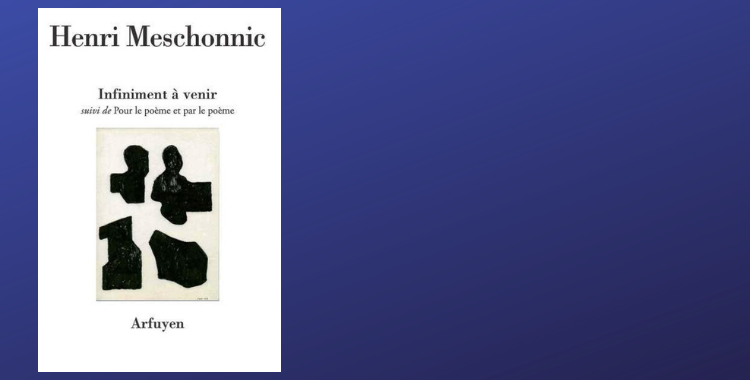 –from Puisque je suis ce buisson (Since I Am This Bush),
Arfuyen, 2001

Translators’ Note:
The original poems were written by Henri Meschonnic, whom Pierre Joris described as a core figure of the French literary scene of the last half-century (https://pierrejoris.com/blog/henri-meschonnic-1932-2009/).

Our challenge as translators was to capture the continuous movement of the poems, a movement that suggests the possibility of passing energy from subject to subject, of inventing within language new ways of being with oneself, others, and the world. Replicating this movement in English texts was difficult. We could hear and feel the rhythm of the French. And, we thought, Meschonnic’s minimal vocabulary and relative lack of poetic features, such as images and metaphors (his poems are nearly adjective-free), suggested somewhat of a clear path from French to English. However, we soon realized his rhythms and condensed language was in the service of mapping voices, not poems. His use of enjambment and only the most colloquial verbs and nouns made us take a hard look at individual words (no matter their simplicity) and therefore, the world. In translating these poems, we became, like Meschonnic, that accomplished innovator, “patients of life.”

Our translations of Meschonnic’s poems have appeared or are forthcoming in Asymptote, The Brooklyn Rail, Ezra, and Rhino Poetry. We’d love to see his stripped-down voice reach more Anglophone readers.

Translator Bios:
Don Boes is the author of Good Luck With That, Railroad Crossing, and The Eighth Continent, selected by A. R. Ammons for the Samuel French Morse Poetry Prize. His poems have appeared in The Louisville Review, Painted Bride Quarterly, Prairie Schooner, CutBank, Zone 3, Southern Indiana Review, and The Cincinnati Review.

Gabriella Bedetti studied translation at the University of Iowa and the Sewanee Writers’ Conference. Her translations of Meschonnic’s essays and other writings have appeared in New Literary History, Critical Inquiry, and Diacritics. Meschonnic was a guest of the MLA at her roundtable with Ralph Cohen and Susan Stewart.

Henri Meschonnic (1932–2009) is a key figure of French “new poetics,” best known worldwide for his translations from the Old Testament and the 710-page Critique du rythme. During his long career, Meschonnic generated controversy in the literary community. As a poet and as a translator of the Hebrew verse of the Bible, Meschonnic contends that rhythm rules over meaning, flowing from the bottom up. For him, the revolution in the idea of language is the basis of a continuing change, not only in the poem but also in the idea of history and social life itself. His poems appear in more than a dozen languages; however, even now, almost none of Meschonnic’s poems have been translated into English. His poetry has received prestigious awards, including the Max Jacob International Poetry Prize, the Mallarmé Prize, the Jean Arp Francophone Literature Prize, and the Guillevic-Ville de Saint-Malo Grand Prize for Poetry.