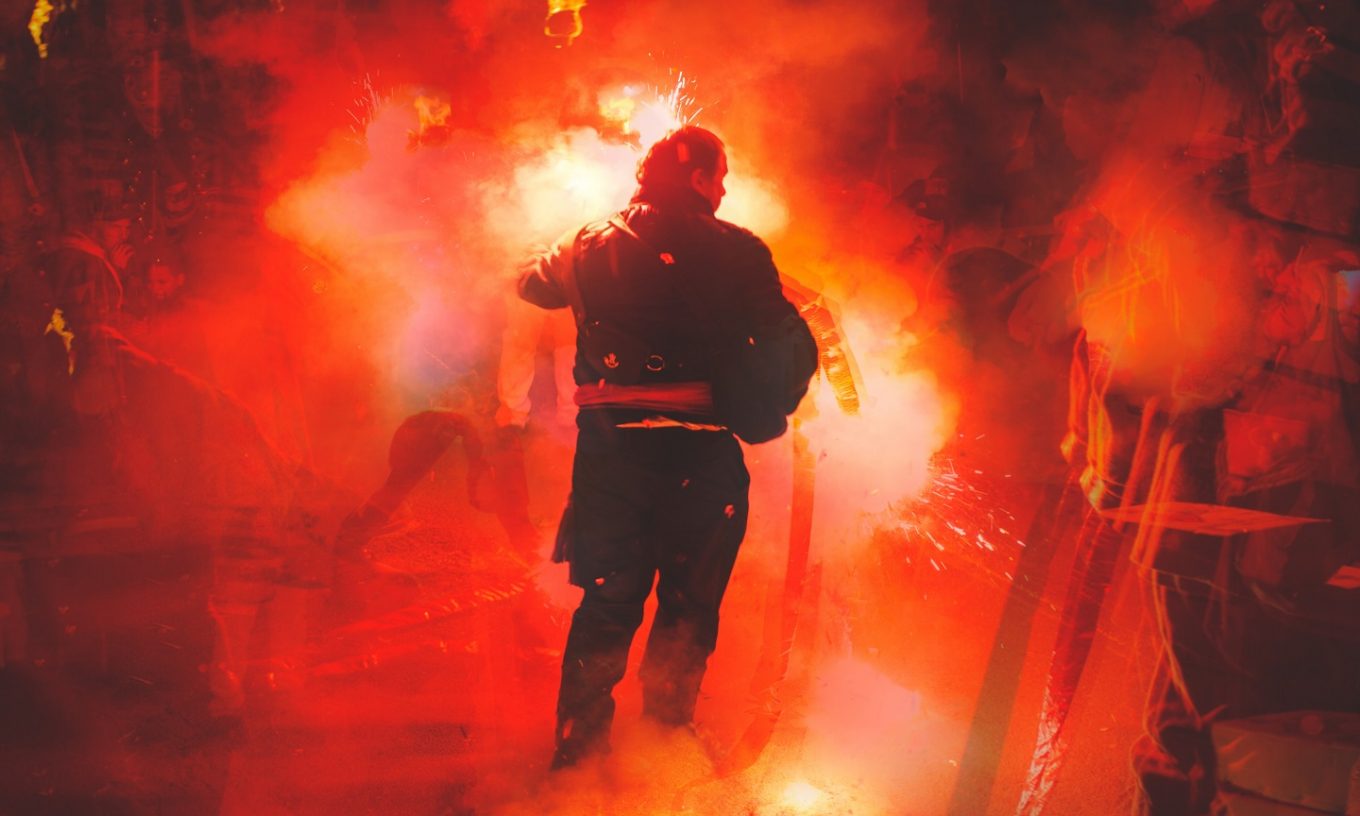 Gaping hole ripped by pressure with fissures of fire bleeding up into the darkened night, swirling, towering, flame spires.

Over the radio, they say it’s the eye of the fire.

Supply boats spraying water from cannons. Cutters circling below against the tide.

Helicopter blades blurring in whirls. Through the noise and turbulence, I look off, over the side, down into the eye. How long? How much longer? comes through the headset. I still see fire, I say. I still see towers of blown flame.

Mother’s hands hide her face. Her mother, with her arm around her, repeats the same sentence over and over. The television blares, reporters reporting the rig was aflame, exploded, and sunk. They say they’re all gone. No survivors. They say it over and over.

Night. Muted television. Mother next to me on the loveseat, asleep. Burnt-out filter in her hand. Red closed eyes. Watered out eyes. Television colors flicker murals across her face. A man’s photo. His name on the television screen. Father’s picture. Father’s name. Another’s picture. Another’s. Flicker again, and again, across her face. Mother wakes up, turns it off. She says she can’t.

She puts me to bed. Curls in and hugs me tight. Flicker of a match. Glow of the tip. She exhales and I see her wet face.

He told you to say that, didn’t he? I’m not crying for him, mother says. I’m crying for you.

Red light district. Rain runs in rivulets down the window. I lean against the window and watch distant pillars of gas flame spiraling out at sea under helicopter lights.

The woman nude in bed, seated, lights another. You only want to talk? she asks. Aren’t you supposed to be out there?

It’s my break; my money, I say. I need to know if you know this woman.

What’s her name? she says.

Father’s woman. She has a name, but it is not one I will tell. Not one I ever will.

Her name was not plural. She was young, black hair, long and at the waist. She walked with me hand in hand along the beach when father was away. She’d say, you have such soft hands. A woman’s hands. And in father’s house on the water, she helped me with makeup, and when she looked in the mirror at us, she would smile and say, you look just like me. You look beautiful, and I’d say, I need some of your girl clothes, and she’d giggle and tell me to go upstairs.

Father’s woman is downstairs. I walk down, through the dressing room. She’s nude, putting on an outfit like what she had upstairs then. Her hair is still long, black, at her waist. Her face is young, still. Made up and cracked with age. Cracks only someone who knows her can see.

Why’re you here? she asks, turning to me, still getting ready.

He’s dead, baby. What else is there to know?

I don’t remember him, I say.

He was an asshole. A piece of shit. He was the best friend I ever had.

Tired. Burned-out. Third day straight staring into the inferno. The spiraling swirl of flame breathing under heavy jets of water. Voices speak through the headset in drowned static, inaudible in their repetition. Inaudible in all the noise.

The pilot knocks on the cockpit window. I turn. He motions to my headset, pointing his hand towards his own furiously. I nod and look back out. Into it.

Deep inside the inferno, jetting water parts flame, and flame parts to a flickering image of my father’s face, a face I saw as a boy, a face I see as a man. I see television static, his name, his face, burning away under the eye of fire, and as I stare and let myself go, I just let myself into it, how my mother leaned her face into mine and let herself free.

Photo by Jake Hills on Unsplash