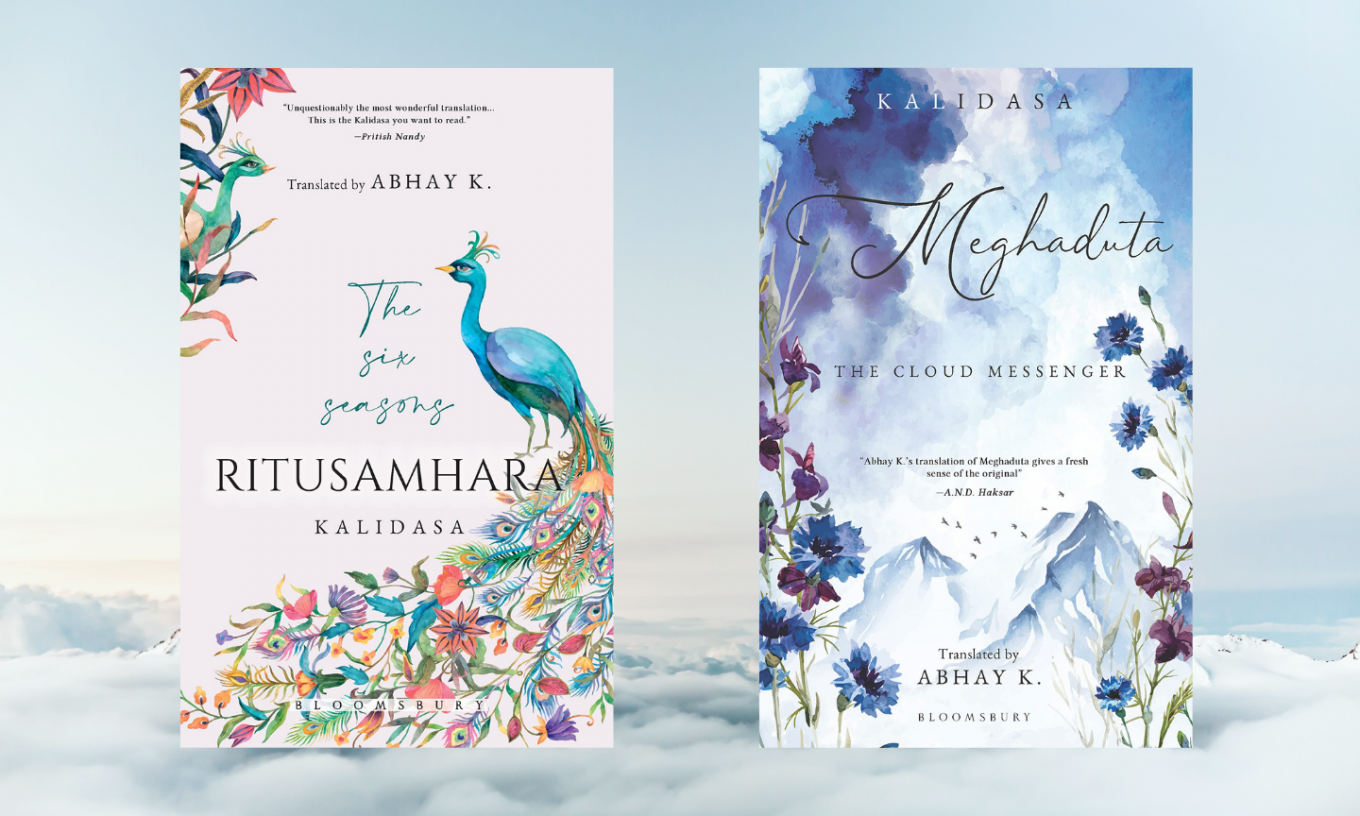 Like beautiful rain on the summer scorched land, comes these translations of Kalidasa’s poems from two very popular works by the classical Sanskrit poet from the 4-5th century. Kalidasa’s work is remarkable for its consciousness as one of the world’s foremost eco-poets, at a time when this terminology didn’t even exist. His deep understanding and alignment with, of the various facets of nature, intricately delving into names of flowers and animals, as well as the conditions under which they deal with in the harsh summer heat, in search of water, rest and shade- are futuristic and greatly relevant to contemporary times, especially when we, as a planet have already begun facing severe climatic change consequences.

The two works featured here- Meghadūta and Ṛtusaṃhāra in the lyrical translation by Abhay K, showcase Kalidasa’s surprisingly futuristic poetry, that is not only sensuous and vibrant, but also remarkable, in its understanding and sensitivity of the animal world’s interdependency on each other, and the unique ability of dangerous creatures, in seeking refuge in one another during the harsh weather.

Readers might note that Kalidasa evokes the sub continent’s rich flora and fauna, exotic languages, food, wine and music, even monuments, landscapes, traditions and myths in these poems where he takes the reader on a ride along the different seasons and nature travel.

Meghadūta is a lyrical love poem, composed in 115 verses that have been set to the mandākrāntā meter, well known for its lyrical sweetness.

In Ṛtusaṃhāra, Kalidasa demonstrates the varied effects of the changing seasons on the rhythm of love and life, in plants, animals and humans. Ritusamhara is influenced by the various seasons— Vasanta (spring), Greeshma (summer), Varsha (monsoon), Sharad (autumn), Hemanta (frost), Shishir (winter).

Scorched by the sun’s savage rays
tormented by dust, the Cobra pants
time and again with his hood drooping
as he creeps to rest in the peacock’s shadow. (1-13)

Though the mud has dried in the pond
Bhadramusta grass still thrives there, and
the wild boars scorched by the sun rays
dig deep with their long, round  snouts
as if reaching out for the Earth’s interior. (1-17)

*Bhadramusta: A kind of fragrant grass

Singed by the scorching sun rays
frogs leap out of the muddy marsh
and sit under the hood parasol
of a tired and thirsty cobra. (1-18)

The season of rains approaches, my love, like a king,
with his royal cavalcade in full ceremonial procession—
dark clouds—his war elephants in their mating season,
the glowing flashes of lightning—his tapering victory flag,
and the roaring thunder— the sound of beating war drums
welcomed with maddening cheers by the crowd of lovers. (2-1)

O rainmaker, the saviour of the suffering
please carry my message to my true love—
for I am separated from her by the wrath of Kubera,
please go to Alaka, the residence of the Lord of Yakshas,
where palaces shine under the moon on Shiva’s head,
who resides in the gardens on the city’s outskirts. (7)

Having rested for a while in its shades
enjoyed by the forest dwellers’ wives,
becoming lighter by discharging water,
traversing the path beyond the mountain,
you’ll see the Reva parted into many rivulets
at the rugged foot of the Vindhyas
like an elephant decorated with coloured stripes. (19)

Having seen the Nipa flowers appear greenish red
with half grown stamens, the first buds of the Kandalis
emerge along the bank, savouring the fragrance
of earth in the burnt woods, antelopes will guide you,
O sprinkler of water! (21)

The country of Dasharna will celebrate your arrival
the garden hedges will be white with Ketaka buds
split open like needles. Joyous, the birds will start
building nests on sacred village trees. The Jambu
forest at its border will darken with its ripe fruits
and the Hamsas will stay for a few more days. (23)

Abhay K. is the author of ten poetry books including Monsoon (Sahitya Akademi, 2022) and the editor of six anthologies including The Book of Bihari Literature (HarperCollins India, 2022). His poem ‘Earth Anthem’ has been translated into over 150 languages. He received SAARC Literary Award 2013. His translations of Kalidasa’s Meghadūta (Bloomsbury India, 2021) and Ṛtusaṃhāra (Bloomsbury India, 2021) from Sanskrit, have won KLF Poetry Book of the Year Award 2020-21.

Kālidāsa was a Classical Sanskrit author who is often considered ancient India's greatest poet and playwright. His plays and poetry are primarily based on the Vedas, the Rāmāyaṇa, the Mahābhārata and the Purāṇas. His surviving works consist of three plays, two epic poems and two shorter poems.