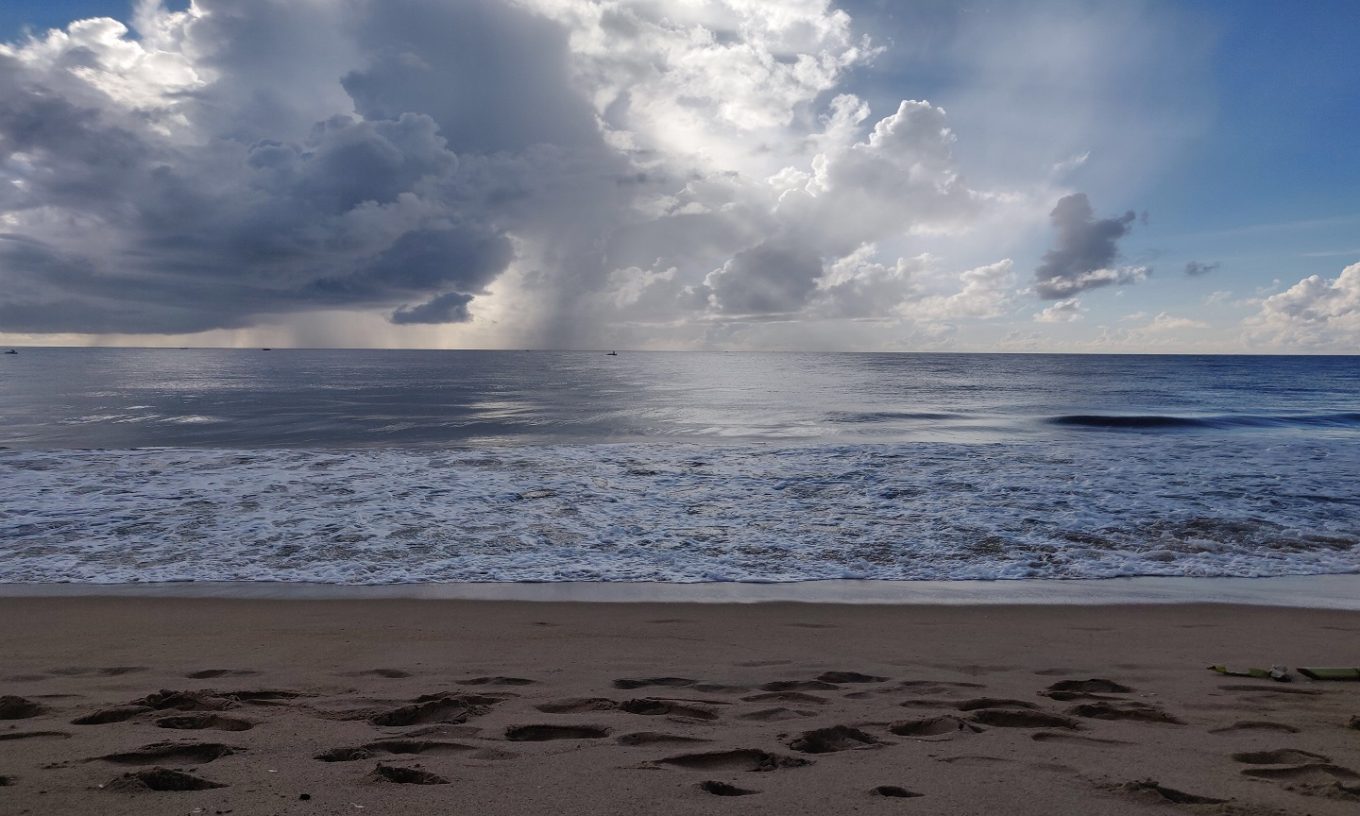 There is a Japanese folk tale about a palace under the sea, a palace made of crystal and ruled by a Dragon King, where time moves much slower, like the stillness of deep water while the current rushes over it. If you’re lucky, a turtle will peek out from between the waves, fin waving, offering a seat on his shell, and he will sweep you away to see it.

My family used to come to the beach every summer, back when everything was whole, or maybe back when my youthful eyes kept me from seeing the cracks. It had been a beautiful place then, white sand and blue ocean, clear skies just begging to be painted by a sunset. In the spot we used to lay down our towels, there’s an upside-down shopping cart. It doesn’t look as comfortable for lounging, if I’m being perfectly honest, but maybe it’ll provide some shelter from the wind. Anything to lessen the smell of exhaust and invite the smell of salt.

I don’t have a towel, so I set down my denim jacket to mark my spot. The shopping cart is surprisingly sturdy and I wonder how many decades it must have been lodged in the sand, for surely decades had aged the coast while only seven years had passed in the city, decades where glass shards appeared to keep me from burying my toes in the sand, decades where the sound of waves receded to be replaced with the great seagull war, a never-ending battle over forgotten happy meals.

I close my eyes and try to remember where I am. We used to play frisbee here, my brother and I, and Dad. Mom would guard the towels and the sandwiches from any daring wildlife, occasionally putting down her book to raise the camera or applaud an especially good save. When we dug through the sand, we found shells or sometimes hermit crabs. We made sandcastles and wrote messages for the waves with our fingers until we were sure the sand was permanently stuck under our fingernails, and we joked and laughed and enjoyed the singularity of the sunset.

I open my eyes and gaze out at the orange horizon. The sun seems to shimmer, edges blurry, as if it were unsure of itself. Not decades, then, but centuries if even the sun had time to change.

My phone is in my hand. And it’s ringing.

“Do you remember that story you told me about the guy that went to the undersea palace on a turtle?”

I give a small huff. Details. “Yeah. Her. But he opened the box and all his years caught up with him, right?”

The wind is strong. I’m surprised he can hear me at all. Must be the shopping cart shelter. “What would happen if he just… went back?”

“Went back? You mean to the palace?”

“Yeah.” To the palace. To wherever it was that time stood still. “What would happen if he went back?”

The sun was sinking into the ocean. Soon it would be completely underwater. Did it get a ride on a turtle’s back too? Can’t see why not. Helpful creatures, those turtles.

There was movement on the other side of the line. Papers, maybe. Or a takeout container. “What’s going on? Are you ok?” A pause. A breath. “Do you need me to come get you?”

“Nah, I’m fine.” I wipe the tear from my cheek, the first of its kind since the funeral. Since I ran away from this place. “I just finally opened the box.”

There’s probably a response, but I don’t hear it. The wind and the gulls are loud, and as I move closer to them, the waves’ crashing becomes incessant, lapping at my toes, my ankles, my shins. The wind bites at my bare arms and I feel it thread through my open fingers before it’s replaced with salt water. The last blaze of the sun bounces off the surface of the sea, so bright it makes my eyes stream.

So bright I almost don’t see it.

There, between the waves.

The dark head of a turtle.

Photo by Gourav Mittal on Unsplash

Caitlin Gurtner graduated from the University of Denver in 2020, with a BA in Theatre and a minor in Creative Writing. A self-published novelist by the age of fourteen, she has been writing her whole life. Many of her short plays have been performed in school festivals, and her poetry was published during her time studying abroad in London. Having returned to her home in the San Francisco Bay Area, she continues to write in all genres and hopes to return to the stage as a playwright and director.