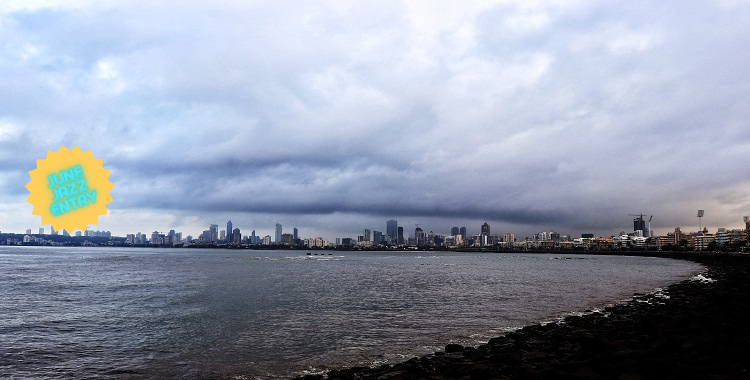 I stare out over the skyline of Mumbai. My nostrils flare as I inhale the scent of rain on the wind. Tiny droplets of sweat bead on my forehead. Our terrace may be on the twenty-eighth floor, but it is certainly no less humid than our apartment further below. A solemn pigeon joins me at the railing, bobbing its head as it too stares out over the city. Kites wheel in the grey sky, casting no shadow on this dreary day. As the scent of rain draws nearer, the kites will slowly drop lower and lower in the sky. Their cries echo faintly over the constant honking and hollering from the traffic jam far below.

A small drop plops onto my browned hand, and I glance down, then up, anticipation building within me. The heat is oppressive, and the sky is as tight as a drum. I hear a familiar pee-whew and half-turn to see a kite wheeling towards me, its eyes on my pigeon companion. With a frantic coo, the pigeon launched itself into the air, flapping vigorously as it hung, suspended, and then dived towards the sheltered balcony of one of the apartments below. The kite wore a faintly disappointed expression but circled the building a few times, likely on the lookout for another fat pigeon to scoop up.

Another drop! The clouds rumble faintly, and I hear a few shouts from the street below. People are gazing upwards; one woman is struggling to open her umbrella. Suddenly, a strong gust of wind sweeps across the terrace. I yelp in surprise as my hair lifts off my shoulders, and I clutch the railing to avoid myself from knocking against it. Falling from the twenty-eighth floor is not on my agenda for the day!

The wind has disturbed the kites, and as I watch the darkening skies, the raptors begin to drop lower, their cries suddenly audible and chased by the hollow rumble of thunder. The wind has certainly picked up; the air now carries the promise of rain where before only a hint existed. Years of spending the summer in Mumbai have made the onset of the monsoon a familiar, joyous celebration, one that I love being a part of.

There is a rain shadow forming over the distant gleam of the Arabian Sea. From my vantage point, I can see across the breadth of my city: from the sea to the south to the dense, green trees of Aarey Milk Colony behind my building, to the vast tract of untouched tropical forest that is Sanjay Gandhi National Park. Skyscrapers threaten to crowd out the view of the sea, but the wind carries the scent of saltwater to my waiting nose, and I inhale deeply. The sea breeze is the scent of home.

Below, the traffic jam has swelled, and the honking approaches a near-deafening crescendo. I clap my hands to my ears and glare down at the mass of cars, buses, rickshaws, bullock carts, and lorries. Will the ruckus never stop? Mumbai never sleeps, and it is a harsh reality that Mumbai’s traffic jams hardly allow the city’s residents to catch a wink of sleep either. People scurry past the vehicles, carrying backpacks, sacks of grain, and bags of fruits as the thunderheads roll in, ominous and grumbling. A school van honks at the gate to my building, and children tumble out, squealing in excitement and pointing up at the sky. The anticipation builds…

My old friend, the pigeon, reappears, looking twitchier than before at the sight of the kites swooping around. It sidles up to me, its blobby body the same colour as the clouds overhead. I cluck to it softly, and it cocks its head to the side, studying me. I resume my perusal of the scene below. Our watchman has picked up his folding chair and moved it to the centre of the compound from the lobby. He sits down heavily and leans back, staring up at the skies with a hungry expression. I can barely make out his face from here, but there is no mistaking the excitement that sweeps across his face as another heavier gust of wind brings a few more drops of silvery rain. Just a few drops more, I pray silently, tilting my head up as well. We have waited for long enough!

Children scamper about the compound, playing football and running after one another, their laughter riding the air currents. A dog barks weakly, protesting the oppressive heat. The air tightens, and another dog – possibly Ridhima Aunty’s obese Pomeranian – howls mournfully. I roll my eyes; that dog spent most of April and May howling and whimpering, bundled as it was in a ridiculous sweater knitted by its doting owner.

I decide to join the growing melee in the compound. After all, the arrival of the monsoon is no less than a festival!

On the ground level, the air is incredibly humid. I can feel tendrils of hair clinging to the nape of my neck. I almost wish I were back on the terrace, admiring the open sky with my pigeon to keep me company. Down here, the birds are twittering frantically as they swoop and flit back to their nests to take shelter before the clouds burst. A red-whiskered bulbul sings gloriously from its perch on the flagpole in the compound. I hear the familiar twitter of the coppersmith barbet, a brightly coloured green and red bird with a personality far exceeding its size. The barbet is an old acquaintance of mine, a frequent occupant of the guava tree I use as my personal eatery. Crows caw raucously, and a pair of pigeons coo a response from their nest atop an air conditioning box. It seems that all of Mumbai’s residents are suffering from a bad case of pre-monsoon jitters.

The watchman taps the ground with his umbrella. ‘Not much longer now,’ he says knowingly. ‘The sky is as tight as a tabla. The clouds are sure to burst soon.

‘I can smell the rain!’ a little boy cries. He sniffs deeply. ‘It’s much stronger now, Kaka!’

‘The monsoon is almost upon us,’ replies the old watchman. He shakes his umbrella at the children. ‘Be prepared to rush inside when the rain begins to fall, or you’ll catch a fever.’

The children giggle. Rain seems like a distant dream, even as the thunder booms louder and the wind whips my skirt into a frenzy.

‘Look!’ a voice shouts, and as one, everyone turns to stare at the southern sky.

A curtain of rain is sweeping towards us!

The rain shadow sweeps in from over the Arabian Sea, and fishermen rush to pull their boats high up on the beach. As the misty veil approaches the metropolis and the clouds drop lower, people pause and look up to the skies. The humidity makes sweat bead on foreheads, but people crowd in the streets, eyes fixed on the approaching curtain of rain. Here too, we stand shoulder-to-shoulder, our eyes never leaving the oncoming rain shadow.

The clouds burst with an almighty roar and people scream and rush for cover. As the rain pelts down, rattling on the tin roofs of shanty houses and drumming on the bonnets of cars, children squeal joyfully and dance in delight. The watchman laughs, tilting his head to the sky and letting the rain roll down his face. The air is suddenly cooler, and the wind that makes the rain lash viciously against my skin has a definite nip to it. Everywhere I look, people are in motion – in the streets rushing home, hurrying to cover their goods on their open carts in the street-side bazaar, covering their heads with bags and hailing buses, or just dancing as the monsoon returns to the City of Dreams after an unbearable summer of heat and dust. The rhythmic striking of feet on the tar roads is a prayer of thanks.

Thunder rumbles over Sanjay Gandhi National Park and lightning flashes over Marine Drive. Flocks of bedraggled pigeons huddle together under bus stops and beneath trees while stray dogs splash in puddles. I slowly trudge into the lobby of our building, my heart full and my clothes clinging to my body, drenched with the tears of the gods. With the arrival of the rains, I am bathed in new colours – colours of hope, love, laughter, and the sweet promise of tomorrow.

Photo by Anubhav Arora on Unsplash

Priya Ranganathan is a student at the Ashoka Trust for Research in Ecology and the Environment, Bangalore. Originally from Mumbai, she has worked on human-wildlife conflict, habitat conservation, conservation education, and has assisted on two National Geographic-funded projects as a research consultant. Priya completed her M.Sc. from Duke University, where she focused on ecology in Indian landscapes. She uses her experiences to help shape her approach to conservation and bring a diverse perspective to the table. Priya is passionate about saving India’s wetlands, writing for conservation, conservation education, and using Bharatanatyam, an Indian classical dance form, to raise environmental awareness. Her most recent project is a free e-magazine, Youth for Nature, which strives to bring stories of India’s wildlife and conservation heroes to children.