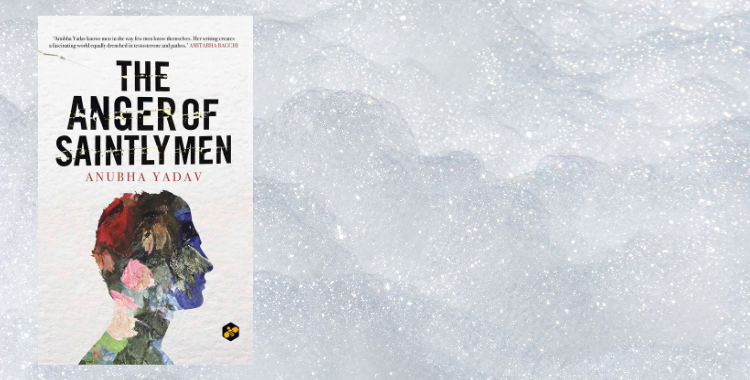 Anubha Yadav’s debut novel is a play of stereotypes and tags that constitute male upbringing, entitlement and survival in India. It’s a novel written in English but resonant with life in the cultural hinterland that is as much a geographical space as a socio-political determiner. It is through these filters that the writer presents the life of a family and its three sons ruled by the patriarch’s iron hand. In bookending the family’s collective life as well as the individual stories with the father’s presence, Yadav frames the narrative firmly within the patriarchal setup. The Anger of Saintly Men, woven together through interconnected stories, shot through with fantasies, dreams, hopes, moments of success, joy, and failure, curves along a trajectory of expectation, imposition and choiceless-ness that is intrinsic to this condition.

In travelling along this endless cycle, often, the men find themselves at the short end of the rope – psychologically, emotionally, physically depleted. Simultaneously, another presence looms large over the narrative, a search of mythical proportions that makes the journey predictable for the collective but momentous, perilous for the individual. What happens to the saintly man when he’s angry? The answer seems to arise partly in cultural memory, which evokes the image of the god/ man we worship as Purushottam. As I read the book, it is this cultural preconditioning that comes to mind again and again. There’s something to the word, the gravitas it evokes sets the bar high enough to be out of reach, rendering it alluring, aspirational, but, in the end, a Sisyphean task.

And thus, a sense of failure looms large over the lives in this book – social, worldly, material; failure to be the ideal son, father, husband, lover, friend. The only character who succeeds in what she aspires within the pages of this book is the mother. In toeing the traditional image, here is a complex, true-to-life character sans the sentimentality usually attached to the mother figure in Indian culture.

However, it is the father figure, the father complex that is the final determiner in the narrative. The book begins and ends with the father – father-son and back to son-father – with the precision and measured pace of short fiction. Nothing changes at the end, except memory. This last is an important, if grey, area within which much of our lives are played out, and this brings me back, full circle, to the concept of the perfect man (Purushottam), call it the “saintly” man if you will. The exemplar creates a claustrophobic trope, actions and reactions forever circumscribed by it, unuttered but eternal.

The many ideas and idylls of the Indian man coil around this story and its characters. Inability to meet this archetype can lead to many reactions, but anger, suppressed and compressed, ready to burst, is often one of the casualties. In recent times, there has been much talk of raising our sons better than we have over the centuries. It is a timely call, an urgent necessity. However, in the process, we need to remember that in sensitising our male population, we also have to be sensitive to what we have done to this section over the ages, the expectation loaded on to their shoulders, the sense of privilege and entitlement, the arrogance of gender and brute strength, the denial of, rather the condescension towards, softness, towards sensitivity, gentleness and spousal love. What we have created thus, is the cardboard cut-out of an image embossed upon our minds.

The Anger of Saintly Men explores this male terrain honeycombed as it is with these expectations. One of the most telling episodes from the narrative is of Saurabh (Sonu), the eldest son, commanded to punish his cousin’s abuser.

When I got home from school that afternoon, Anju and Mummy were sprawled on the floor, their dupattas lying on either side. Anju was howling and Mummy was consoling her and cursing aloud… Before I could ask, Mummy handed me her vegetable knife.
‘Go and fix that atta ki chakki wala. Tell that old man to behave his age. Give him one across his face. Harami. Cut him!’ I couldn’t move…. How could Mummy know my Hanuman secret? “Chakki wale uncle tttttttouched Anju didi ttttttthere.” Vicky stuttered as he pointed to his chest…. “What are you waiting there for?” she turned to look at me. “Go and fix him. Are you not her elder brother?”

Unknown to the mother, the man has also tried to abuse Saurabh; now he is called upon to safeguard his duty as the elder male cousin. Saurabh leaves home with the knife and returns without meting out the expected punishment, only its pretence.

Mummy rose swiftly from the floor and slapped me. “You should have died the day you were born, Sonu! Lying like this to your mother. That is how I have raised you? That is how you will take care of us.” No one spoke to me the whole evening.

We cannot look away from the abject humiliation that Saurabh feels, from his sense of defeat, of shame, anger and helplessness. As also when he gives in, repeatedly, to his father’s insistence on sex determination tests for his unborn child. The patriarch looms large, wielding control, calling the stakes, setting down rules that may not be defied, and if they are, then it is at the risk of losing family and home, as in the case of Vikram (Vicky).

Personal ideology is another battlefront on this unrelenting war field of authority and emotional manipulation. The only son who seems to pursue a personal ideology, a path different from what the father desires for him, comes with a stutter that shames the family, and with a political association that is unacceptable. This play between desire and reality, is conveyed in a voice that steers clear of the authorial, making the characters come alive on their own. For a debut, this is remarkable and carries traces of Yadav’s observation and experiences as a writer, academic and filmmaker.

Patriarchy engenders as well as demands a certain mard attitude, behaviour, responsiveness, and certainty, an institutionalised approach to the “norm”. Homophobia is another embodiment of this institutionalisation.

… Anu decided to distance himself from Nikhil slowly. Also, Anu had to deal with the problem of Nikhil sharing his hostel room. Perhaps he could put in an anonymous complaint, Anu thought. That the room was being shared by a day boarder without intimation or permission…

Masculinity’s edges are not always smooth or handsomely rugged. The jaggedness leads to insecurities. A college broadsheet, for example, discussing the male organ is enough to disorient. The man’s notion of his maleness is challenged again and again, in different ways, and responses need to be readjusted. The incident of the college broadsheet is a masterstroke that highlights the tug-of-war between the sexes, one that need not be, but that is another ideal, and one that is yet to be.

Anger is always at the periphery, waiting, simmering, and vents are more than welcome, whether by becoming a “bhagwa”, or pursuing political ideology even if against the family’s wishes. There are as many ideas and ideologies as people in a country, but within, the family seeks uniformity – of opinion, attitude and inclination. The episode of the incarceration, torture and subsequent escape of Vicky and his friends, plays out surreally, almost like fantasies of young men, but in gliding along the borders of the real and the surreal, it turns, subconsciously, into a metaphor for manliness, rebellion, of breaking through, finding freedom.

This is the story of a family, told in the distinct voices of three brothers, across three sections – Saurabh (Sonu), Anurag (Anu) and Vikram (Vicky). In trying to accommodate representative stories and voices, the narrative suddenly bends inward in the chapter titled “He Became Ochre” , locating a different voice, a different perspective. It is a story to be told, but it could have been a tangential one, without the shift that arises neither organically nor can be justified structurally, an arbitrary movement that dilutes the form as well as the author’s non-interventionist presence.

Saintly men defer anger. Between being “saintly” and “angry”, society leaves men with privilege but little choice. The book does not absolve the male, but it gives us a way to look into their world. The anger, the desire, the urge to be different may forever bubble under the lid. The Anger of Saintly Men tries to lift the lid a little and look closely at the simmering bubbles, beyond the smokescreen.