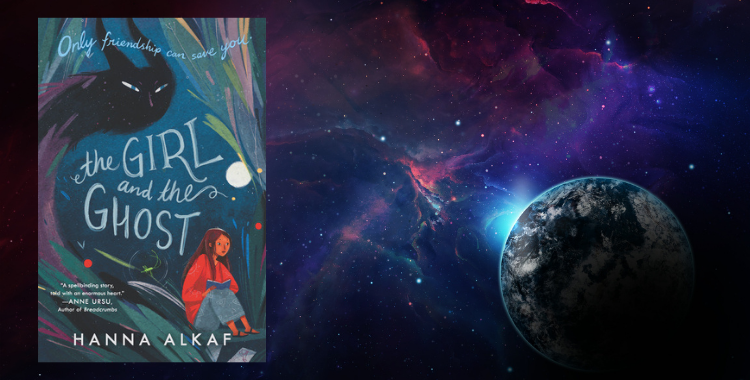 Hanna Alkaf is a writer from Malaysia where the legend of the pelesit originated—in Malay myth, a pelesit is a shape shifting spirit usually under the command of a master. Though Alkaf is a writer of novels for young adults, her choice of ghosts, monsters and traditional healers as a theme is so invested in the exploration of the subconscious, the book would have universal appeal for all age groups.

In The Girl and the Ghost, the pelesit’s mistress—an old witch of small time wicked deeds and estranged from her daughter—has just died. Since a pelesit must have a master to control his natural appetite for destruction and chaos, he hunts for the witch’s family and finds the surviving members in a distant village. At first, he sees the witch’s daughter but finds no appeal in her tired, cold air. He then notices the granddaughter, Suraya, who is still a toddler. He is struck by the contrast between the witch’s song which was rough and raucous like ‘the musical howls of drunkards stumbling home’ and the child’s song which wrapped the ghost ‘in a tender weave of comfort and belonging and glorious wonder, sweet and innocent and intoxicating.’

What sets the tone for the book is something more, something that is the leitmotif of the book: as the pelesit watches Suraya sleep peacefully, he gets the sense that he is in the presence of greatness, ‘that he was teetering on the precipice of something bigger than both of them’. He seals his allegiance to the girl by nipping her little finger and drinking exactly three drops of her blood, after which he quickly seals the cut. As constant companion to Suraya, he initially appears as a grasshopper. When she insists on seeing him he reveals his true form: horned, scaled and monstrous. The little girl is unfazed and looks at him with the same naked curiosity that she trains on everything. Then she proceeds to christens him Pink, based on one of her crayon colours, for she is an inveterate artist who likes to put down her emotions on paper. She experiences no warmth from her weary mother, and is friendless, confessing to Pink that other children thought her and her drawings weird.

Pink’s protection of Suraya is assiduous, as in her early years, she vents her emotions through wild adventures in nature. Alkaf creates a foundation for this friendship, which will go through great future upheavals, in the poetic lines: ‘When he offered her the spirit of friendship, loneliness provided a field so fertile that she buried it deep in her heart and let it grow and grow until it filled her and patched over the broken bits and made her whole.’

In Pink’s own voice, Alkaf tells us again and again that pelesits have no heart and experience mostly elemental feelings such as anger and revenge. They can neither control nor help this. In the village, Pink had already unleashed swarms of mosquitoes on children as punishment for marginalising Suraya. But it’s when she grows and goes to school in the big town that the drama begins to unfold.

Two girls, Kamelia and Divya in particular, unleash a volley of cruelty on Suraya, from verbal to physical assaults—fresh bruises bloom on her thin body from spiteful pinches, well-timed pushes and a hard kick on the shin. Signs of greatness begin to glimmer in Suraya’s capacity for endurance. Pink, unbidden, exacts revenge: a stone appears mysteriously in Kamelia’s pristine white shoe; she is hit nine times in a row at volleyball; a highlighter explodes in her hand and, finally, both Kamelia and Divya get a lice infection so severe that they must have their beautiful hair shorn. Suraya again shows another sign of her innate goodness; she questions Pink’s ploy of giving them back the same pain they gave her, with the words: ‘Because then that makes me no better than them. That makes me a bully too.’

Into this suffering appears a silver lining in the form of the new girl, Jing Wei. Though self-sufficient, belonging to the tribe of ‘haves’, addicted to Star Wars and the Lord of the Rings book series, Jing offers Suraya a robust, adventurous and enlivening amity that fills Suraya’s soul-need for friendship. Pink feels sorely neglected and is insanely jealous. His thoughts appear with all the distortions of a ghost spirit capable of blind violence: ‘Jing was a poison, a virus that had worked herself into Suraya’s life and taken root. It was only his duty to cut her out before she did any real damage.’ This thought leads to a cycle of revenge attacks that end with Jing suffering injuries—a broken arm and several weeks of hospitalisation.

Suraya asks Pink to go, not realising that the pelesit would now turn on her. Alkaf warns the reader: ‘The problem with parting ways with a friend, particularly when that friend happens to be a supernatural being, is that they often take out their displeasure at your decision in ways that go far beyond the realm of human possibility.’ First there is the smell, so rancid she cannot eat; then nightmares, not merely of strange and horrific creatures, but of twisted versions of reality so she has trouble distinguishing real from unreal, swathes of time lost in a blink; the assaults are aimed both on body and mind till, despite rare courage and endurance, Suraya is forced to tell her mother of her situation.

When a doctor’s intervention yields no results, the mother calls a pawang hantu—a spiritual health practitioner. This is the beginning of the descent into real evil and power-hunger, because the pawang, appearing to help Suraya, has other plans. He sees a chance to enslave Pink and add him to his repertoire of bottled slave-monsters. It is here again that Suraya’s intuition works, primarily out of her innate love for Pink. She knows the pawang will hurt Pink in making him disappear. She re-unites with Pink in her quest to learn what lies behind the pawang’s slick façade. Here Alkaf puts forth the danger in Pink’s wise words: ‘There are many monsters in the world who hide their darkness beneath a mask of piety. Call yourself a religious man and nobody will question you; do it well enough and you can stab them in the back, again and again and again, while they nod and say it is all for their own good.’

The quest now begins in earnest—to save Pink from the clutches of real evil wherein the master can cause uncontrolled damage. Here Jing joins the mission and points that they should first find out how Pink came into existence. She scoffs at Suraya: ‘Have you learned nothing from Star Wars? The only way Luke could defeat Darth Vader was by knowing howhe became Darth Vader. When he knew that, he could figure out how to defeat him, by tapping into the person he used to be.’ Pink helps by telling them how a pelesit is made: ‘To make a pelesit, one would need to dig up the corpse of a recently deceased child and place it on an anthill. Then when the scurrying feet and sharp teeth of the ants make the dead child cry out, you would bite his tongue from his mouth, say a special incantation, and bury it where three roads meet, for three nights.’

The girls decide that to be safe, Pink must return to the grave from which he was taken. Says Saraya: ‘Maybe reuniting him with the rest of his old self will give him peace.’

The novel escalates into a race to find Pink’s grave, with evil forces in hot pursuit. It’s at the graveyard that the novel reaches a crescendo where there is not only the most terrific struggle between good and evil, but dark family secrets come pouring out, with every ghost and monster coming alive in stark manifestation. This happens in a great rush, a great fantastical rush. It leads to an all-round catharsis expressed poignantly by Suraya: ‘But Mama broken mothers raise broken daughters. Did you not see how we could have filled the parts the other was missing? Been stronger, together?’

There is reason to believe that Hanna Alkaf’s novel has universal appeal. It is a hero’s journey into the unconscious—from feelings of friendship one takes the plunge through deeper and deeper layers of the psyche. Surface protection and comfort is stripped off, exposing one to hostility and revenge, to aridity and lovelessness, to deceit and megalomania and to secrets that must be seen through to their roots before there is hope of love and union. For if the roots of the difficulty are sought, there is opportunity for love to exercise its humanising power at a deeper level than is ordinarily available. The acceptance that comes is a sort of eating away of the evil—very different from repression or denial. Small wonder then that Alkaf begins her book by hinting at Suraya’s greatness.

Neera Kashyap has had a career in social & health communications. She has authored a book for young adults, Daring to Dream (Rupa & Co.) and contributed to 5 prize-winning anthologies for children. As a writer of short fiction, poetry, book reviews and essays, her work has appeared in several international literary journals and poetry anthologies. Her book reviews have appeared in Kitaab, The Bangalore Review and The Quiver Review. She lives in Delhi.