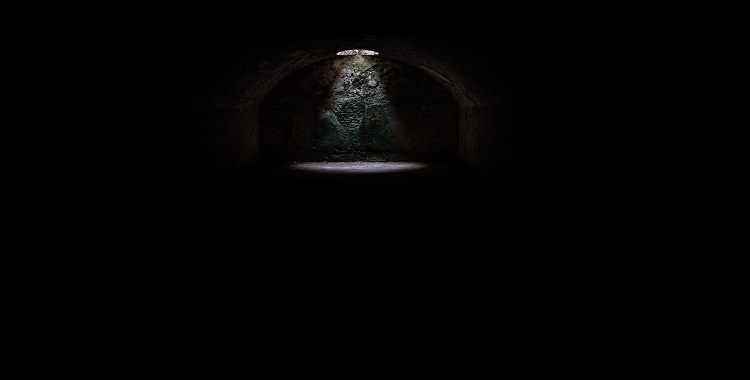 The soft, wet grass beneath our rain boots made squelching sounds as we straggled behind the tour group led by a small, dark-haired, Italian woman. She led us up a mound to the steep steps leading into the black mouth of the ‘Catacombe di Santa Priscilla.’ It was late April and the Italian weather forecast had been rain, rain and more rain. But on that day, we were promised a break with low hanging grey, overcast skies, to remind us, it was only temporary.

The guide stopped at the entrance and turned around to the mostly middle-aged, reverently silent tourists. All I heard her say was, “Now, this is the place where…”, when my pig-tailed four-year-old daughter, Elaine, clutching onto her pink, ‘Hello-Kitty’ purse, burst out in a shrill voice, “Mommy, do we have to go down there?” she said, pointing to the ancient chasm. As if choreographed, every head in the tour group turned and focused on us.

“You’ll have to keep your daughter quiet back there,” the disembodied, irritated voice of the guide snapped from behind the gawking group who stood between her and my family of four.

“Shush, Elaine,” I said, pressing my index finger to my mouth, while the people in the tour returned their gaze to the guide. “I promise, this is going to be fun and won’t take long,” I whispered, exchanging a glance with my husband, Scott. He grimaced and held Mark’s hand, our six-year-old. It was Scott’s idea to come here, something to do on a boring Sunday afternoon while living in Rome, at a time when babysitters aren’t available. “Don’t miss seeing the frescos in the Catacombe di Santa Priscilla,” he had read to me from our guidebook. “They are a must see.” But what the guidebook failed to indicate was that it wasn’t a must see for two small children.

The group continued ahead of us, and when it was our turn to climb down the 2000-year- old steps into the dank smelling catacomb, Mark cried out, “It’s really dark in here,” which caused one of the tourists to hiss, “Shush.”

Scott knelt at Mark’s side and turned his cellphone’s flashlight on, “There, it’s not too dark anymore. You can see in front of you. Let’s just keep walking and catch up to the group.” Thankfully, the tour guide had stopped again, just inside the mouth, but I never heard what knowledge she shared with the group because just as I arrived, the tour moved deeper into the catacomb with Scott and Mark trailing behind them.

The weak tunnel lights made seeing two steps ahead of me impossible, I stopped and let go of Elaine’s hand for a moment to search for my cell phone which had dropped to the bottom of my purse. My fingers journeyed through a myriad of tissues, pencils, papers, and candies before I found it. Turning the cell light on, I shone it onto Elaine’s face, her lower lip was turned up in a pout, “Mommy, it’s scary in here,” she said, raising her arms demanding to be picked up.

“It’s okay, there’s…” I stopped mid-sentence as a cold shudder ran through me, “nothing to fear.” I bent down, held her shivering body next to mine and lifted her into my arms. Beaming the light ahead of us, the catacomb was a long, winding, narrow tunnel, as if a large earth worm had slithered through it. On either side of the walls were the empty burial beds where Christians, two-thousand years earlier, had left their dead family members to rest. The beds were dug two feet deep into the walls, sometimes layered one above the other. There were countless small beds for babies.  They triggered in me the memory of my first child’s grave. Eric, my little angel, died at the age of two. “Mommy let’s go,” said Elaine trembling in my arms. The light from the tour was evident in the distance. It threw human shadows against the mud walls. As we approached, the faint figure of a small child floated past the tunnel entrance. That’s strange I didn’t see any other children in the tour. I gave a quick glance behind me. Do I turn and take Elaine out of here? Why did Scott insist on bringing us here? He knows I hate graveyards! I beamed the light higher, making the shadows spring to life again, the atmosphere was heavy, thick and threatening. We must be getting close to the tour. I rushed forward and on reaching the tour, Scott turned to me, “Did you get lost?” he asked, but before I could answer the tour guide announced, “We will now move on to view the frescos. Keep up everyone.”

The group shuffled forward like a chain-gang. When I looked down, expecting to see Mark holding Scott’s hand, I saw nothing. “Where’s Mark?” I whispered to Scott, who was turned away from me and listening to the guide. I nudged at the arm of a man standing next to Scott, “Have you seen my son?” he shook his head and gave me a bewildered expression. It was useless to ask, I shone the cell light behind me to chase away the darkness, but fear wrapped its long, skeletal arms around me, and my mind played tricks. For a second, I swear I saw the burial beds all filled with wrapped bodies. My breathing became shallow and my mouth dry, “Mark, Mark,” I called as loud as I dared. I was walking away from the tour, with Elaine in my arms, calling all the while, “Mark, Mark, where are you?” Tears rolled down my cheeks, this can’t be happening, how could we lose him in a tunnel? Again, I saw the weird human shadows on the walls, it was the shadow of the same small child I had seen earlier. I felt like I had to follow it. It led me down a tunnel I hadn’t seen earlier.  It had candle lights on the walls. I pressed on and that’s when I saw the form of a child wrapped in a white blanket. It looked like Eric’s small form after he had been pulled from the water, someone had wrapped him in a white blanket. What’s happening, why am I seeing this. Where’s Mark. I approached the body. Is this for real? I had to see what was under the blanket, was it, Eric? I lifted the blanket from where the head was and there staring up at me was the skeleton of a small child. “Agh,” I screamed.

That’s when I heard Mark, “Look at me, Mommy!” I turned the light in the direction of his voice. Mark had climbed onto one of the child-sized beds and was lying on his back, dead still with his arms at his sides in a corpse pose, eyes closed.

“What are you doing here?” I asked him.

“It’s okay Mommy, the little boy brought me here. He said we could play.”

“What little boy?” my eyes flitted around the room. There were no children, but I could hear a child’s giggle. My eyes  spun round to Mark, but the laughter didn’t come from him.

The thick air, the shadows and my fears twirled  the world like a spinning top. I dropped to the ground.

Semi-conscious, with my eyes closed, I heard Mark and Elaine, close to me, say, “Wake-up Mommy wake-up.” And somewhere, in the room but distant from me, I heard the tour guide, “Will she be okay? Can she standup? This wouldn’t have happened if they had stayed with the tour. This part of the tunnel is being used for a party later in the day. I hope they won’t be upset when they discover the skeleton was uncovered.”

I could feel Scott rubbing my shoulder, “Come on now, wake up,” he whispered. I opened my eyes. He swiftly helped me to my feet. Mark and Elaine each grabbed one of my hands and led me to follow the tour guide down the tunnel. With everyone around me the feelings of dread dissolved. My children and my husband were safe with me and somewhere, I was certain, Eric was with us too. When we reached the rest of the tour, the guide returned to her monologue, “These frescoes date back to the third and fourth centuries…”

Photo by Jez Timms on Unsplash

Alice G. Waldert is a poet and short story writer. She worked for twenty years as a humanitarian officer for the United Nations in Africa, Italy, and New York. She now teaches English literature and writing at Westchester Community College. She lives with her children and husband in White Plains, New York.