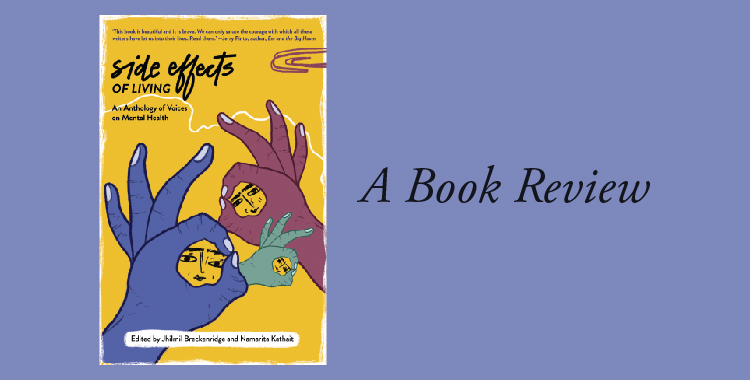 Side effects of Living: An Anthology of Voices on Mental Health (Edited by Jhilmil Breckenridge and Namarita Kathait)
Publisher: Speaking Tiger

I grew up in a small town in the North East of India. An oil town, where the primary source of entertainment was socializing in each other’s houses and parties in the club. In almost all these social dos, the pattern was similar- I managed to find a corner where I would barely be noticed and stayed there till it was time to leave.

On most of these evenings however, I had the blue mountains- the Patkai, for company. With these mountains there was no need to feel awkward or the necessity of saying the right thing that wouldn’t be frowned upon. With time, my social education was complete, I had learned to say what was necessary rather than what was true. I learned that most people actually never wanted to know how you were, when they asked you – ‘’How are you?’’ Over the years I learned to make up different things just to startle people when they asked me how I was. Other than on a few occasions, the narrative never changed, people felt awkward when you told them you weren’t well or that you wanted to talk about why you weren’t feeling alright. Over the years, I also discovered that I wasn’t the only one and it was all about finding the right people who cared to listen.

In the past few years, there has been significant talk about mental health. Whether it is celebrities or regular people, the stories from the dark pages of people’s lives have tumbled out. But as is the case with society, the jokes about mental health are not too far behind. There are Whatsapp forwards and drawing room discussions that warn us about those who apparently take advantage of, or try to portray mental health issues in order to draw attention to themselves. What is entirely missing in this narrative is a sense of empathy along with an understanding of what it actually feels like to go through such a state, where the pain, the voices, the trauma and loneliness are not mythical but rather painfully real.

Side Effects of Living – An Anthology of Voices on Mental Health, as the name suggests is a one of a kind, special narrative that showcases the plight of those who have been affected by mental health issues. The anthology has essays, poetry, short stories and sketches from people who have either been diagnosed with mental health issues or those who have seen others with such issues from very close quarters.

Jayasree Kalathil, one of the contributors sets the tone rather intuitively when she talks about building a community that can understand and acknowledge the problems of mental health – ‘The idea is not just about people holding different beliefs about reality, but about the possibility of different realities co-existing, which some may have access to while others do not.’ Jayasree who is a writer, researcher, translator, runs Survivor Research. In her essay titled, Learning to Live in Non- Consensual Reality she says, ‘As a mad person writing about madness, people have often asked me for my ‘’recovery story’’ or ‘’illness narrative’’. I don’t have one. I continue to have experiences that have been diagnosed as ‘’mental illness’’ and understood as ‘’mad’’, but the story of these experiences does not follow the symptom-illness-recovery trope. For me, the story of madness is in the meaning we make of it. The meaning I have finally come to make of my madness is predicated on the socio- political contexts of my life, my immediate communities, and the politics of ‘’the normal’’ and ‘’the pathological’’ that defined our lived worlds and reality.’

As you delve into these stories that are often heartbreaking, lonely, frightening and yet somehow full of hope, you begin to realise that the set of cases highlighted here form only the tip of the iceberg. Take, for example, Anika Ghei’s poem – My Depression and I, where she writes-

My Depression and I, we sleep together.

He’s not into the sexual side of things

so sleeping for us is him holding me close-

close enough that my starting and his ending blur.

Through the pages, it becomes clear that this is a desperate call for being heard- one that cannot be ignored anymore. The pieces are a mixture of the philosophical, painful, amateurish and sometimes extremely raw- you understand that this is a book which speaks of mental health just as it is. There is no aim to curate, to make beautiful, and that in turn becomes the measure of its successful narrative. Sample here a monologue that Garima Palawat has with society-

“I gather courage. My bravado reaches its crescendo, as I try to find the right words to serve the platter of socially acceptable answers.’’

‘’Tired how?’’ you inquire carelessly.

‘’I am tired because this darkness of your ignorance bites me, pinches me, whispers sinister words into my ears, and bleeds me dry till I gasp quietly in my solitude.’’

In the larger scheme of things, every problem needs a home where the individual can confide in and feel safe. These stories of mental health patients/survivors are not as much about illness as the need to look inwards, to reach out and be inclusive in our approach towards people within our own circle and outside.

Wellness and healing are not individual processes but thrive, and are better dealt with collectively or within one’s own community. Feeling distressed about traumatic experiences or rebelling against culture, tradition or family are not only non- pathological, but often form a path to finding one’s rightful place in the world.