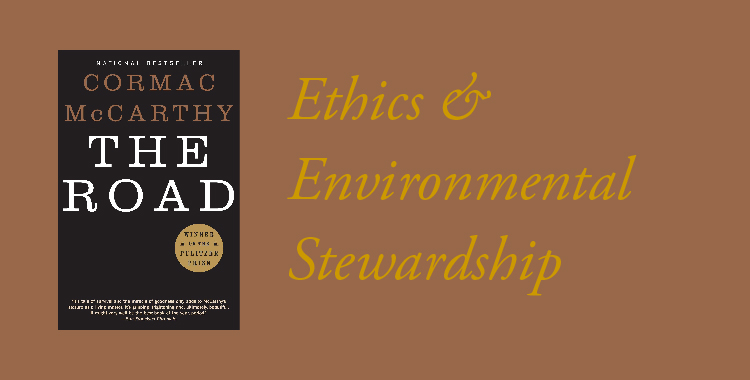 Cormac McCarthy’s The Road can best be described as an exploration of human complexity in the wake of life-threatening conflict. It follows the story of a father and son, both of whom grapple with difficult questions about meaning and morality as they search for safety in a post-apocalyptic wasteland. (Spurgeon). Critics have often claimed that the novel promotes an angle of moral ambiguity, as there are recurrent moments during which characters are faced with significant ethical dilemmas (Lilly). Yet, although there is undoubtedly morally ambiguous symbolism present within The Road, that doesn’t mean that the overarching ethical stance of the novel is one of moral ambiguity. In fact, one might argue that the novel takes an objective ethical stance, specifically regarding humanity’s treatment of nature. After analyzing The Road using the theories of ecocriticism, psychoanalysis, reader-response, and deconstruction, it becomes clear that McCarthy’s novel, while feigning moral ambiguity, conveys an objective message about ethics, the environment, and what will become of the world if either is neglected.

Before contemplating the novel’s moral implications, it is important to know a bit about McCarthy himself. Although McCarthy is now hailed as one of the greatest writers of the twenty first century, he was once quite obscure and unappreciated. His novels, while critically acclaimed, only sold a few thousand copies and failed to infiltrate the literary scene at large. Additionally, many readers found his earlier works to be needlessly gritty and disturbing. Yet, towards the late 2000’s, McCarthy’s work began to gain traction in the literary community, even climbing to the top of best-selling lists (Cremean).

Although McCarthy was born in Providence, Rhode Island, he likely draws a large portion of inspiration from his upbringing in the southeastern United States. When McCarthy was young, his family moved from Providence to Knoxville, Tennessee where McCarthy’s father worked as a lawyer. Fascinatingly enough, as a boy, McCarthy was never fond of school work, but instead invested his time in a myriad of hobbies and interests, the most notable of which was nature and the environment (Cremean). It is no wonder, then, why so much of his work is set in the southeast, his descriptions vivid and evocative of natural albeit charred landscapes. Mindfulness of McCarthy’s biographical background will be greatly beneficial moving forward in the analysis (Cremean).

Transitioning into psychoanalytic criticism, the man in the story makes for an interesting spectacle of inner turmoil. All throughout the novel, he can be observed ruminating over tough moral questions. Specifically, towards the end of the narrative, when he and the boy seem to be encountering more wandering survivors than ever before, he struggles to determine how exactly he is to interact with them. To put things in Freudian terms, the man’s id clearly wishes to cause harm to his fellow fugitives, even people who seem innocent or who don’t have any resources left. Nevertheless, it is the man’s son who acts as a filter for the man’s moral decisions. As the boy becomes upset nearly every time the man threatens a wandering traveller, the man is often faced with a moral dilemma: will he follow his survival instincts and do harm to the people they encounter, or will he allow them to escape? Although the man harbors ill will towards nearly everyone he and the boy encounter, he usually chooses not to go through with the desires of his id. In this way, the boy acts as a catalyst for the man to listen to his superego rather than his id, and the boy himself functions as the man’s ego, filtering his actions with moral convictions and expectations.

In keeping with the theories of Freud, it is worth noting the various dreams that the man has throughout the story and contemplating the meanings behind said dreams. The man’s dreams are primarily presented in two forms: tranquil and horrifying. He dreams of peaceful landscapes and pleasant memories shared with his wife and son, while at other times dreaming about death and destruction, often envisaging the rotting corpse of either himself or his son. Fascinatingly enough, the man seems to possess a certain awareness of the meanings behind his dreams, and they are not what one would expect. Rather than making the assumption that the pleasant dreams are a good omen while the disturbing ones signify danger, the man assumes just the opposite. In fact, he warns the boy not to succumb to pleasant dreams for, according to him, pleasant dreams are a symbol of surrender to and acceptance of death. One could argue that this interpretation of dreams as warnings about death is a result of condensation, as single images are attached to meanings that would normally seem unrelated. Whatever the case may be, it is clear that the man sees great value in his dreams and tends to use them as a guide for making decisions and exploring his unconscious thought.

Although the man in the story undoubtedly experiences the most inner turmoil of the two protagonists, there is merit in examining the boy’s psychological state. As Loren and Dent suggest, there is much more to a person’s psychology than mere conflict, and the sum total of a person’s life experience is to be carefully considered when conducting a psychological analysis (Dent). Upon the boy’s introduction to the story, it becomes quickly apparent that his arc revolves not around his own inner struggles, but around the inner struggles of others. The boy himself seems to have a very clear-cut view of morality, as exemplified by his reactions to the violence enacted by both his father and other characters. Take, for instance, the man and the boy’s interaction with Ely, an old man they encounter while venturing down the road. When the man seems extremely hesitant to offer Ely any food or clothing, the boy becomes extremely upset, even though it is obvious that the man does not lack compassion and is only trying to protect his son from potential danger (McCarthy 162). Needless to say, the boy holds little regard for the intentions one may employ in order to justify their actions. He cares only about the objective goodness or evil of an act and, in this way, he seems to exhibit little to no moral conflict in the story.

Thus, it has been demonstrated that the man undergoes a significant amount of inner turmoil while the boy retains a morally black and white perspective. Yet, what does this demonstration say about the moral implications of the novel itself? Before answering this question, it is worth noting the role that the boy plays in the man’s life. The man himself admits at the beginning of the novel, in rather cryptic terms, that the boy is his life force: “If he is not the word of God God never spoke” (McCarthy 5). Keeping this in mind, perhaps McCarthy is suggesting something about the nature of ethics in the boy’s moral objectivity. Given the fact that the boy serves as the man’s sole source of hope throughout the novel and even ends up surviving, there is something to be said of his grounded moral perspective, which stands out in a world full of moral ambiguity. If moral ambiguity seems to end in destruction in McCarthy’s vision, then what is implied by the survival of the ethically objective person?

When it comes to ecocriticism, The Road lends itself to a surplus of fascinating landscapes and images. One such example is its portrayals of charred trees, rotting human corpses, and masses of land desecrated with multiple layers of ash. Upon reading such graphic descriptions of environmental demise, the reader is naturally prompted to question what event led to such a disastrous outcome. Yet, interestingly enough, McCarthy only ever hints at the nature of the novel’s apocalypse, never revealing the cause outright. While so few details are given, it can be inferred that the apocalypse likely came about due to natural causes, as everyone on earth seems to be affected by it and all the devastation seems organic in nature. This being the case, one has to wonder why McCarthy chooses to write about a naturally occurring apocalypse rather than one that came about due to war or some widespread human conflict. Favoring a natural apocalypse is doubtlessly an intentional choice, and it stands to reason that McCarthy wants to make a statement about humanity’s treatment of the environment.

One of the most prominent exemplifications of McCarthy’s message can be found within the descriptions themselves, which give human-like characteristics to nature and trigger the reader’s empathy. “The country was looted, ransacked, ravaged. Rifled of every crumb” (McCarthy 129). These powerful adjectives evoke the image of a landscape that is in ruins not only because of an apocalypse, but because of the greediness and savage inclinations of human beings. The earth groans out in response to having its landscapes pillaged for the sake of human profit. If narrative can serve as a glimpse into the symbiotic relationship between man and nature, then McCarthy’s imagined earth is doubtlessly an adverse one in which humanity rummages and nature punishes (Oppermann).Perhaps McCarthy is refuting the old rationalist idea that nature owes humanity its resources and should be dominated.

Julianne Bankston is a student of English literature with a concentration in publication and editing at The University of North Georgia, Dahlonega.