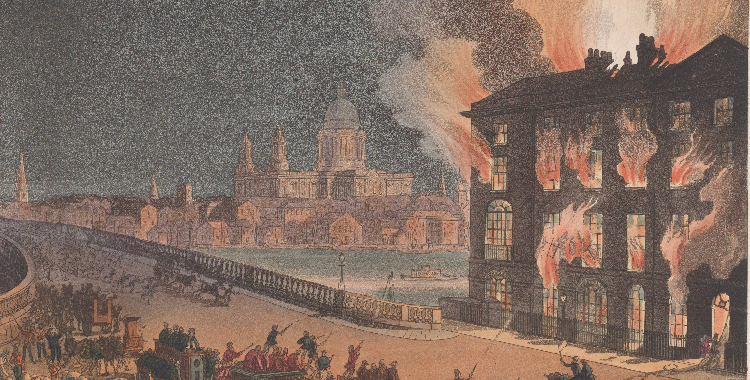 The old sow glared at Elrod with a sort of benign insolence. It was perhaps the ugliest thing the boy had ever seen. Its skin was patched with stringy hair and covered in sores. Festering wounds and scars from violence tracked its flanks and its crusty teats swung from its belly like wayward pendulums. One eye was smoky with glaucoma, the other was bulbous, enflamed, and skittered about nervously. The immense pig’s legs were strangely petite and none of her hoofs were cloven, which gave the impossibly kosher beast an almost biblical air of foreshadowing.

The hog snorted with mirthful rage, as if taunting Elrod to try his worst.

The Widow Haskins had offered Elrod five dollars to move the sow from one pen to another. Easy money, he thought. Already, Elrod was calculating purchases and movie showings for Saturday night, taking out Martha Jean and stealing furtive glances at her bowling ball-sized breasts.

Elrod rubbed his hands together methodically. “Don’t get too fer ahead,” he told himself. “Ye ain’t got it yet.”

He proudly walked over to the gate, which led to the other hog enclosure, and swung it open. The sow never moved, but followed Elrod’s movements with her one good eye. When he climbed the fence and stood opposite the hog, Elrod noticed the razor-like teeth jutting from its malevolent mouth. He started to second guess this task but a quick vision of Martha Jean flashed through his mind and spurred him onward.

Elrod marched toward the hog,who matched his steps backwards. Nearly cornered, the sow plopped down into a mudhole and stared arrogantly at him. Elrod took a running leap, but the pig skittered away like a shot and the boy landed face first in the mud.

Elrod sat up spitting mud and cursing under his breath. “Ye big’ol bastard.”

He climbed back over the fence, marched towards the slop bucket, and pulled out a half-eaten ear of corn. Elrod reentered the enclosure and approached the hog with the ear of corn outheld. “Here piggy piggy,” he said mockingly. “Here piggy.”

They circled like two drunken dancers. In that glycerinous muck their motion seemed invested with a slow and colloidal inertia. He tried to entice the pig, but it only complemented his reeling footfalls. The sucking mud snatched one of Elrod’s shoes, and it was swallowed up in the filth. The boy continued to shuffle crablike around the pen, and the pig followed opposite. When the hog came upon Elrod’s missing shoe, she picked it up and commenced to chew it into pieces.

Elrod threw his head back and howled in outrage.

In frustration, Elrod slung the ear of corn and it hit the pig between the eyes. The pig sat back on her hind legs and squealed before buring her head in the mud and consuming the whole ear of corn.

The hog looked at him with a sort of sardonic bemusement.

Elrod turned to the gate and saw a length of rope wrapped around a wooden peg. The idea of lassoing the sow hit him all at once; he stumbled over to the fence slathered to the waist in mud and shit. His face completely covered like a clay mosaic.

Elrod fashioned a loop and approached the haughty pig. He swung the lariat twice over his head before throwing the rope. It landed perfectly around the hog’s neck, so the boy pulled the lasso taut.

The sow laid down on its belly and nestled securely into the mud. Elrod tugged on the rope as hard as he could, but the pig scarcely moved against the leash. He walked the rope close to the pig and got behind the massive animal. The hog lay flat against the earth. He watched in dumb amazement as the sow’s tail moved in quick circles like an excited dog.

From behind, Elrod took a running start and drove his shoulder into the hog’s hunched back. The beast didn’t budge, so the boy began beating the pig about the head with his clenched fists. Finally, Elrod clapped the sow on both ears, booming a hollowed ringing sound. The hog rose and sprinted towards the fence line. Elrod was suddenly yanked up and dragged around the enclosure twice. The end of the rope had wrapped around his ankle and he was bucked helplessly into the muck.All whileElrod screamed invectives of violence and murder.

Then, suddenly, the hog stopped – gasping for breath – and turned on his adolescent tormentor. Elrod’s eyes bulged, and his heart sank. He knew what was about to follow. “Great God Almighty,” he screamed as the pig charged him.

The concussion of pig on man sounded like a pistol shot. Elrod’s vision of the world turned upside down as he flew through the air, landing on his neck in a pile of slop and excrement. “I’m kilt, bygawd!” he cried crazily. “Lord Jesus take me, I’m kilt!”

Elrod’s arm burned like something afire. He craned his throbbing neck and looked aghast at his forearm. The skin was peeled back to his bicep and his whole arm was covered in mud, slop, shit, and blood. He rose unsteadily and looked wildly about for the evil hog as a chill traced up and down his spine. Everything was humming. Elrod couldn’t stop shaking and felt on the verge of passing out.

Beside himself with fury, Elrod saw visions of pulled pork and sausages. The devil’s sow rotating on a revolving spit. “Damn shoat,” he hissed.No way he could lose a match of wills with a swine. Elrod noticed the rope was still wrapped around the pig’s neck before spying the widow’s aged Ford 9N tractor sitting adjacent to the enclosure under a willow tree.

“Now we’ll see who’s smarter,” he yelled at the pig.

Elrod stumbled like a drunk through the mud towards the fenceline. He used all his remaining strength to pull himself up and over the wooden rail. His body slapped down hard on the ground and he lay on his back breathing heavily. Then, Elrod started to weep like a child. He reached over and slowly rolled his ripped skin back onto his forearm. The pain was like being burnedwith a firepoker. For a long time, he couldn’t move. Eventually, he rolled onto his stomach and tried to rise. He bowed his back like a woman in the throes of contractions. Using all his strength, Elrod stood and, finally, loped off towards the tractor.

The keys were in the ignition. He tried to start the tractor, but it only coughed twice and died. He pounded the steering wheel and cursed the machine up and down. “Yer useless, rotten, piece of crap,” he hollered. “Ye oughtta be put outtayer misery… Well, me too if this don’t work.”

Elrod tried the ignition again and, on the last kick, the tractor coughed into life. The boy raised his hands skyward like some crazed penitent and called out full majesty towards his God. “Praise God from whom all blessin’s flow!’’ Elrod intoned. He shifted the machine into drive and set off down the road towards the outer fence.

As he pulled up to the pig enclosure, Elrod saw that it was empty and he jumped off the tractor in absolute horror. The machine was still in gear and continued its bumpy journey down the drive. His whole life seemed to revolve around the hog, as if every moment from the day he was born had led to this. It was the great demarcation point between the then and now.

He hopped the fence and scanned the empty paddock. How he’d lost the pig was beyond his comprehension. He foresaw years of chasing the hog, going from city to city with a wanted poster. Ten-thousand dollars dead or alive. He’d spend his life following every trace and crumb. He had visions of how the pig would show herself and permit him to almost catch her, before escaping from sight. Elrod would grow old and sowless until the day he died. Would the hog finally return and attend his funeral, he wondered? Would the pig weep at his passing, his mortal enemy gone to the grave at last?

Then, Elrod looked towards the inner gate that led to the second enclosure and saw it swinging gently in the breeze, wide open. Like some maudlin mad-mad, Elrod ran through the muck to the other pen. There, in all its piggy glory sat the sow. It glared at him with jeering derision and chewed happily on a turd. Elrod dropped to his knees in thanksgiving. “The Lord giveth,” he wept, strings of snot dangling from his chin. “Thank ye, Jesus. Thank ye God.”

There was a loud explosion off to Elrod’s right, but he didn’t yet turn to see the widow’s house ablaze. The tractor had run pell-mell into the old woman’s living room and tipped over, spilling gas and oil everywhere. Within minutes the whole place was spitting fire.

Clay Anderson is Adjunct History Professor at Reinhardt University. His forthcoming publications are 'el Nagual' in the Fourth World Journal and novel, The Palms, by Adelaide Books. 'The Snake Preacher' was a finalist for Adelaide Literary Award for Best Short Story of 2018 and also published in the Adelaide Literary Award Anthology vol. 2. Clay presented his short story 'The Eye' at the Popular Culture Association 2019 National Conference in Washington D.C.