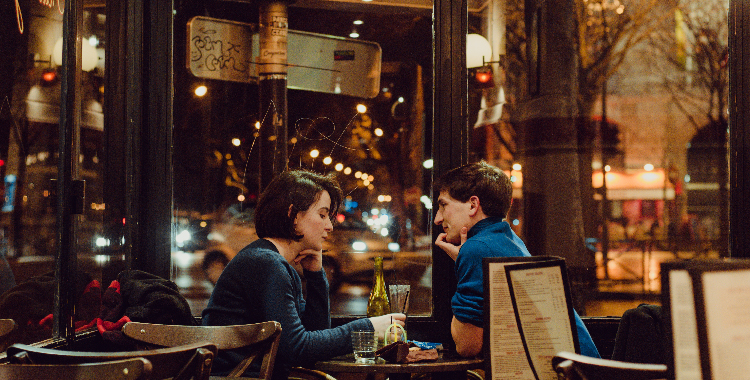 He wasn’t as good looking as the man she’d always hoped to marry, but she recalled her therapist’s unsubtle hints that she shouldn’t wait aimlessly for a strong jaw to express interest in more than a one-night stand. Maybe if they had children, the kids would inherit her bone structure. They could have his eyes, the greens of which were reasonably interesting in her estimation. It was while imagining their green-eyed, high cheek-boned little boy that Alana realized she was not listening to him over these last two minutes of uninterrupted monologue.

“—so that’s why you have to live for today. The moment. You can’t wait. Take that chance. Shoot your shot. You know? You want a six pack? Better start doing crunches now. Want to feel good? There’s a smoke shop right next door. What’s stopping you? Want a better sex life? Well, Shriny, they’ve got pills for that.”

The awkwardness hung in the air like a third member of their date, mouth agape and eyes wide staring at him. Alana didn’t know that none of what he had just said was from his heart. It was performance art. He was just being Shriny. She should have been disgusted – frankly turned off – but for some reason, she felt a hint of adrenaline rush through her veins.

“Shriny’s an unusual name,” she said after what felt like eons of silence.

He paused, wondering how Shriny would answer that question. Obviously, nobody’s born with the name Shriny so there must be a story about it, Jason concluded, but he wasn’t clever enough to think of anything that would live up to the nickname on the spot. Without letting too much time pass, he fell back on an old habit of his own, which is to try to associate himself with large numbers of cooler people.

“I guess it was Goocher and Schnizz that first came up with it, and well, Tom Brady once signed a ball made out to me as Shriny so – ”

There was something so different about this guy, Alana thought. As she listed his unattractive qualities – his manner of speech, his pudginess, even his choice to pop the collar on his pea coat – she realized that while he wasn’t polished at all, somehow it worked for him.

All the other guys she’d been out with over the last six months had been so clearly crouched in their first-date job interview posture. When they meet a never-married 36 year-old woman online, she’s aware that they know they’ve got to play along under the premise of a long term game in order to have a shot at hooking up that night. What results is an endless series of loin-numbing approximations of eligible bachelors pretending to look like they want to settle down. Alana had gone on so many one-and-done dinner dates with people she thinks should have been accountants, even when in reality they were space-architects and trauma surgeons. She began to wonder if there actually was anyone genuinely interesting left out there.

Maybe she would have to wait until the next round of divorces before she would find her man. He might even have children already from the prior marriage. That would be fine. She had been to enough baby showers over the last five years that she felt like she had a sense of how all that worked. CVS had even started sending her promotional discounts for diapers, wipes, and butt paste so she already had that going for her as a step-mom.

“Tom Brady! Wow!” She faked as best she could.

Jason didn’t know much about Tom Brady, but he knew that most girls from Massachusetts had a thing for him. Football wasn’t much of a passion for Jason, except in his work where he was a postdoctoral researcher studying traumatic brain injuries in professional football players.

His instinct was to tell her that after so many years in the NFL, it was likely that Tom Brady’s brain may already show signs of several concussions under an MRI, but he recognized this as something Jason Pensen, PhD would say, and he had resolved to expunge Dr. Pensen from the evening’s guestlist since he apparently had no game. He hadn’t received a single Hoo-Hoo – the dating site’s term for an invitation to chat – and he had managed to use up his entire allotment of free Hoo-Hoo’s on women who didn’t respond to his messages, not even to bother rejecting him.

He had inspected his profile to investigate for where he’d gone wrong. Pic seemed fine. He was ten pounds lighter and his receding hairline was cleverly concealed but Jason understood that to be par for the course on these sites. Hobbies included hanging out with a dwindling number of friends, watching sports, reading, taking in an occasional museum. He had a promising career.

It was during this inspection that the text messages to someone named Shriny began coming in to his cell:

How had he ended up on this list and why did they think his name was Shriny?

On and on they went for lines and lines, always unclicked. Jason felt just a whisper of pride having shown that restraint knowing that only a fool would click on the links, obviously a gateway to a scam or virus. Who would click on these links? An idiot. A fool. A … well … a man who went by Shriny.

Who was Shriny? Shriny was a guy with a dating profile that projected ignorant confidence. It featured a pic of him doing a keg stand from college. His gender was listed as “Alpha.” His hobbies including hitting the gym and the beach in that order before catching up with Hollywood A-listers for a nightcap. “Family is everything, but dreams are built by an Army of One.”

Jason smirked at his creation’s absurdity, but it wasn’t half an hour before the Hoo-Hoo came in from Alana. Three nights later, they were sitting at Dentora Café for an early dinner meeting for the first time. If Alana was expecting Shriny, that’s just who he intended to offer up.

As the evening went on, they began to feel the remotely familiar sensations of puppy love each had begun to forget. Their hearts pattered, and as dumb as Shriny sounded, Alana felt more drawn to him with each passing sentence. By the time entrees were served, they were holding hands at the center of the table. Their eyes were locked and each imagined the kiss they would share at the night’s end.

The waitress delivered the check, and they both reached for it.

“Fuck no,” Shriny asserted pulling the check away from her. “A man pays for his woman.”

So sexist, she thought, but also I could get used to it.

As Shriny counted out just enough crumpled dollar bills to leave behind, Alana whispered that she was heading to the ladies’ room and then maybe they could head back to her place.

Jason’s heart skipped a beat at the mere thought of it.

Twenty seconds later, her phone buzzed on the table. It was a notification from CVS.

Your child deserves nothing but the best and that’s why we’re offering Cuddles Overnights 30% off! Click here for more details.

Panic clouded Jason’s frontal lobes. A child? With a peek over his shoulder to make sure she wasn’t coming back, he picked up her phone and clicked on the link. It brought him to a page that showed her purchase history in the last year as having bought six sets of diapers, three boxes of wipes, and one jar of butt paste – which from the label appeared to be something necessary for happy babies.

What the fuck was this? She’s a single mom? He’s cool with it, he told himself. Well, he could be cool with it, but she withheld this very essential information, which was not cool. This was so not cool. He had to call her out on this when she got back from the restroom, but how?

And just then, Jason stood up. He casually put his coat on, making sure to pop his collar, and strolled out of the restaurant without saying a word.

Across town, in a rented room with spotty internet access, a rotund man with severe dyslexia named Michael Shrinerson was scouring the internet for pictures of beautiful women. He was very lonely. He existed in such solitude that when pop-up ads jumped onto his screen, he clicked on them, and when they asked for his contact information, he typed it in if only to feel wanted just for a moment.

Adam Philip Stern is an assistant professor of psychiatry at Harvard Medical School with recent essays in The New York Times, The Boston Globe, the New England Journal of Medicine, and the New York Post. He is the author of Break: A Novel and Shrunk MD (vol. 1), a book of cartoons.