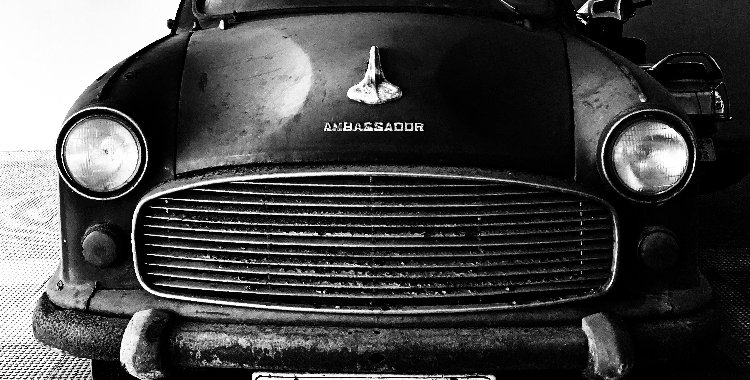 In common with probably tens of thousands of other visitors to India, my first encounter with the chaos of Indian traffic was made from the back seat of an Ambassador. These icons of the Indian roads, the first cars made in India and modelled on the British Morris Oxford, have been rolling off the production line since 1957, but a recent announcement suggests that this [2014] is likely to be the final year of production of this unique car by the Hindustan Motor Company.

For many years the Ambassador was the vehicle of choice for leading Indian politicians and diplomats, eager to demonstrate their loyalty to national industry, and these rumbling masters of the tarmac (those small areas that can occasionally be found between potholes!) were often fitted with “luxury” items such as interior fans and curtains. Sadly those days have gone and it was noticeable that in the recent election campaign the leaders of all political parties, including the newly elected Prime Minister Narendra Modi, chose to parade around the country in flash air conditioned SUVs.

I remember with great affection the arrival of myself and Sara in India in the summer of 2000. Leaving the airport to be slapped around the face by a blast of heat, we were affectionately greeted by Sudha, who was to steer us through our first uncertain days in Chennai. Following her across the airport carpark, through a maze of sleeping bodies, roguish looking dogs and vendors squatting on their haunches selling a range of wares we eventually met a driver, who having deposited our luggage in the boot urged us into the rear seat of his car. From the front bench seat Sudha assured us that at this early hour of the morning the traffic would be light, and we would soon reach our destination in Greenways Road.

With a slight judder and a cloud of black acrid fumes we were soon under way and making ponderous progress into the streets of Chennai, driven by our bare footed chauffeur who appeared at times to be wrestling with an oversized steering wheel. Meandering around a hundred obstacles, including cattle, goats and tight muscled, sinuous men pushing handcarts, surely loaded way beyond their safe capacity, we settled back on the leather seat for what we were soon to learn was a typical Indian city journey. Skilfully our driver eased the vehicle through gaps that appeared to miraculously part before him as with great nonchalance he negotiated the route into Chennai city. Before long we came to realise that in India when they build a car they must follow a particular order. The importance of the horn is such that I am convinced that this is the very first component to be made, around which all others are gradually constructed. The continuous cacophony of blarting horns is a sound for ever associated with the roads of India and to this day provides a grating, discordant symphony that is the background to urban Indian life.

During that first journey our curiosity was immediately aroused and questions to Sudha caused her some amusement. “On what side of the road is the driver supposed to drive?” we enquired “Well, really on the left, but basically this is not always possible, so wherever there is a space.” “How many lanes are there on this road?” not too unreasonable a question I thought. “Well officially two, but the road is plenty wide enough for more,” we were informed as the traffic inched forward, vehicles often six or more abreast, through the heaving procession of cars, colourful painted lorries, smoke belching buses, auto-ricksahaws, handcarts, wagons pulled by cattle, cycles and motorcycles, often bearing entire families . “Are the roads always this busy?” “This is the quiet part of the day, later the traffic will increase greatly.” So continued our incredulous conversation until we reached the quiet of Vasanta Vihar our destination amongst the relative tranquillity of trees and lawns in the heart of Chennai.

Gradually after the initial shock and a few days of finding our way around the streets in an auto-rickshaw we became inured to the chaos of Indian roads and now, eighteen years later, when incidentally the traffic is far worse, I have become, in common with most of the locals, a genuine fatalist, taking to the roads in cars and auto rickshaws with the naïve nonchalance of a traveller who has become complacent in the face of ever impending danger. Though I cannot say that I am ever totally relaxed!

These days when climbing aboard a taxi in India it is more likely to be of modern European, Korean or Japanese manufacture, fitted with the latest sound system, air-conditioning, power steering, seat belts and a reliable set of brakes. Ambassadors are still seen, and it is noticeable that in some instances these are treasured by their owners, immaculately maintained and driven with pride. An ever dwindling number of Ambassador taxis are in operation, I have used them over the past couple of years from Trivandrum airport and in Panaji, but it seems that most taxi drivers and probably their passengers too, aspire to something more plush and modern.

Last year in New Delhi with my good Indian friends, Jayashree, Johnson and Lisba we were faced with a considerable choice of vehicles on the taxi stands in the city. Perhaps it was just nostalgia that enabled me to persuade my patient colleagues that a rotund and shiny, black and yellow Ambassador was a better choice than one of the slick modern cars that also occupied the row of awaiting taxis. The choice as it happened was a good one, for this car was piloted by an excellent Sikh driver who clearly new the streets of Delhi well, we took his cell phone number and kept him busy for much of the week. Bouncing around the worn springs of the bench seats we experienced a ride similar to that which I imagine many of India’s great names from the past, Jawahrala Nehru, Indira Gandhi and Rajiv Gandhi amongst them must have endured over many years in order to demonstrate their patriotic commitment. Today, whenever I see one of these magnificent machines on the streets of Jayanagar I am almost inclined to salute. I am glad to have had this opportunity to experience a genuine piece of Indian history, and even now I hope that the affection that many have for this most recognisable symbol of the roads of India may enable it to be saved from oblivion. However, I fear that the continued rush towards modernisation may mean that in a few years we will be mourning the death of the Ambassador.

Photo by Vishnu Prasad on Unsplash