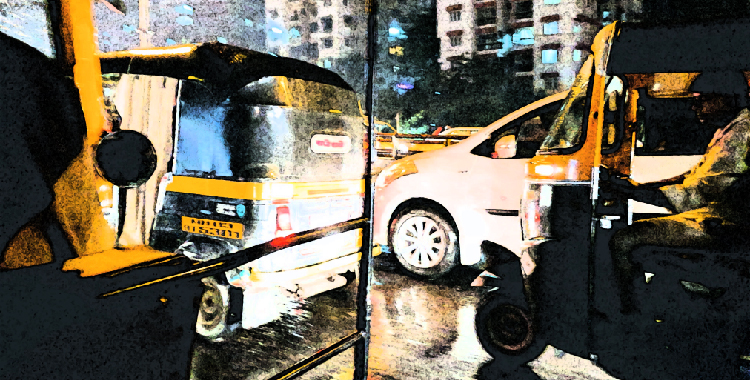 The buzzing in my ears seemed to come from a long way off. Feeling distinctly alarmed I stuck my forefingers deep into my ears, closed my eyes and attempted to induce the  popping sound that would indicate my ear drums were still in working order.

It didn’t work. I opened my eyes and stared at the back of the driver from hell who seemed oblivious to my plight. Seconds before he had driven his auto rickshaw at breakneck speed into a pothole that was filled with rainwater. By the time the front wheel whooshed out of the pot hole, my backside had done a two feet lift-off from the seat and my head had hit one of the iron rods that held up the concave roof.

Immediately after  stars showed up in my vision, the buzzing in my ears began, followed by a dull throbbing pain somewhere in the vicinity of my cerebral cortex which no amount of rubbing would ease.

I held on for dear life as the raging monsoon lashed on all around me. The driver seemed to be getting an unnatural kick out of driving over potholes; I could tell by his gleeful forward hunch over the handlebar. Every once in a while he would grab a dirty cloth from the side and wipe the windshield, which in my opinion he didn’t do often enough.

We barely missed crashing into several vehicles and pedestrians with umbrellas; at least that’s what I thought, though James Bond at the wheel seemed supremely overconfident of his driving skills. When he finally stopped at my street, I paid him grudgingly and staggered out, letting a few cold raindrops fall on my bruised head. Then I opened my umbrella and walked home unsteadily.

I am fairly certain most of my obsessive compulsive issues have been birthed right here in one of these three wheeled killer contraptions.

Resembling fat little yellow and black beetles, auto-rickshaws shuttle through the highways and by lanes of India, in sunshine and thunder storms, their cramped interiors transporting millions of people in various cities. Their drivers come in all shapes, sizes and temperaments – most especially temperaments.

I have described the  wannabe James Bond already.  Ouch!

Lookout for the drunken one. It is supremely important to look at the drivers face ‘before’ getting into an auto-rickshaw, no matter how much of a hurry you are in. Unfortunately, on one particular ill-fated day, by the time I matched the motion of the veering vehicle to the bloodshot eyes in the mirror, it was a bit too late for me. Too chicken hearted to jump off a moving vehicle, I simply grit my teeth and prayed. When I glimpsed my destination, I yelled at the driver to stop. He did try…only he couldn’t. To my horror, he drove the rickshaw straight into a roadside shoe shop where it hit the display of shoes in front. In the commotion of flying shoes, angry voices and dust, I didn’t wait to find out who won the street fight that followed.

The Disco Lover  has a small misconception that everyone who rides in his auto-rickshaw automatically shares his love of loud music. He has a recorder and two old speakers positioned to carry maximum sound to the back. He aims to give you an out of the world musical experience (groan) that comes with psychedelic lights as added attraction. Fellow commuters on the road are drawn by the blaring music (noise?) and grin when they see your mortification, especially if it’s a popular South Indian song with heavy sexual undertones. When you reach your stop, you’ll either have a splitting headache or be dead from acute embarrassment.

The Newshound loves to chat about all the latest news gleaned from the TV and his daily dose of newspaper headlines. I don’t really mind this type, unless of course the ride is really long.  Well informed also means he is exceptionally adept at cursing the politicians for the bad roads and the inflation. The angrier he gets, the faster he drives. One such driver explicitly told me once, that every murderer on the planet would have a place in heaven, but there would be no place in heaven or hell for the politicians. Petrol prices were at an all-time high during this tirade. If you value your own safety, its best to gain a few brownie points by cursing a few politicians of your own.

Unbelievable as it may seem, some drivers move like snails.  These drivers are quite old and possibly even a little deaf – why else would they not hear the din of the huge bus overtaking too close for comfort? Their autos are also prone to putter and stop quite a few times. I once made the mistake of requesting one such driver if he could maybe go a ‘little’ bit faster? For the next ten minutes he subjected me to a long (and sarcastic) lecture of how people complain about fast drivers and then didn’t appreciate the ones who drove slowly and safely. That stung!

Keep a sharp lookout for the  fall apart machine.If you’re wearing glares on a sunny day or if the vehicle is cloaked under cover of darkness, it’s easy to miss the perils that await you in this one – worn out seats that have pokey springs, rusted interiors (get ready for that tetanus shot), rattling side mirrors and faulty horns; or as I experienced in one rickshaw, no horn at all, which means no honking. Honks are what warn people to jump out of your vehicle’s way when you tear through a lane and when you don’t honk… well by default, you get a steady stream of abuses hurled at you.

A group of teens whom I am acquainted with told me the story of the English speaking auto driver they met once.  The driver agreed to take the four of them (against rules) but must have regretted it when he was at the receiving end of unwanted and excessive teen chatter, that too in a confined space. I believe he stopped the rickshaw and told them angrily – in impeccable English – to either get out or shut up as their chit chat was driving him crazy. Incorrigible as they are, the teenagers later said he just wanted to show off his English. I think the poor fellow already had a headache and their incessant chatter must have only made it worse.

If you’re not a local, you cannot be too careful or you will literally be taken for a ride.  He knows you’re a tourist or a visitor from another state and will take you round and round and it’ll be quite a while before you get to your destination, by which time the meter would start to show anything between a 100 to 500rs depending on where you’re from. It helps to let him know you’ve googled your destination and have an accurate idea how many kilometers it is to get to your destination. Yes, you’re allowed to smile when he deflates like a pricked balloon.

Then there are the ones who never have enough change to return. If it’s only a few coins, part with them and say goodbye. But if he tries to scam you for a larger amount don’t give in. Ask before you hand over the note. If not, he can just drive off without giving you back your change. Does not happen very often though.

The challenges of riding in these auto-rickshaws, has obviously not killed me yet, but it has definitely made me resilient. This heart of mine has yo-yoed between stopping and beating quite a few times and I’d like to think it beats a bit more strongly now. Then there’s the constant jostling around of all those muscles when the rickshaw goes in and out of potholes – kinda like the feeling you get when you just come sweating out of the gym – and you don’t even have to pay extra for this workout.

But I’d rather use these autos than get into crowded trains and buses at peak times. There have been countless times when I have parked my car in a convenient spot and then take a rickshaw to the more congested parts of town. For the locals, it’s also the fastest way of getting from point A to point B in the shortest possible time, unless of course you’re riding with ‘the snail.’ There’s no underestimating this mean machine on three wheels – it has the power to make you remember your mortality on every dangerous turn on the street.

A few years ago, while traveling in Egypt, I felt a rush of patriotic spirit on spotting Indian made Bajaj rickshaws on the roads. I don’t know if the spirit of Speedy Gonzales resides in these machines, because the drivers in Egypt seemed to be one up on the Indians, taking their frenzied rickshaw driving to a whole new level.

I have spent the major part of my life (close to three decades) in the Middle East where commuting is done cocooned in the comfort of air-conditioned cars on smooth roads. Yet what I miss the most when I’m away from home are these three-wheeled rickshaws and their reckless drivers. Every time I travel in them my initial exasperation melts seamlessly into that comfortable feeling of ‘coming home.’ What’s more, by now, I am an expert at classifying the ‘type’ of driver and adjust accordingly.

The trick, my fellow human beings, is to hold on for dear life…somewhat the way you hold on to your sense of humor in the wake of impending doom.

Photo by Malhar Garud on Unsplash

Shaly Pereira is a freelance writer, blogger, and habitual traveler based in Oman, who loves to write about people and places. Shaly writes travel stories, fiction, and personal essays. She has been published in Oman Today, SacParent, Fiftiness, Afineparent.com, Parentco, Epicure & Culture, SheKnows, My Itchy Travel Feet, Sonderers Travel Magazine and in an Anthology titled ‘In Celebration of Sisters,’ up for sale on Amazon.