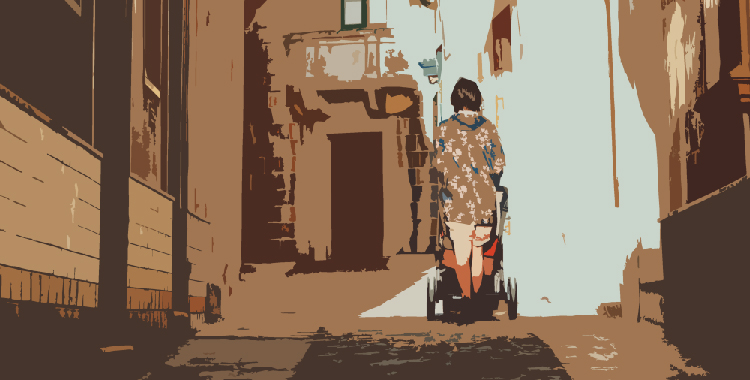 Nakul sat straight in a vest with two holes in it and old pajamas. He didn’t make eye contact with his wife Tarla who was flipping pulkas at the stove. Tarla knew why. He had ejaculated too early the night before and after getting an erection that had been long overdue. Of course, he blamed the premature burst of passion on her. The child birth had made her less attractive, he claimed. He’d looked at her body with disgust while shrewdly avoiding her eyes. She could’ve bet her entire DVD collection that he’d struggle to get it up even if it had been Rekha standing before him.

In front of him, the one-year-old Jeet – named after his grandfather – gurgled and drooled. Tarla kept the plate piled with food in front of Nakul.

“What is this?” Nakul asked.

“Watch your mouth. Don’t try to be smart. The food is burned, can’t you see?”

Little Jeet burped and Tarla leaned down to clean the spittle. Seeing that he had lost her attention, Nakul swept the steel plate off the table. It fell down with a clang. The fried okra scattered and the pulkas lay in a single crumple. Tarla lifted little Jeet and walked away leaving Nakul with the mess. The lack of respect! Nakul seethed. Well, no one, and certainly not him, would be cleaning up the mess so she’d better get down to cleaning it herself. They had to let go of the cook and the maid and the gardener. Business wasn’t good and he was in debt. His heart beat faster. He hunted in the chest of draws for the little flask of whiskey that he had sneaked in. Yes, he had to sneak it in, to his own house. He couldn’t handle the expression that appeared on Tarla’s face every time she looked at him. She saw what his father had seen in him so many years ago, he was sure. He took a swig of the whiskey. He paced the room. He could not have his wife disrespect him like this in his own house. He kicked the chair and it fell with a loud crash. That damn woman.

His brother had called last week offering money. He was sure that Tarla had gone behind his back and talked to his brother, telling him of their financial problems instead of handing over her gold. He knew a Marwari who would’ve given him a loan on the gold. Once the business was up and running, he could get the gold back for Tarla. But no, she had refused. He had explained the logic of the gold standard. Her keep all these years had been against her gold reserve that could be sold off in case of contingency, he told her. Her response had been to keep the gold under lock and key. A twelfth pass, what had he expected! He pulled open a shelf and began flinging the little jars out. Some burst open, spilling their contents on the floor. He went through each shelf methodically until all the shelves stood bare. Satisfied, he went looking for Tarla.

“The kitchen needs your wifely attention, Tarla,” he’d tell her with a smirk.

He looked through each room and she was nowhere. In their bedroom, the cupboard doors were flung open. Clothes were missing. He rushed to the safe and the jewelry was missing. His son too was gone. Nakul breathed heavily and staggered into the kitchen where he slid on the okra-covered floor. His bottom covered with fried okra now reduced to mush, he leaned against the wall and cried for the first time since Papa Pandey’s funeral.

Tarla pushed the pram with little Jeet down the street. He sucked his thumb. Normally, she’d pull it out but she let it be. In her other hand was a suitcase that she dragged behind her. She hailed an auto. She had been patient with Nakul. She could do without their lovemaking. She could cook and clean without any help. What she could not handle was Nakul’s refusal to seek help. He was going down and he was taking her with him. Where was it that she had heard this? Trying to save a drowning man could mean he’d pull you down with him. She was sure it was one of the soap operas – oh, the life lessons one could glean from them – but which one? Never mind. Tarla loved life. She was not going to be drowned. Her mother had dismissed her concerns as drama.

“Have a baby. It’ll teach him responsibility,” her mother said when Tarla first told her about Nakul’s growing disinterest in his business.

“Your place is with your husband,” she said when Tarla had resisted going back to Nakul after she had the baby.

“Talk to his brother,” she had advised. A fat lot of good it did.

The auto jolted and shook her and the plastic and too-orange Hanuman suspended from the mirror. She steadied her breathing. The auto pulled up in front of her parents’ house. She braced herself for the reaction. She pulled the suitcase and the pram out and set them on the pavement. She reached for her purse and realized that she didn’t have it with her.

It was then that Tarla realized that she had been crying. Snot dripped down her nose. She nodded a thanks, wiped her nose with the end of her dupatta. She rang the doorbell. There was no answer. Strange, the cars were all there. She rang the bell again. She thought she saw a face peer through a window and disappear. She banged the door harder.

Inside, her mother sat quiet, willing Tarla to go away. The shame, the shame of having a married daughter come back home like this. The temerity of that girl!

“No one, no one is going to open the door,” she had told the household.

Neighbors began to come out to see what was going on.

Neighbors began to gather around her. One of them asked Tarla to come to her house and wait.

Tarla shook her head resolutely. She invoked Kangana’s strength when her bridegroom ditched her in Queen. She looked around and spotted the boundary wall running on the side of the house. Kicking her sandals away, she swung herself on to the wall. From there, she hoisted herself onto the ledge and then clambered over to the balcony. The French windows hadn’t been locked just as she expected. Her mother needed the fresh air and the opportunity to eavesdrop on their neighbors. Her face streaked with dust, she entered her parents’ room. Her father sat rocking back and forth on a chair with a newspaper in hand. Her mother with a ball of caramel wool and gray needles, her fingers moving with practiced ease, while she searched her memory for the time  she had been dumb enough to make her child resourceful enough to climb walls.

Tarla’s father looked at her with remarkable calm like this was a common occurrence. She approached him and touched his feet.

“Live long, beta,” her father said. He continued to rock back and forth.

“Mama,” Tarla said in her mother’s direction. She received a nod. If their matching glares were stones being struck, there’d be fire.

Tarla walked past the servants and down to the main door. She brought in the suitcase and the pram with little Jeet cooing in it.

Photo by Ostap Senyuk on Unsplash

Anuradha Prasad is a freelance writer and editor. She writes short fiction and has been published in Muse India.