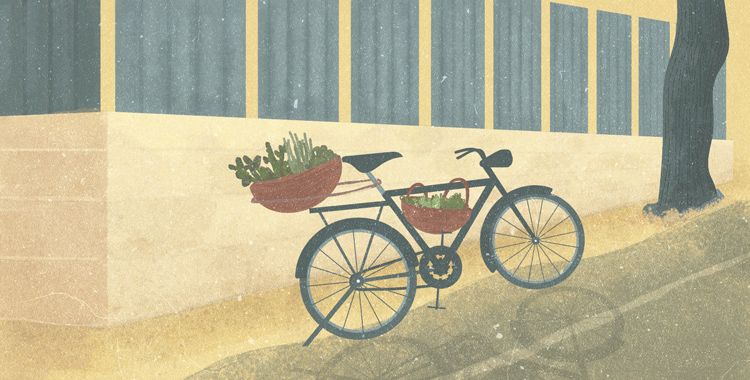 The English author Will Self, who until recently was a regular columnist in the New Statesman, has on a few occasions written about his predilection for exploring cities on foot. I recall, for instance, his vivid description of a nocturnal promenade with friends across London, and another account of him familiarising himself with the streets of Manchester. His assertion that if you really want to get to know a city, the pedestrian option is most rewarding, is one to which I certainly subscribe.
Bangalore confuses me. Just as I grow in confidence that I recognise particular streets or districts, something happens that shatters this illusion. However, I am gradually familiarising myself with the area of Jayanagar where I stay, and some form of orientation is gaining a tenuous foothold in my brain. Most mornings here before breakfast I explore the chaotic roads and potholed lanes a few strides away from my accommodation. These early morning perambulations have enabled me to form the beginnings of a mental map of this small quarter of Jayanagar. However, I still often find myself confused and lost amongst a maze of small houses, even smaller open fronted shops, assorted retail carts and a maelstrom of hurrying people making their way to somewhere from nowhere, or at least this is how it appears. At the same time, groups of lungi clad men slouch at street corners and despite an appearance of doing absolutely nothing, I suspect they are busily embarking upon business that I simply fail to recognise.
Each morning for the past week, I have headed out in a different direction, and this morning, as has often been the case, I found myself lost in the back lanes somewhere beyond Madhavan Park. I am aware that for many people, being lost is a state with which they are profoundly uncomfortable. Personally, I tend towards the view that as I am on foot, I cannot have ventured far from the familiar, and that a minor inconvenience such as not knowing where I am, increases my awareness and observation of the surroundings as I seek navigational clues. Like James Joyces’ Leopold Bloom, I invariably encounter interesting people, and eventually end up on familiar ground. I am inclined to say that there is no such condition as being lost, but only an opportunity to explore new places.
This morning the labyrinthine lanes were as always, bustling with activity. A man who looked as though he hardly had the strength to turn pedals was calling out his wares as he sold fresh herbs from the back of a teetering, overloaded bicycle. As he weaved his way between dogs, resting cattle and women sweeping the thresholds of their homes, a woman dashed out from a doorway to stop him and purchase from his sweet smelling goods. Two men, greatly animated, negotiating noisily over a heap of coconuts, were in all probability far less angry than they sounded, though I never stayed long enough to see the outcome of their dispute. Two women chased a dog away from their property, uttering what I can only assume to have been Kannada oaths, then shared in a joke together, laughing and proffering to each other the typical South Indian head shake.
All the while, as I twisted and turned, negotiating my way between cowpats and potholes, giving a wide berth to a pair of mangy looking dogs, I enjoyed the sights and sounds of these unfamiliar streets and the nodded acknowledgement of friendly strangers. Just as I was beginning to think that for once I really might be quite seriously lost, my reorientation was aided by chanting from the apparent near distance. Following the mesmeric sound, I at last found its source and immediately recognised the temple from which it emanated. A few turnings later and I was standing beside the Kitturu Ranni Chennamma Stadium watching boys in a makeshift game of cricket, and knew that the rear of Madhaven Park was only a few hundred metres away.
As I made my way back to my room for a shower and breakfast I found myself singing beneath my breath the famous words of John Newton – “I once was lost but now I’m found.” This is only a temporary situation and I look forward to being not quite lost in a different set of lanes tomorrow morning.

Before the cacophony begins

6.00 am. It is still possible to enjoy a relatively quiet stroll around the back lanes of Jayanagar, but only with an early morning rise and by avoiding the already scuttling main thoroughfares. This is the coolest part of the day, though within ten minutes promenade I have already built up a sweat. It is also the time when it is possible to be more aware of the immediate surroundings of the city streets, as slightly less attention is needed to the tangled traffic than would be advisable later in the day.
Whether you are of any faith or none, it is impossible to ignore the religious influences on this, and any other Indian city. This morning alone, during the course of ninety minutes walking I must have passed twenty or more gaudy coloured temples, a church and two large mosques. These are features of the beating heart of the city, and I am mindful of the need to show respect to those worshippers who are offering their morning oblations to a range of deities. Fire, bells and water are an intrinsic feature of Hindu blessings, and located at a discreet vantage in order not to intrude, I watch as a white robed priest manipulates a fiery brass tray before his earnest supplicants. A black Ganesh, jasmine garlanded, takes in the proceedings from across the temple yard, whilst Hanuman gazes down from above, possibly offering support to the priest, or approval to the gathered assembly, or maybe both; I remain ignorant of the detail.
I note that often men and women stop in the road outside of the temples, and remove their sandals before offering Namaskara, with joined palms. This traditional greeting is said to be an acknowledgement of the divinity to be found in all human beings. After a short mumbled prayer, these devout petitioners slip back into footwear and return to their daily business. Others enter the sanctuary of the temple offering garlands or money in exchange for blessings to see them through another busy day.
A little way along the road, I arrive in time to see the fevered activity of a dozen flower bearers as they prepare for today’s wedding ceremony at the Kalyana Mantapa. Hoardings have been erected announcing the bride and groom and welcoming families to the sacred nuptials. Already a musician can be heard coaxing a rasping nadasvaram into tune. His labours along with those of his fellow band members will be long but joyful today.
Amidst the religious iconography and ceremonial preparations for the day, individuals are scurrying about their early morning labours. A lady belies her frail appearance as she pushes a barrow laden with fragrant herbs in the direction of central Jayanagar, another bears her burden of mangoes secure in a large round basket on her head. A flower seller, transporting his load on a rusting bicycle, its chain parched of oil, calls loudly to announce his presence to what he hopes will be eager buyers.
I am an obvious stranger on these streets, standing out from others and at times a feature of some curiosity. Children here, as elsewhere in the world are more bold and less reserved than most of the adult locals. They approach with beaming smiles and the more daring sometimes speak, often with a simple “how are you?” They delight in receiving a response and run giggling to their mates to report that they have accosted a foreigner and received a friendly reply.
Outside of a few houses, elaborate rangoli patterns decorate the street; sadly within a short time they will be erased by passing feet, but at this time they are freshly made and welcoming in their intricacy. Lazy dogs sleep in odd corners, whilst others strut the streets and nose indelicately through litter and sacks of discarded detritus, in hope of half eaten fare. Some have adopted a strange air of superiority, seldom even glancing at the human elements of the ebb and flow of the streets. Although they always appear harmless, I am inclined to give them space as I pass by, thus probably justifying their assertion of supremacy.
This area has a number of small parks and children’s playgrounds. One I noted in particular this morning was well equipped with colourful slides, swings and roundabouts. My grandchildren would certainly have enjoyed these I thought. On a large open sports ground already I could count four games of cricket in action. I checked my watch which registered 7.10; these boys are keen, no wonder Indian cricket is so strong. The players range from those entirely dressed in the traditional white attire, using top quality equipment, and bowling at a full set of stumps, to others with improvised wickets, and a patched up wooden implement that might once have looked more like an authentic cricket bat, but now resembles a worn and well taped cudgel.
By 7.30, the noise levels have already increased. As I approach Sri Aurobindo Marg, the raucous blaring of horns and the rumble of buses and lorries increases in intensity. The calm of morning is fast disappearing to a familiar cacophony; relative slowness gives way to perpetual motion. My senses now are sharply focused on surviving the crossing of roads and avoiding the pavement potholes as I return to my room to shower and breakfast. Tomorrow I will set off in a different direction and wonder at the human hotchpotch of the lanes of Jayanagar.
***
Illustration: Shreyaa Krritika Das