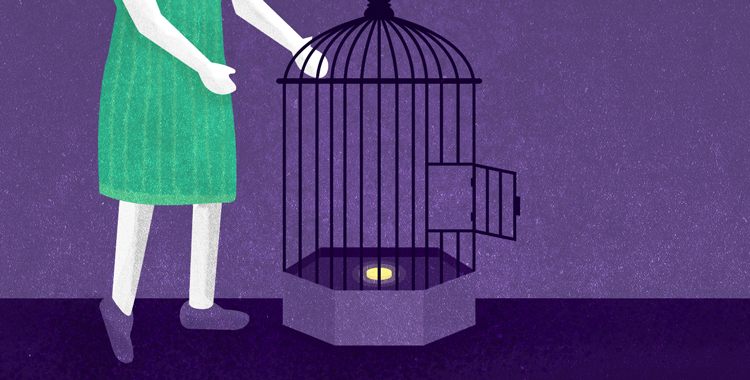 Genevieve wanted a leprechaun. She’d never held a leprechaun. She’d never even seen one, not a real live one, but when Papa spoke and when he held her close she knew they must be real.
Mama said, “Genny, dear, there’s no such thing.”
But Papa shook his head and lifted Genny onto his lap. He held her tight with one hand and waved his other arm in a wide arc conjuring a whole new world of fairies and sprites and leprechauns. When Papa spoke, and when he held her close, Genny felt the magic of the leprechauns.
I want that magic all the time, she thought. But how can I catch a leprechaun of my own?
She spent the rest of that morning thinking…
And devising…
And designing.
And when she finally made her plan she marched down the stairs.
She leaned in close to Papa’s ear. She whispered so Mama wouldn’t hear.
Papa nodded, took Genny’s hand and said, “Let’s go. I think this just might work.”
At the second-hand store Genny found the biggest, brightest bird cage.
Papa asked, “Aren’t the bars too–”
“Trust me, Papa,” Genny said and marched the cage up to the register.
Back at home Genny set the birdcage on the living room floor. She wrapped a wire around the door.
“Now,” she said, “we need gold.”
Papa opened up his wallet. “Fresh out,” he said. He pulled a penny from his pocket. “Will this do?”
Genny didn’t have much choice. She didn’t have any gold either. She wrapped the wire around the coin.
From the drawer of odds and ends she grabbed the ball of rubber bands. She tied one to the birdcage door. She stuck a pencil through the door and poked the coin.
The door didn’t move.
She tied a second and a third rubber band.
She stuck the pencil through the door and touched the coin.
The door barely closed.
She tied more rubber bands.
After five rubber bands Papa tilted his head.
After eight rubber bands Papa cleared his throat.
After fourteen rubber bands Papa opened his mouth, but before he could speak Genny held his cheeks. She touched her forehead onto his. “Trust me,” she whispered.
“But look.” He touched the pencil to the coin.
The cage door snapped.
The pencil broke.
Papa winced.
“Bath time,” Mama called from the other room.
“Keep your eye out. Watch for clues,” Genny said. “Tiny footprints, gold dust, orange hair.”
“But…,” Papa said and held the pieces of the broken pencil.
“Bath time,” Mama called again.
“Trust me,” Genny said again as she left the room.
During her bath Genny asked Mama if she had any gold.
“Have you looked in the drawer?” Mama asked.
“I already checked.”
“Try again,” Mama said. “Have a little faith.”
After bath Genny snuck into the kitchen. She opened the drawer, found a gold wrapped chocolate coin and began to wonder if Mama really did believe.
She crept into the living room, untied the rubber bands and replaced the penny with the chocolate coin. She retied the rubber bands.
She marched to the porch and kissed Papa good night.
“Any luck?” Papa asked.
“Not yet,” Genny said. “But have a little faith.”
Papa nodded and kissed her cheek, and Genny bounded off to bed.
In the middle of the night Genny heard the cage door snap.
She grabbed her flashlight and tiptoed to the living room.
The cage door was shut, and the coin was gone.
But the cage was empty.
No footprints.
No gold dust.
No orange hair.
No leprechaun.
She scanned the living room until she was sure then turned her flashlight off.
A minute later Papa sat beside her on the couch. “We’ll try again,” he said and lifted her onto his lap. “And this time…” he said and waved one hand as he talked about pixies and sprites and leprechauns.
And in the moonlight on the back of his hand she saw the red mark shining bright.
And in the corner of his lips she saw a chocolate smear.
And when he spoke of magic dust and fairy wings and rainbows and gold coins, and when he pulled her close to him she knew she’d caught her leprechaun.
***
Illustration: Shreyaa Krritika Das

Paul Rondema grew up in Oregon, China and Nigeria before returning to Portland, Oregon where he lives with his wife and daughter. His work has appeared in a dozen journals, magazines, anthologies and websites. He teaches middle school and coaches Track and Cross Country.