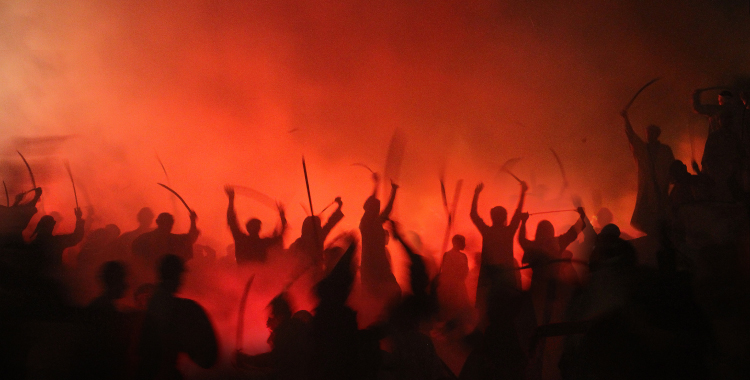 He was running wildly, panting for breath as his heart beat furiously like a terrified bird trying to break out of its cage. They were closing on him now but he dare not turn back to see how far away they were for fear of them seeing him. It was his beard, dyed red with henna that had singled him out as belonging to another faith by reason of which he had become the prime suspect. The target of the combined wrath of four men.
They had been incited by a person who had pointed to him shouting, “He’s the one. He did it. He insulted our God.” Armed with swords, clubs and bicycle-chains, they had given him the charge with the war-cry, “Kill the scoundrel!” He had run like a madman. Blinded by fear. Everything before him had appeared as a haze. He had upset a fruit-seller’s cart and had fallen down but had sprung back onto his feet in a flash running through the narrow, winding lane which ended in a T-junction. But for this spot, they would have got him by now. For, at the junction, while he had taken the right turn, they had taken the left before they had realized that they had lost him.
He was beginning to tire now but fear impelled him. Gave strength to his legs. He was desperately looking out for a hiding place. There was no place to hide. Twice or thrice he had thought of stopping where he was and accosting them. To try to explain things to them. To try to convince them. That he had not desecrated the temple-idol that had been consecrated that morning. That he had in fact given a donation for that very temple and had a receipt from the Charitable Trust as proof. He knew that his running away from them thus, pointed the needle of suspicion at him. But would they listen? And what if they …? God, they had all those weapons!
Suddenly, he spotted a giant-sized cement garbage bin. He dashed to it and jumped inside. He landed heavily on a shard of glass that lacerated his right palm. He bit back the pain.  The obnoxious stench assailed his nostrils. The threat outside swallowed his physical discomfort and he sat still in a crouched position concealed in the heap of garbage. Moments later he heard the sound of footsteps that stopped nearby. He then heard their angry voices:
“Where is he?”
“Must be hiding somewhere”
“I bet he has slipped into someone’s house”
“Let’s search all the houses”“They’ll not hand him over – even if we produce arrest-warrants”
“I’ll not spare him”
He heard them cursing a dozen times more before departing. Then
There was silence.
Had they all left? Or had they asked someone to stay behind? He could not tell. But he could not afford to take a chance either. In order to make himself comfortable, he gingerly moved the things surrounding him. While doing so, he chanced upon a disposable razor. An idea flashed in his mind. He began shaving. Slowly.  Cautiously. It hurt like hell. But he had no choice. He would have to complete the job. Then wait for two; maybe three hours till darkness descended. No one would pay attention to a rag picker, he repeated under his breath.

Satish Pendharkar lives in Mumbai and writes in his leisure. His short stories have appeared in New Asian Writing, Savvy, Flash etc. Satish has also published a novella titled "The Backrush of Memory". Satish's poems have appeared in Indian Literature, Agave Magazine, Maverick, etc. He has published a poetry book titled "Nocturnal Nomad".