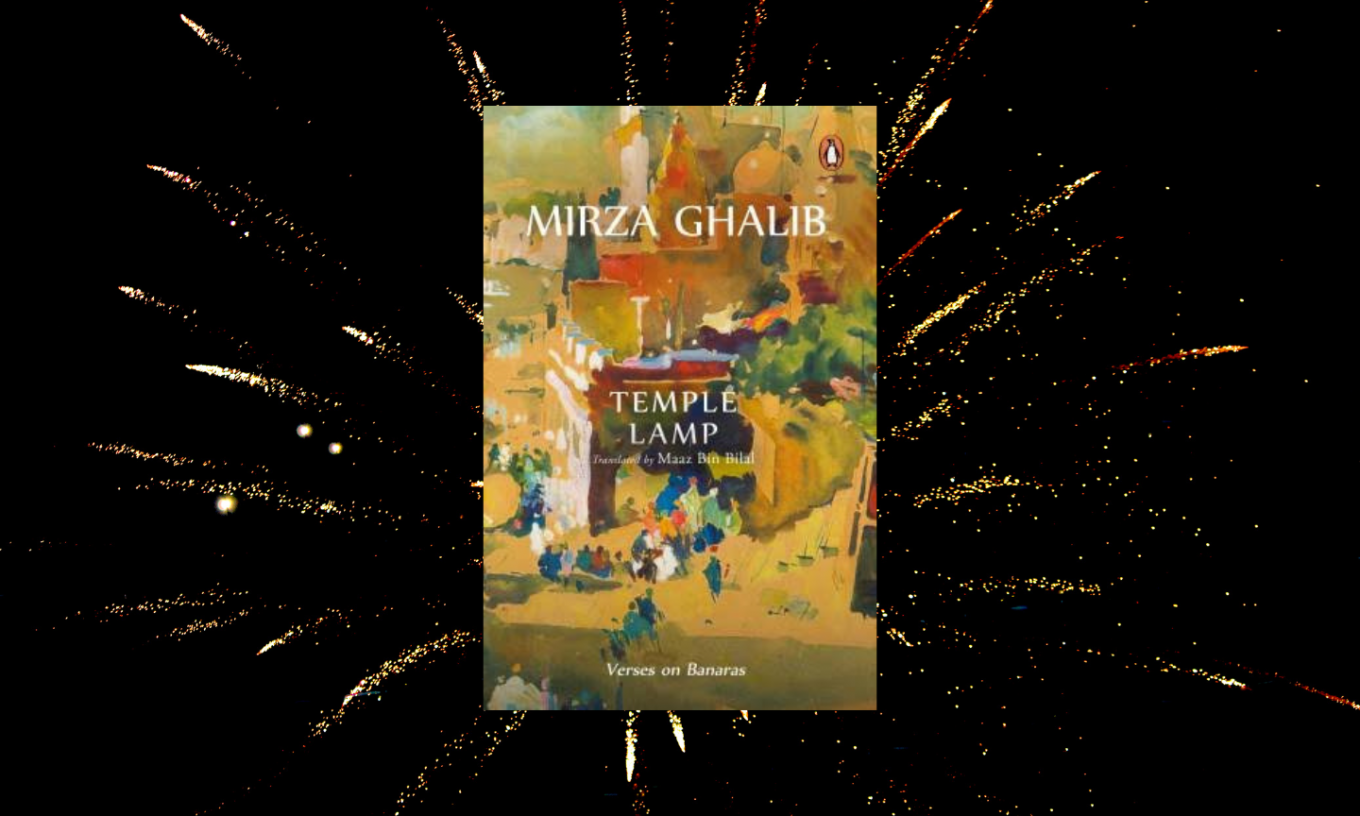 You don’t have to sing loud to hit higher notes. Ghalib knew his art so well that he could usher in a whole new perspective effortlessly. Temple Light is such a high note in his Persian works.

But it was more than a skill. It was a frame of mind that separates Ghalib from his contemporaries and makes him stand out even after more than two centuries of his death. His cosmopolitanism is as much as his possession as it is his divestment. His passionate appreciation of dissimilar entities- the otherness in life, and denial of all narrow constructs of identities, and consequent strictures, had made him what he is – a poet of poets who is still relevant.

This book is the first complete English translation of his famous, and arguably the best, masnavi (long narrative poems) Chiragh-e-Dair (Temple Lamp) directly from Persian, the pre-eminent language of governance and societal mobility for over 600 years in India before English replaced it as a language of the ruling elite. To ascertain the place of prominence Persian enjoyed in Indian society, we may recall that Tuhfatul Muwahiddin, one of the early modern texts, published in 1802 and subsequently influenced the emergence of the Brahmo Samaj and the Arya Samaj, was written in Persian by Raja Ram Mohan Roy, an early reformer in India, in order to assert that Hinduism is a monotheistic faith.

Mirza Asadullah Beg Khan, known more popularly Ghalib (1797-1869), has always been identified with and recognized for his Urdu Ghazals even though he wrote more in Persian.

In this context, Maaz Ul Bilal’s lucid and well researched translation of Temple Lamp from Persian for the first time into English is an important addition to the repository of Ghalib studies in English. Secondly, the comprehensive introduction with James Prinsep sketches of Banaras in the nineteenth century is a real treasure in the book. It offers the much-needed context to Ghalib’s restless inner world and his poetics and, consequently, to his only long poem Chiragh-e-Dair written as a homage to the ancient city of Banaras.

Ghalib’s verses, known for existential anguish, spirituality, religious skepticism and unorthodox thoughts, celebrated pluralism like never before. He was undeniably the only poet of his time, ‘the last of the classicists and the first of the modernists’, who could write such ghazals:

Faith stops me as sin draws me out
The Kaaba is behind, a cathedral in front of me

Stuck in the chasm of the Mughal decline and an early colonial India, Ghalib was in perpetual search for patronage with dignity and a multicultural and cosmopolitan home in his immediate clime. In his attempt to petition the British and renegotiate his stipend, Ghalib took a long and arduous journey from Delhi to the British capital Calcutta and back, between 1826 and 1829. He stayed in Banaras for three months on his way to Calcutta and he instantly knew that this was the ephemeral haven he was looking for.

May god keep Banaras
from the evil eye,

it is heavenly bliss,
paradise established.

In addition to his poems on Banaras, a letter to a friend bears testimony enough to understand how he felt about Banaras even much later in life:

‘Banaras is beyond words. Such cities are seldom created. I happened to be there at the height of my youth. If I were young now, I would go and live there and not return.’ (Letter to Miyandad Khan Saiyyid).

In many ways, Temple Lamp still remains a unique cultural tapestry which seeks to decodify Banaras from its mono-dimensional religious identity and weaves its physical beauty around its spirituality. The 108 verses, like a rudraksha rosary of 108 beads as per Shaivite tradition, gently touch on the natural beauty and the people of Banaras, Ghalib’s autobiographical elements and the transcendental qualities of an ancient city.

A random selection of verses creates a kaleidoscope of subtle and complex images of a city and emotions of a unique poetic mind:

Someone once compared the beauty
of Banaras to China,

and since that day its brow is wrinkled
with the bend of the Ganga.

Autumn, when it shakes its wings
in pride,

Bowing in respect to the very air
of this garden (that is Banaras),

the spring breeze wears
a janéu made of flowers.

If it not be a tilak
on the forehead of the sky,

then pray, tell, what is
that many-hued wave of twilight?

Each fleck of dirt here
in its ecstasy is a temple,

every thorn with its verdure
becomes paradise.

The (supreme) place of worship for
the conch-blowers,

surely, (Banaras) is the Kaaba
of Hindustan

The importance of this book in translation in the present socio-politico-religious context can be decidedly ascertained from the following endorsement remarks of Gulzar, a great poet of our time:

However, in his introduction (2.3 The Lamp of Banaras: Discursive location and Critical Reception), the translator seeks to broach the subject of the importance of Muslim dimensions of Banaras briefly which usually get a rare mention while discussing Banaras. But this seems a little tangential in a sense that the issue in question has its own presence and dynamics beyond the scope and essence of this unique book of verses on Banaras. However, it requires a broader and separate analysis than stray references to place it in the same basket.

This translation work is not only thoroughly researched, it is a labour of love of a passionate translator who could meticulously go over the original texts across its different editions to prepare an authoritative text and translate the text with an aim to keeping the rhythm of the original verses intact.

This book is an ode and a quiet introspection. Ghalib’s fine verses resonate with the reader and remain with him as a treasury of images of an eternal city and the emotions of the finest poet of the nineteenth century. Millions of readers in this sub-continent and elsewhere will eagerly wait for more such translations of Ghalib’s works into English from Persian to understand him in his entirety.

Sekhar Banerjee is a Pushcart Award (2021) and Best of the Net (2023) nominated poet. The Fern-gatherers’ Association (Red River, 2021) is his latest collection of poems. He has been published in Stand Magazine, Indian Literature, The Bitter Oleander, Ink Sweat and Tears, The Lake, Muse India, Kitaab, Madras Courier, The wire, Outlook and elsewhere. He is a former Secretary of Paschimbanga Bangla Akademi under the Government of West Bengal. He lives in Kolkata, India.