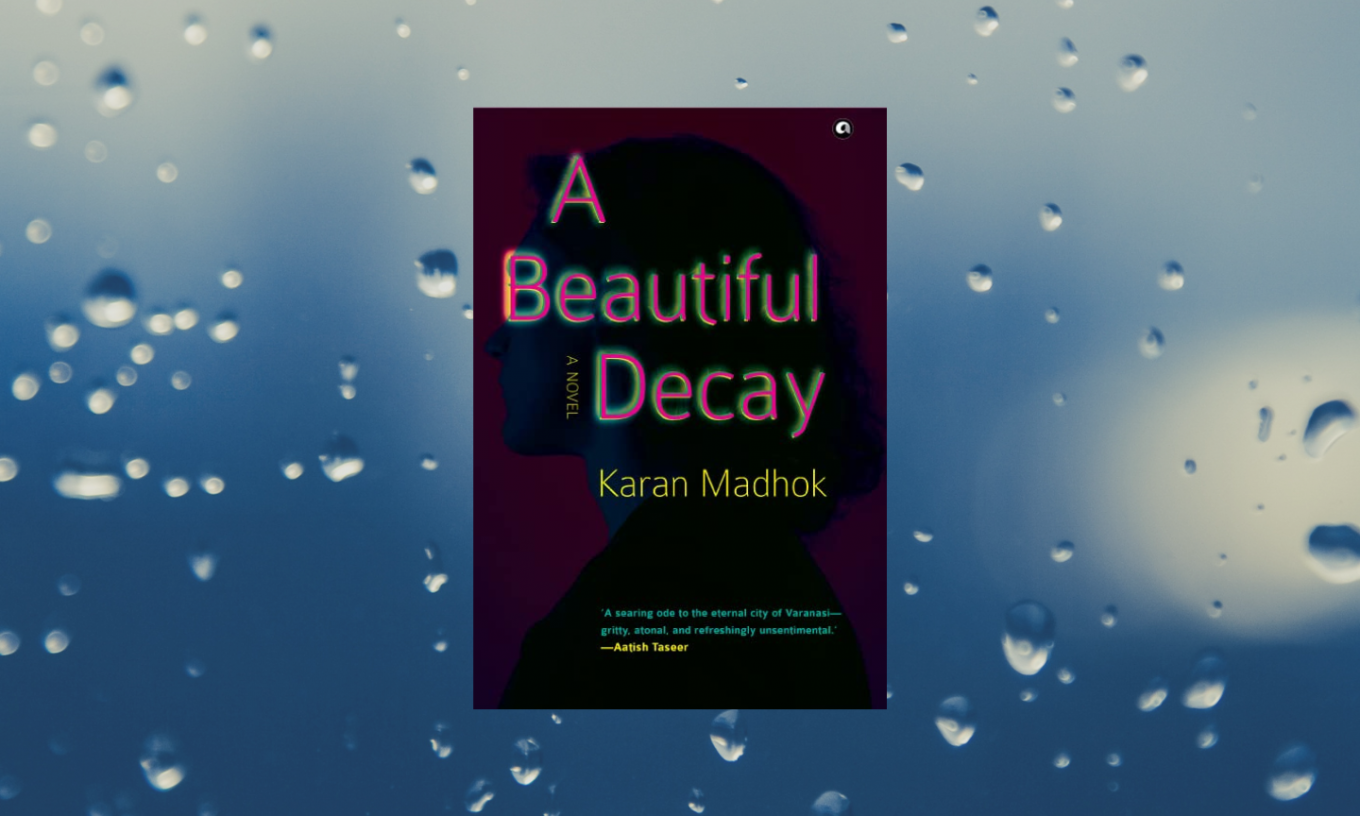 A Gut Punch from A Ghost

Vishnu – or ‘Viz,’ as he’s called lovingly by the Americans around him who can’t pronounce his name – is a young twenty-something Indian student out partying in a bar with friends in Washington, DC, when a stranger comes in, and starts shooting at the minorities around. The bullet which lodges itself into Vishnu’s body is meant for his Indian-American friend Hamid, but Viz selflessly jumps in the way of the bullet and suffers a mortal wound. To put it in the Hinglish that Vishnu constantly peppers in the book:

‘And, suno, it felt hot; I have told you that already, haven’t I? And then cold, but the cold didn’t last too long before all of those senses froze into an eternal end. Ok. Tata. Bye-bye.’

Vishnu dies, and A Beautiful Decay begins. For three hundred pages the non-corporeal Vishnu hovers around past, present, and future, delving into the lives of his family in Varanasi and his friends in Washington; the people who have impacted his life the most. Structurally the novel resembles The Lovely Bones, an American best-seller penned by Alice Sebold in which a young girl mulls over the life of her loved ones in first person after a sudden and violent death. There are several ways in which A Beautiful Decay differentiates itself from both The Lovely Bones and the general sub-genre of afterlife novels. One is primarily its perspective. Madhok and his character Vishnu have been born and brought up around Hindu ideas of life and death, and that heavily impacts Vishnu’s reference points. Vishnu’s spirit mulls a lot on the meaning of karma and dharma, jokes about his relationship to the various Hindu Gods, and shows fear towards his inevitable reincarnation before he has had the chance to make peace with his loved ones. It is rare to read contemporary novels written from a Hindu cosmology that aren’t based in traditional Indian cultures or mythologies. A Beautiful Decay would be of great enjoyment to anyone who wants to read something contemporary, international, and millennial but unflinching in its religious background.

Madhok’s characters are also uniquely drawn, and keep the reader engaged in the narrative. Whether Vishnu is joking around and smoking weed with his Indian-American friend Hamid, trying to educate his white friend Jess on how to eat papad, or cringing over the overly pretentious American lifestyle his brother Rishi has built for himself, Vishnu’s life feels very lived in. Vishnu’s imagined parents from India and their life back home are also given quite an immersive portrayal. Vishnu’s father comes off as the most perfidious character in the books, openly condescending and authoritarian. Madhok inspires a lot of pathos for Vishnu by showing how much of Vishnu’s personality is created by the lack of empathy of his father, and his struggles to create relationships comes from his very strained ones back home. Madhok also takes advantage of creating such an unlikeable character to explore the strains in Muslim-Hindu relations and satirises a lot of the communal conflicts becoming far too common in an increasingly Hindutva India. These plots reach their high point when Vishnu’s father orders the death of the Muslim workers who are protesting at his factory. The scenes in this part of the novel are fast-paced and brutal, inspiring just as much anxiety as the very real murders of Muslims in northern India happening nowadays in cold daylight.

The line of satire and realism A Beautiful Decay straddles is an oft perplexing one. Madhok’s characters tend to feel two-dimensional rather than realised, fitting easy descriptions like the Indian-American between cultures, the open-minded white American, the funny speaking black room-mate, the misogynistic North Indian patriarch. They are entertaining to read about, they are fun to hear Vishnu reflect on, but there is very little present about these characters beyond Vishnu’s immediate impression of them. Because Vishnu’s voice generally reads as earnest and Madhok has structured A Beautiful Decay as a literary novel, one wants to see more depth rather than broad strokes.  One wonders how much more piercing and emotionally confronting these side characters would be if Vishnu were not describing them only in relation to himself, but taking advantage of his time in between realms to see where else they go, how they interact with their own fathers, lovers, classmates, and neighbours.

All literary novels are made memorable from their insights on human nature, and the fascinating lines of poetry literary novelists sprinkle on the page. It is during these paragraphs which Madhok shows the depth of his obversataonal abilities. For example, after Vishnu dies Madhok describes the mourning of Vishnu’s mother in the following prose:

‘Mummy twiddled her thumbs over my Xbox controllers, laid my T-shirts on my bed, and rearranged them in a neat stack. She spent hours staring at my desktop computer screen, which had a background wallpaper image of Ranbir Kapoor and Nargis Fakhri from Rockstar. She wore all the same clothes she had woken up in…. She sat with the lights off and curtains drawn. Only a thin sliver of white sunlight cut across the room.’

The language is subtle, the language is simple, and yet the subtext of the actions between lines is devastating. With the advent of a loved one’s death nothing of the outside world changes, and yet the interior world of a human being has been completely broken, and Madhok represents this pitch-perfectly, by using a staccato sentence length and cadence, alternating between the frenetic exterior behaviour of the mother character and the complete normality of the bedroom.

In a completely different section, Vishnu remembers himself and Jess looking at cherry blossoms in Washington DC, from trees gifted to the city hundreds of years ago from Japan. Jess remarks on their beauty while Vishnu could care less, seeing them as trees and nothing more. To him, they are all the same. Jess says the cherry blossoms are unlike any other bloom ‘because they go away. Because they have an expiry date.’ To witness them at all is temporary, just like any other impressive moment of life.  Vishnu is just not getting it, so Jess berates, ‘I  can’t believe you can just bring a tree from Japan, something from a completely different environment, and plant it here. And it grows just the same?’

To which Jess responds,  “‘Not exactly the same, that’s true…But this city makes them into their own thing, doesn’t it?’”

This section is as much about cherry blossoms as it is about the United States. In reality Madhok is making a very particular comment about the nature of immigration and life being between countries. When an essence leaves their native land and becomes a resident of another, something of the environment changes them dramatically. They simply gain a look different than that which was raised natively. However, as Jess remarks,  it is the fusion of that difference in outside shape and purity of essence that make ‘American-born Japanese cherry trees’ what they are. It is exactly because they are a fusion of two different landscapes that they have a beauty nowhere else to be experienced or appreciated on this planet.

Whether it is in his observations of life between the United States and India, or whether it is in the murky unsettlements of his characters who are trying to make sense of the direction of their life, both during and after its passing, Madhok has penned an immigrant novel with a proper feeling of the 2020s. He touches on the gun violence that has become far too common in the United States, he gives a strong millennial edge to South Asian diaspora narrative, and most importantly, he has created a character who is easy to root for. A Beautiful Decay has its flaws but is a commendable effort, and no matter where it stutters, it never fails in making its reader feel captivated by Vishnu’s presence, or carried along by his struggles and hardships.

Kiran Bhat is an Indian-American author, traveller, and polyglot. He is known as the author of We of the Forsaken World…, but has published books in five different languages, and has had his writing published in journals such as The Caravan, Outlook India, The Bengaluru Review, The Kenyon Review, Prairie Schooner, The Brooklyn Rail, 3:AM Magazine, SOFTBLOW, and many other places. He has been to 150 countries, lived in 25 other places on the planet, and dabbles in twelve languages, but is currently based in Mumbai. You can follow him on Twitter at weltgeistkiran.