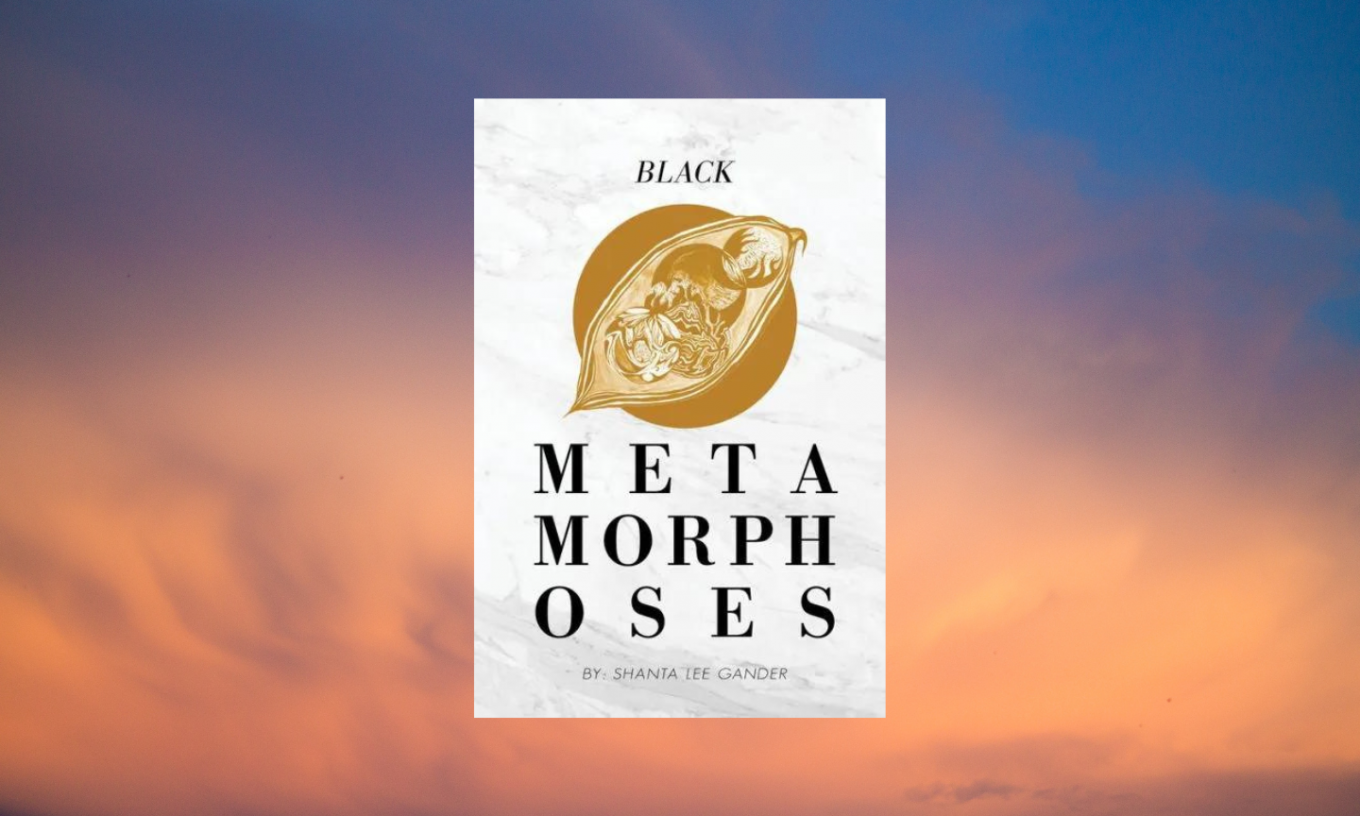 Poetry has the innate capability to do many things at once. Not only do we enter poems at the visual or sonic level, but poems have the ability to create intersections between experience, history, and feeling, while interconnecting with the reader’s own personal life at the moment a poem is read or heard. Shanta Lee Gander’s book Black Metamorphoses is a book of inescapable intersections. Drawing from Ovidian mythology, the histories of West Africa, chattel slavery in the American South, and all the way back to the depths of the Scylla, Gander uses these intersecting lines to redefine the ways in which history has viewed the treatment of Black bodies. This book raises the question: what happens when we renew canonical Western stories and pry open the theme of mythology in order to dismantle the usual way of seeing something?

Gander structures this journey in five sections but establishes a “creation” story with help from the myth of Erysichthon. Through the motif of hunger, Gander traces the conception of race, slavery, and the effects of White colonization and imperialism with her poem “Erysicthon’s Seed”:

Erysicthon pulled Hunger
out of his bowels figurin,
If I can’t soothe her, I’ll marry her
We can eat the world together

Gander’s use of language takes the reader on a journey through visceral African and Black experiences of the slave trade. Through allusions to abolitionist Olaudah Equiano, and with stanzas jumping across the page, Gander brings the reader to the forefront of White hunger:

We can dine on Black bodies for generations.

Throughout this book, Gander brilliantly pushes against historical whitewashing. Many of her allusions, references, and notes dealing with African and African American history wouldn’t even be touched in a public school. She reanimates these histories and lived experiences buried under the machine of colonization and slavery. The speaker guides us through a necessary journey exploring the intersections of history, mythology, and religion.

Gander looks at southern chattel slavery right in its face and defines the experience solely on, and for, Black bodies:

Thefted bodies be not yours, bound mouths can’t speak Yes
My grandchildren no longer tricked destroyed their footprints pon this path
Your babies knew my nipple well, it’s what made me owned

Yet this kidnapped body be not yours, I neva gave you all this
An american nightmare of your making, unbroken beginning tethered to time
Your grand babies etched my body sayin it was theirs to own

This poem, “Poisonwell Diaries: The Ghost,” uses long-lined tercets and a rapid pace to give voice to Black women raped and forced to wet nurse as slaves. These are just a few of the many atrocities and truths our country was built upon. Gander elevates pain and trauma into physical ownership of these bodies, reawakening  the honest truth of slavery in America—for example, in this simple yet powerful italicized line almost drawing itself off the page,

Some debts can’t be paid

Gander’s creativity within the book knows zero boundaries. Her journey from Gullah culture, to the Bori religion of Nigeria, through the revision of Ovid’s Metamorphoses, establishes intersectionality between body and myth. It forces readers to question God, “Where have you gotten it wrong in this world? What consequences have you wrought on stolen bodies?” Yet, the story doesn’t end there, as Gander repurposes, or I should say, rewrites these histories and myths to give strength to Black bodies, as her poem “Be this a body” does so well:

a body indigestible by Saturn’s
endless belly, be this a body

that Hunger has not the space to hold,
be this a body with the bones that vibrate

The repeated imagery of bones and the use of dropped lines demand reclamation and respect for the Black body. These are not only poems; they are spells, oral magic re-visioning suffering to promote strength. Gander’s formal versatility and episodic narrative structure progressively uncover what has been covered by the ever-present tide of White America.

Gander’s poem “Lessons from Daedalus and Icarus as told by the Igbo at Igbo’s landing” comments on the tide which covers some of the most empowering stories. Gander is referencing the mass suicide in 1803:

it never happened despite one witness
We needed no permission
You still asking where?
Most known things be marked beyond what they tell you

My lack of knowledge necessitated research on my part, but with each re-reading, I found the poem complementing Gander’s use of the term “white space” that runs throughout the veins of her book. Gander does not simply use white space on the page but also foregrounds this phrase’s connection to history, colonization, imperialism, and race. To the common White historical refrain, “When can we move on from this?” these poems intelligently respond, “You don’t have the whole story, and you never have.”

These poems are not only original in their language, organization, and form but have torn open new windows into the historical narrative. With the push to ban books, especially those from marginalized communities and perspectives, Gander’s book is coming at a necessary time. Black Metamorphoses tackles thousands of years of racial conditioning, centuries of tunnel vision with regard to viewing American slavery and African-American history. This book works to blast apart what we deem the Canon, still giving the nod to Ovid but celebrating the Black body in its moments of strength. Black Metamorphoses gives the always necessary push for White folks to continue to revisit and restructure the telling of America’s legacy, especially the institution of slavery and colonialism. Shanta Lee Gander’s use of research, form, and language brimming venom is triumphant in its originality and solidifies a new mythos in our world.

Jon Lawrence currently teaches high school English and Creative Writing in his hometown of Bethlehem, Pennsylvania. He has an MFA in Creative Writing at the Maslow Family Graduate Program in Creative Writing at Wilkes University. His poetry reviews and poetry have been published or are forthcoming from Newfound, American Writers Review, and Tofu Ink Arts Press. Chat with him on Twitter @JonLawrence1116