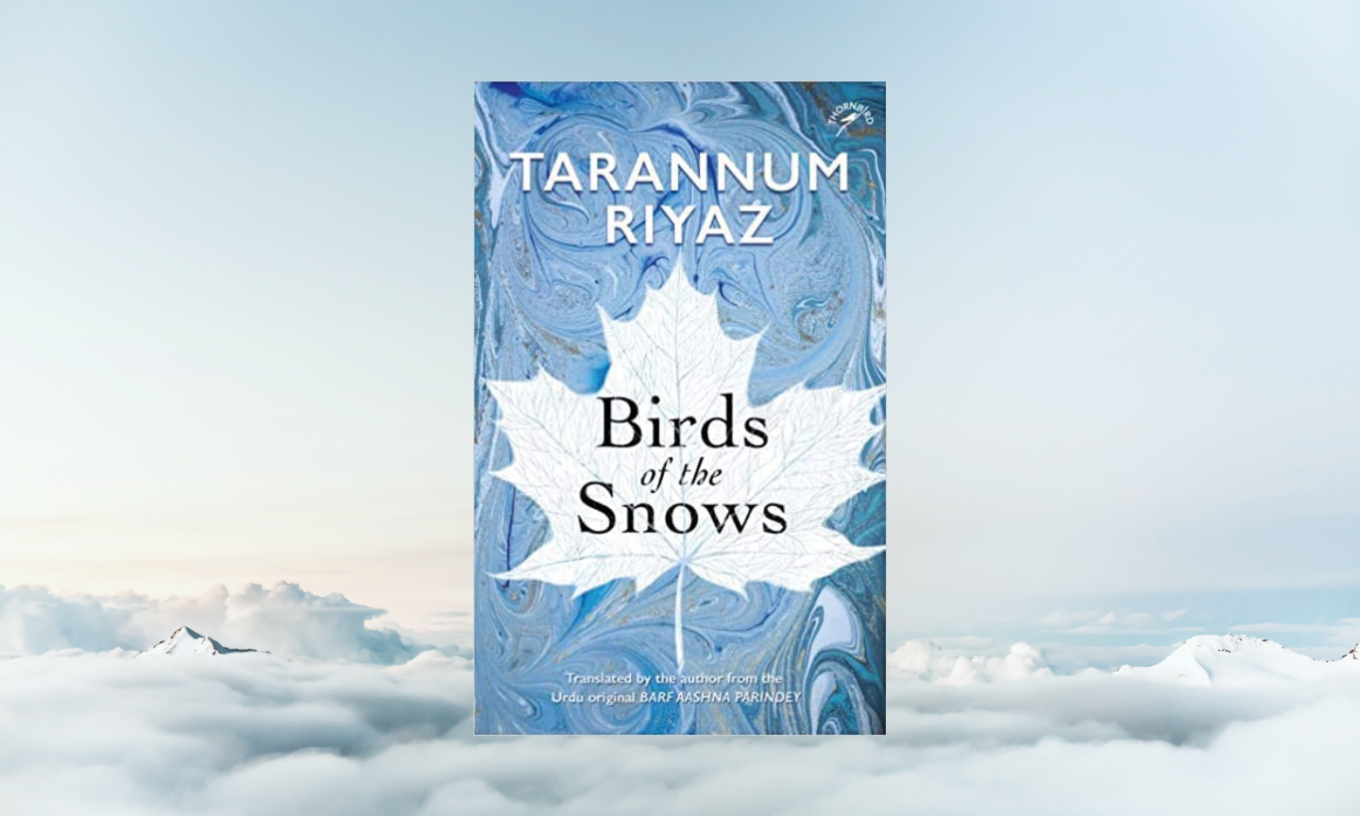 Tarannum Riyaz, poet, author, critic and translator, died of Covid-19, leaving her translated book for posthumous publication. The pandemic has become a watershed, with a ‘pre’ and a ‘post’—the pre a time that we will look back upon in the future and try to recover from our memory, from records, and archived resources. Tarannum Riyaz’s Birds of the Snows, translated from Urdu by the author, is also a looking back—an elegant, elegiac remembrance of a time, a place, as well as a way of being. Kashmir and its once-syncretic Valley culture is at the heart of this story, framed by connected stories of free-willed, strong women who handle life, relationships and loss with grace and dignity. In returning again and again to the beauty of Kashmir and all that comes naturally with it, Riyaz tunes the novel into a love song to her beloved state. Parallelly, in creating a character such as Sheba with her thoughts and her life as she leads it, Riyaz conjures a way of life, harmony and humaneness that is at stake in an increasingly contentious world.

Birds of the Snows, then, is as much about Kashmir as it is about women, their relationships with one another and the self. It begins as a family saga overlaid with the history of Kashmir, its legends and folklore, culinary traditions, arts and crafts, lifestyles, and the norms of daily living. Traditions and habits are laid out through elaborate descriptions; discussions and incidents come and go on the page but linger in the mind. The history of Sheba’s family, her father’s ideals, her mother Suraya Begum’s silent presence, her elder sister’s manipulations, the various betrayals and absences, reflect in many ways, the experiences of Kashmir itself, and create a palimpsestic narrative of place and people.

The family saga narrows down in due course to the trajectory of its youngest daughter Sheba, set against larger socio-cultural and personal landscapes caught in a perpetual flux. She is close to her family, especially her father, and grows up troubled by her sister’s bullying, before eventually leaving home for college. In college, Sheba and her friends take up caregiving for their favorite professor, Danish Sir, who is incapacitated after a stroke. Nothing much happens in her life: she chooses non-aggressive non-conformity over the expected challenges of conventional life; she chooses to take care of her ailing teacher till the end of his life, his sole caregiver after her friends leave to follow their own dreams—it is a conscious decision, and she stands by it, despite the heartbreak and loneliness it brings. Calm, dignified, and deeply sensitive to the world around her, she internalizes the pain that her compassion engenders.

It is through her eyes that we look at Kashmir, at religion, society, politics, and at women.

And… this is the weakness of women; after every bad experience she tries to begin
anew in the hope of some peaceful moments again. And man thinks she is scared and
weak, and that he is strong…

Descriptions of Kashmir’s physical and cultural beauty, as well as its complex history, weave a sense of civilizational agglomeration and syncretic whole. As the narrative advances, this sense of syncretism slowly fractures and scatters, as does the sense of happiness and fulfilment of its principal character—neither is Kashmir what it was, nor does Sheba’s life unfold as she had imagined. In fact, the writing rarely rises out of this underlying tone of loss and remembrance, intensified and cushioned by gentle, sensitive prose.

Religion is not discussed or presented often, but two brief incidents that Sheba experiences—with her teenage nephew and then with her equally young niece—highlight the strain developing in religious beliefs, especially among the younger generation.  To Sheba, with her liberal outlook, these are upheavals she could not have imagined, turning points that threaten to disrupt her family.  …everyone is a victim in the end—some victims of greed and some of their blind faith, as this great religion is being misinterpreted by these predators to suit their own benefit… She tells her nephew in a desperate effort to pull him back from the brink. But it is the change in her niece that is more terrifying for her, the newfound rigidity towards religious practice a betrayal of all that Sheba had in common with her.

Sheba did not say anything. She felt as if her chest was filled up with smoke
and fumes. Her eyes would have been filled with tears had she not controlled herself.
Her heart pounded fast for many moments. She exhaled deeply…
‘Et tu, Brute?’ she whispered…” (pg. 360).

Complex issues are offset by an underlying tenderness and empathy, like in the friendship between Sheba and Mayuri, that keeps alive the hope for peaceful co-existence.

Vivid details conjure worlds within worlds, stories overlapping stories, lives stringing other lives along, but sometimes they overwhelm the narrative, stalling the story. What they often do, though, and this is in hindsight as one mulls over the book, is inspire precisely that which we have forgotten—a relaxed pace of life, a mindfulness to the present moment that could help center our being.

Autumn brings rouge from the skies for my beautiful Valley; the green
of the chinars turns to crimson and orange, which looks like some yet unseen
part of heaven against the background of the blue sky. Snowbirds with
soft feathers of vibrant colours visit to bless it with the pride and pleasure
of being their host. When the snows accompanying the bluish clouds come
to its many valleys, hills and waters, its rivers and springs dance and its
lakes sparkle like quicksilver (pg. 260).

Birds of the Snows evokes a life, recovering it for those who have forgotten what such a life is like. This is translation’s aim too—to recover, to recall. If the translation is effective, it will do so unsparingly even as it retains the soul of the original. Reading this English translation of Barf Aashna Parindey, one can hear the resonances of the Urdu in many of the passages, especially in the use of local words and terms, in Sheba’s thoughts and memories of her Valley, in the poetry that she remembers and recites to herself or to Mayuri.

However, the translation is dogged by a few issues that could have easily been avoided at the editorial table. The explanation of each term, for example, not in a glossary but within the text, disturbs the reading. Often, the translation turns verbatim, abruptly splintering the rhythm and the essence of the sentences. A smattering of such instances may not call for attention, but more than this, and it calls to mind the closer editorial engagement that could have prevented the translation from sliding into awkwardly structured passages, especially in a book that the writer did not live to read through again.

The laughter of a child like the tinkling of paazeb (an anklet) was heard
on the phone. Hearing this, Sheba was all love (pg. 139).

The wind blew again and entered through the door which she had left
open, waving her gown-like nightdress swiftly (pg. 287).

Sheba had learned many a bandish while studying in the university during
her vacations at Gandharav Vidyalay, where she had gone with Mayuri (pg. 435).

The awkwardness of such sentences and passages aside, the book stays true to its two core concerns—Kashmir and women. Kashmir waits, to return to what it was or to put the past behind and carve a new future, one will never know. The women are dynamic, courageous, whether it is Sheba who turns away, again and again, from all that is mean and petty, or Mayuri who has the honesty and humility to own up to her mistakes and return to the life she had rejected, or Suraya Begum who manages with poise and firmness the complications of her large family as well as the loneliness of her widowhood. The narrative anchors the various people and the places they inhabit, geographically and emotionally, with a keen sense of history that provides both context and perspective to their journeys.