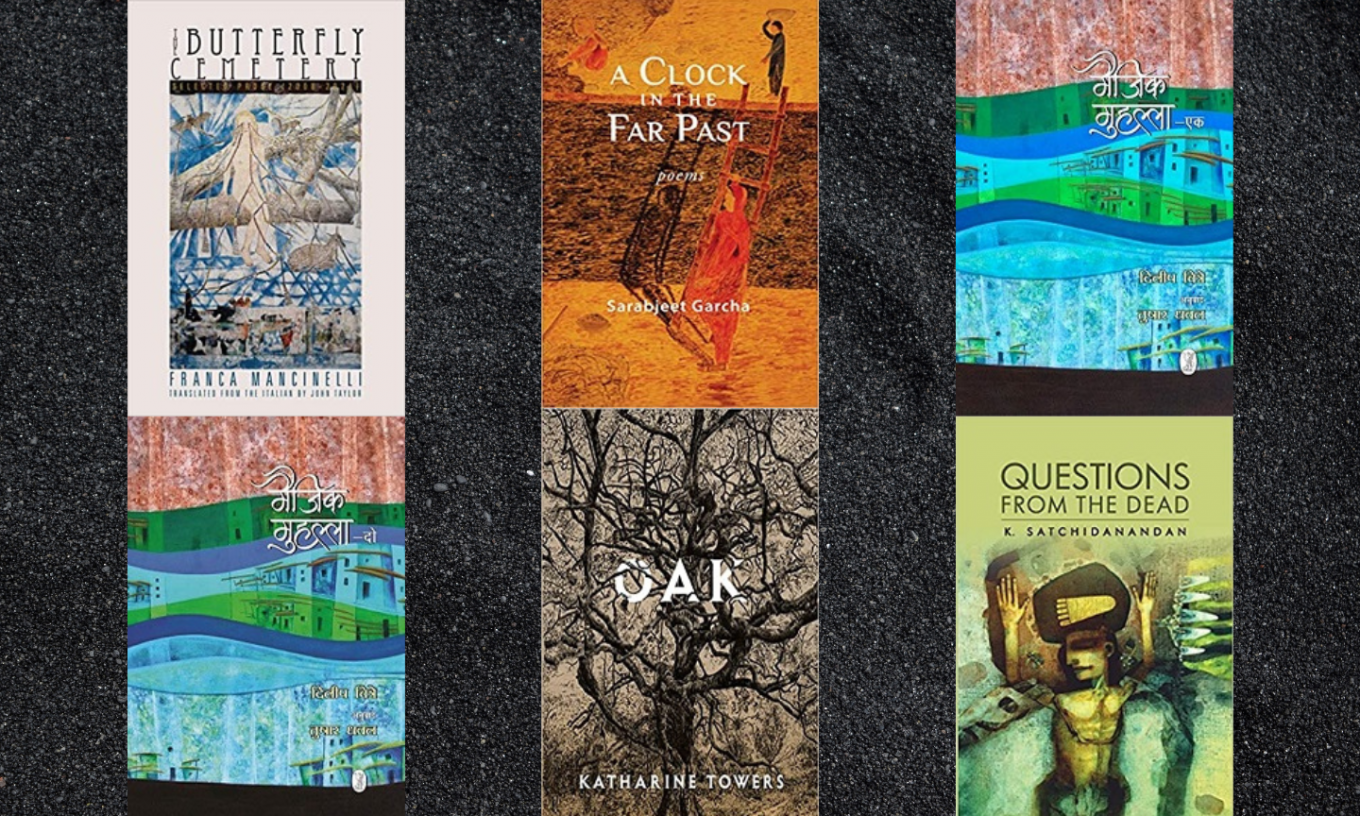 The Butterfly Cemetery by Franca Mancinelli; translated into English from Italian by John Taylor

The fictitious line dividing different stages of life blurs as a person matures. In this collection of prose poems, Franca Mancinelli documents many phases of her life as she searches for the boundaries delineating them. This book draws your attention to an idea that the poet describes as, “At times, you can pick things out floating along these waves that seem familiar, lost.” The book is a fine collection of narrative poems that are mostly autobiographical. Translated by John Taylor from Italian to English, the book presents several of Franca’s poems which have not yet appeared in any publication in their original language.

A Clock in the Far Past by Sarabjeet Garcha,

In this book, Sarabjeet Garcha uses a strong lyrical approach to navigate through his past, his childhood, and a desire to be a part of nature. Rich in spirituality, he sensitively reveals his inner self through a narrative that is neither stiff nor unstructured in tone. The sands of his hourglass keep flowing as one goes on a journey from one poem to another in this book. Similar to a spiritual practice that can bring immense clarity to day-to-day observations of life, the poems create an inquiry that deepens and enhances one’s intellect.

Magic Muhalla Part 1 and 2 by Dilip Chitre; translated into Hindi from Marathi by Tushar Dhawal Singh,

Dilip Chitre, a Marathi poet, was one of those revolutionary poets who, with originality, bravery, inventiveness, and sheer intensity, revolutionized the geography of contemporary Indian poetry. Poet Tushar Dhawal Singh undertook the colossal task of translating his works into Hindi in seven chapters spread across two volumes titled, “Magic Muhalla 1 and 2,” which include a number of Dilip Chitre’s poems and prose that range from lyrical to autobiographical to those that depict the suffering experienced on both sides of a generational difference. The name of the book is borrowed from a poetry series written by Dilip Chitre titled “Magic Muhalla”, which is essentially a poem of love and conflict. The book is an autobiography of the translator’s coexistence with the poet.

In her most recent work, “Oak,” Katharine Towers has written just one poem, which a reader can easily navigate, like crossing a rural pond of a reasonable size. The book is an imaginative poem about nature that continues to tell the tale of oak from its acorn to its afterlife. Few punctuation marks are used in the book’s poetry, and many of the extracts can be read on their own as individual poems. The book is one of the most uncommon of its kind in the modern poetry world because of its magical sensitivity and consciousness. The hypothesis of “pathetic fallacy” has made a very pleasant reappearance in this single poem book.

Questions From The Dead by K. Satchidanandan

The collection of K. Satchidanandan’s new poems highlights his amazing intimacy with language, his unwavering determination to preserve his predecessors’ legacy, and a voice that regularly exposes the institutional hypocrisy of people in positions of authority. The book displays the blatant stubbornness of a potent literary voice that won’t let go of his history, whether it be personal or political. The poems are at once historical and contemporary. The effect of his poems lingers long after one has finished reading this collection.

Sonnet Mondal is an Indian poet, editor, and author of An Afternoon in my Mind (Copper Coin, 2022), Karmic Chanting (Copper Coin, 2018), and Ink & Line (Dhauli Books, 2018). Founder director of Chair Poetry Evenings - Kolkata's International Poetry Festival, Mondal serves as the managing editor of Verseville. Editor of the Indian section of Lyrikline, Haus Fur Poesie, Berlin, he has been a guest editor of Words Without Borders, Poetry at Sangam and Radar Magazine.