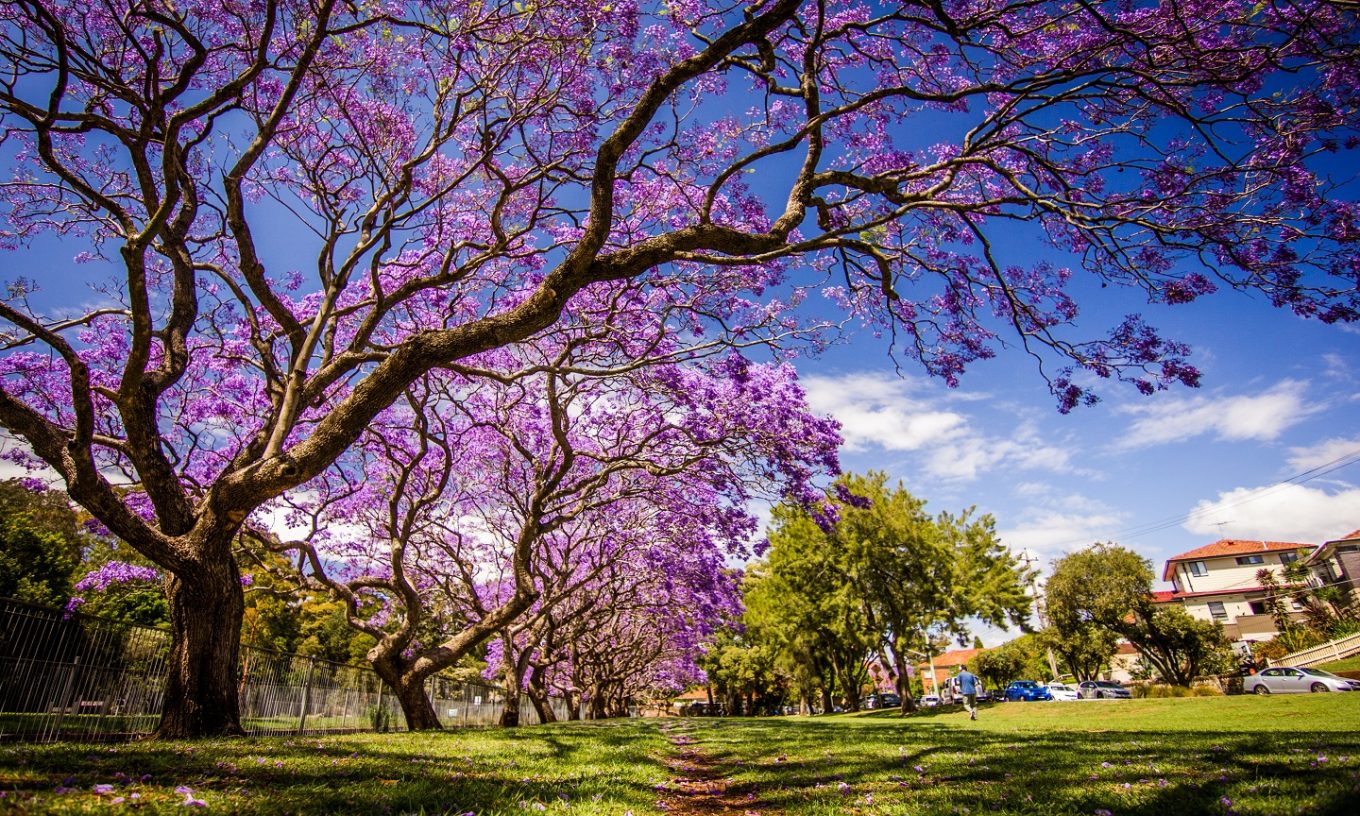 My birthday is in November, the month in which jacarandas are in flower across my southern hemisphere city. Theirs is the purple flower that you see in bright glimpses amongst other trees, theirs the flowers that lie in joyful scatters across the grass or pathways. When I think of my many birthdays, I recall the jacaranda’s vivid flowers. And as of last week, I will also think of my ex-husband walking past me, ignoring me, just as a delivery truck drove forwards into a jacaranda tree, then reversed, then hit it again. I will remember the crunching of the tree’s timber, the screech of smaller branches on the truck’s metal flank, the shaking shower of mauve.  He has been my ex-husband for ten years now. We were married for over twenty years; more than half my life when we finally parted ways. That’s so many years to take account of.  All these days later, I realised that the discomfort I was feeling wasn’t from my trying to compose an email to a client, or the brusque text from my daughter. It came from feeling that I needed to take account of those years of our marriage and silence, revive them from their dehydrated dormant nest and shake them out, see if there was any color left there still.

My ex-husband will not speak to me. We haven’t spoken for years even though we live only a couple of suburbs away from each other and have three children. Lately I have been seeing him getting lunch at the dinky little mall near my house. Maybe he’s working nearby now. He must see me too, but pretends he hasn’t. Before he stopped talking to me, he said that I’d ruined his life. That’s a claim large enough to have the flavor of a curse.

Each time I’ve seen him at the mall I have left him alone. I’m not mischievous. I would like to say hello, but not if it would anger him. He has looked almost haggard for a long time now, with his grey three-day beard. He looks weary. But he still wears his clothes well and in the right light, a kind light, is still a head-turner. When we had money, by which I mean when we had credit to service our debts, I bought him smart clothes that sat on him perfectly.

It was Monday, around midday, that I saw him getting his lunch in the mall’s food court, which has just six outlets. He was at the place which sells salad wraps and fresh juices. I walked past, eyes sliding over him while he resolutely stared at the counter display of sandwiches. I felt sad that we couldn’t stop and chat. I went to the flower shop near the ramp, and bought yellow tulips for my mother. I would be visiting her that afternoon, and though I hadn’t planned to get the flowers, my mood had sunk on seeing my ex-husband. The flowers became something that I wanted to do — something kind that would bring a smile to my mother’s face. If not his, then hers.

But then, there he was again, outside at the mall entry, near where the jacarandas line the footpath down the street. He was getting money out of the ATM just as the red and white truck drove into the nearest of the trees. Blind clumsy driving. There was no reason to drive into it. The tree was about fifteen years old and in the prime of its life. I know this because I’ve lived in the suburb all that time. Maybe my ex-husband remembered that jacarandas flower in the month of my birthday, even that my birthday had just passed. In any case he paid no attention, just took his money and kept walking. Meanwhile, good citizen that I try to be, I was waving uselessly and furiously at the driver. But he hit the tree again, maybe three times.

Sometime this week, the jacaranda tree was removed by the Council. It was that badly damaged. All that is left now is a low stump and a few purple petals still scattered on the footpath. They last and last.

When we were in the throes of separation, my ex-husband said a couple of times, kindly but also with the whiff of accusation: ‘Don’t you remember how we loved each other?’ Surely, I could have conjured up those feelings again through the drying concrete of my cool anger. Surely, if I could have felt the love that we’d once had for each other, and not just recognized those gone-feelings as mere probable fact, we would still have been together. But I was worn down. I didn’t, back then, look for those feelings hard enough.

Our first weekend as lovers had begun when we left Sydney on a Friday night in January, just took off around ten pm, driving through the night to the countryside, for the annual Tamworth Country and Western Music Festival. We drank beer, listened to crooners and buskers and bands inside the halls and out on the streets, wandered the streets. He wore his moleskins and no shirt in the fierce summer heat.

On our bed in the Australia Hotel twenty miles out of Tamworth, we lay back in a tangle of limbs. I felt as if I could be close to him like that for a very long time. I adored his arms and especially his shoulders, the long strong muscles, and his big, long fingered hands, all his rhythms. His palms were rough and calloused. I liked that. Later, I would massage creams into his hands when his skin was dry from plaster or bricks. His back and chest were beautiful, the skin of his neck incredibly soft. He was so young still that he couldn’t have grown the beard then, that he needs now to shave. His sweat smelt so good.

By the fourth day I knew that I was crazy for him but that I was also tempted to walk away. As we drove home along the highway with the bright sky above us and the grey-green trees from the state forest whipping by, I squandered that clarity.  He put in a strong-scented tape, Elvis or Johnny Cash or Neil Young. We’d got so excited and emotional about Johnny that weekend. With his strong hands on the wheel of the car, my lover who would become my ex-husband said something fierce and heartfelt about loving me with a sweet, low feeling in his voice.

It takes a greater maturity than I had to know how to be loved more than you want to be, or can love a person back. Another way to put it, is that I was a coward. I didn’t have the guts to say, ‘You know what, you’re not quite right for me. I don’t want to be loved like that. We had a beautiful weekend. Goodbye, my love.’ But we were already deep in the song that had to be sung, and we couldn’t end it until it was truly worn down, and done.

I did love him boundlessly years later when we had our first child. It was then that I truly fell in love with him. He held her, our newborn, the both of them newly born. He gathered her in his large hands with such tenderness and confidence that I felt that there was nothing I needed to do beyond watching him father her. Many times, he held her so, as she grew out of his hands and into his arms and onto his lap and beyond it.

His eyes are very large and long lashed. It’s not unusual for men to have thicker, longer eyelashes than women. His brown eyes were so big that I could easily see myself reflected in them. This being seen was an optical lie, however, because it was often accompanied by my sense that he didn’t really see me at all, the me who wanted to be known. But then again, I didn’t know myself. There was our love and there were these gaps in understanding and my silences, and I was young and beautiful and he certainly saw that.

He danced badly and without embarrassment. He ate with good manners. He could play any sport well, but smoked cigarettes. When our son and I played soccer against him, the only way we could win was to exhaust him. We counted on outrunning him. He could barely get through a page of a book before falling asleep. He developed sleep apnea and I’d wake in the night to the sound of his choking, and have to gently shake him till he breathed again. He made jokes at other people’s expense. He wanted to be rich. It bothered him that we weren’t. He was clean in the bathroom. He constantly lied to me, as it turned out. I lied too, intermittently. I wish I hadn’t. I feel that strongly. I wish I had been a braver woman who saw unflinchingly to the crux of the matter, and was ready to say what I meant. I loved him enough, and we had our beautiful children, but I should have walked long before then, like the woman in Johnny’s song who says, ‘Yes, I’m in need of something… I used to love you a lot.’

The next time I see him I would like to reach across the pain between us, and say with the authority of someone who has known him well, ‘Actually I do remember, I do remember that I did love you a lot once,’ and see his sad face light up a little.

Photo by Tim Cooper on Unsplash

Jane Messer is a published Australian author, with a number of novels, short stories, radio plays and academic works in print and broadcast.