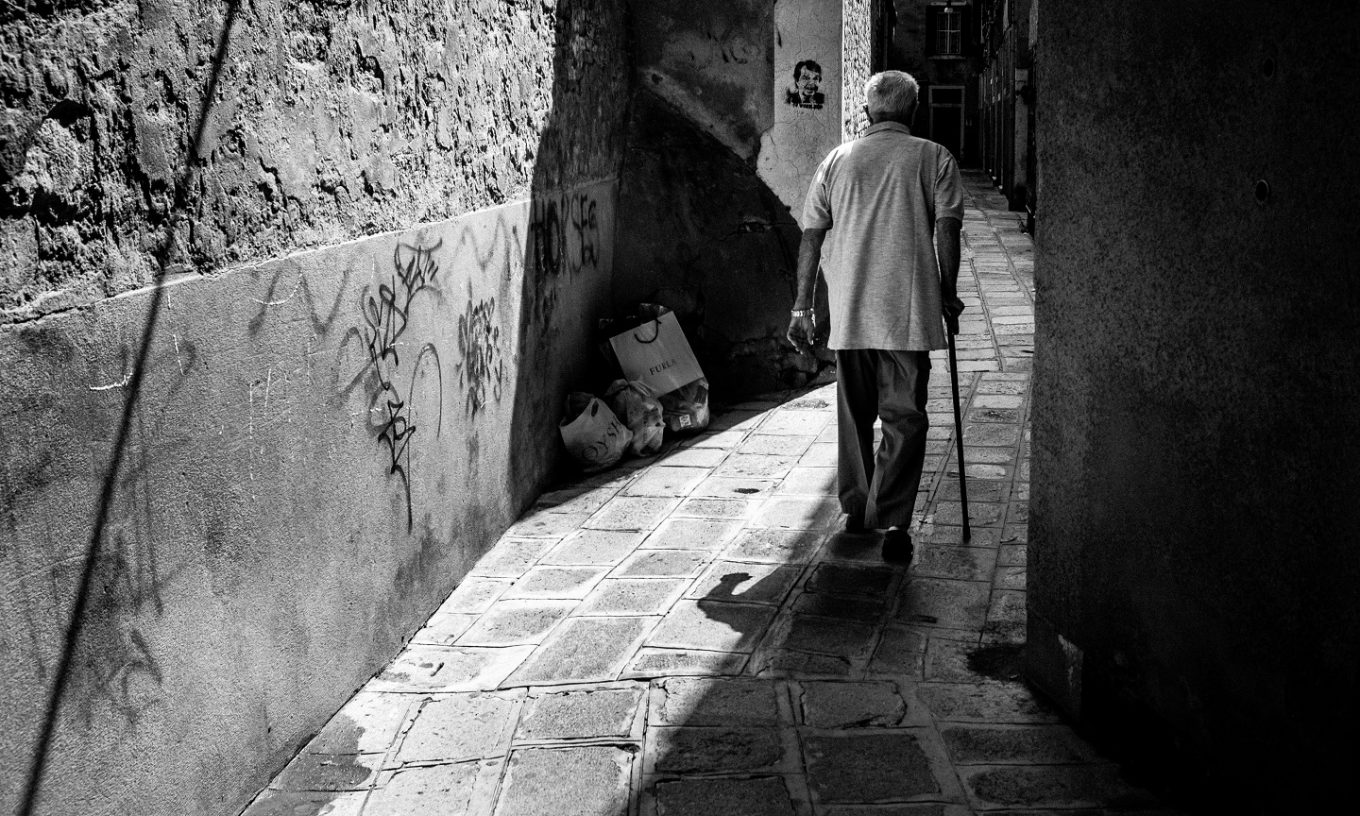 In mottled cotton, shambling toe-heel, toe-heel,
Bass-ackwards
With Zen concentration and breathing down the neck
Of the square’s
Path, sinking under the shards of bruised bone
Tea- stained
Petals: coral and salmon, mauve and plum, auberge
Fleshy pulp,
And crushed beneath him were the skins and juices of what
Had-been-so-lovely.

Let us begin at the beginning with a man:
Mr. Chan,
In red terry-cloth armbands, perambulating backward
Postures
Discrete as stills of a film. Thus, in Rittenhouse every day,
Cells
Rewind, muscles, the rectus femoris–say–habitually relaxed,
Tense.
They say: backward motion unravels neuro-pathways readymade
Forged
After punching out and before punching in, gliding daily
To and fro
On the earth, from kiosk to square and back again.

How shall we unlearn forward momentum?
Ligaments
Groan in protest, tripping backward,
Like matter,
Strolling towards a shadow of a black hole. Why,
Michael Jackson
Would certainly have moon-walked like this at ninety.
“Why?”
I cannot answer grief’s complaint. In Malaysian- made
Sweat
Pants he practices the solo slo-mo shuffle.  Every day
Backward
I think, as I watch, that perhaps walking backwards is akin
to Zohar–

Reserved for initiates of mystical traditions? Or do the aged
Reverse-course
In order to escape the gravitational pull of
‘life’s opposite?’
(As the Hassidim say.) Just so, Mr. Chan arrives at the
End
Of the square, weaving between joggers,
Grief
Has no map, no terminus, no compass, only
History
Of a journey unfolding like “Shesshu’s Long Scroll.’
Backward.

Photo by Frank Busch on Unsplash

Chava Evans is a rabbi and chaplain in the Washington DC area. She has three children.