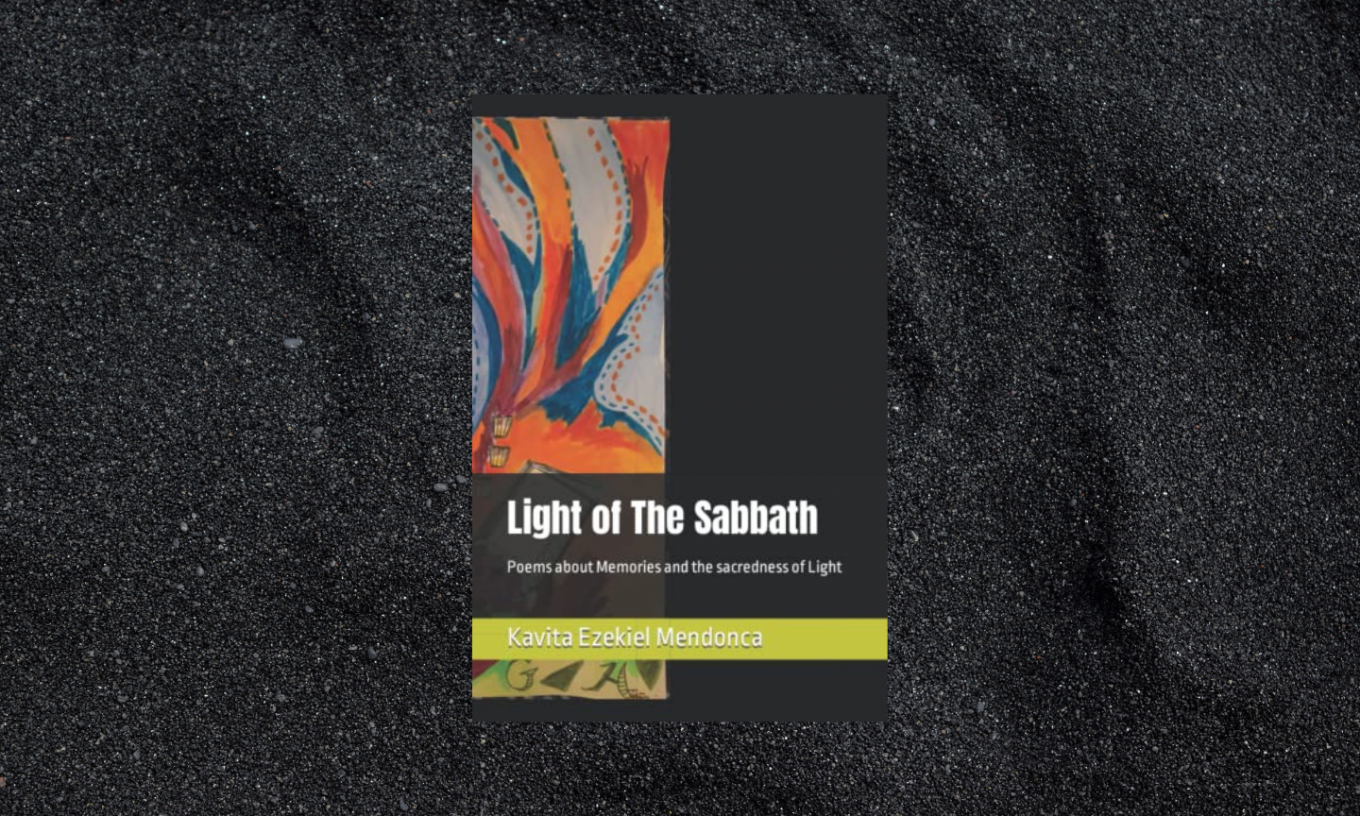 Kavita Ezekiel Mendonca begins her chapbook Light of the Sabbath with a quote from the Bible’s Book of Genesis 1:3: “And God said, ‘Let there be light, and there was light.’” This book is both a reflection and appreciation of the various forms of illumination that radiate our being, becoming part of our sacred consciousness, apart from the effect of light of natural elements like the sun and the moon.

Born in the Bene-Israeli Jewish community dating back over two thousand years whose origins are still not concretely established (the one most popular theory being that they fled from Galilee and the rule of the Greek overlord Antiochus Epiphanes in 175 B.C.E.), most poems reflect Mendonca’s Indian-Jewish heritage and celebrate memories of growing up with the traditions of the culture, faith and personalities of her parents, grandparents and extended family. At the graduate and post-graduate levels, she has studied English and French, American and English literature and has a Master’s degree in Education from Oxford Brookes University, England. She has taught English, French and Spanish in various colleges and schools in India and overseas. This chapbook is a collection of poems composed between 2016-2021 while living in Canada and published in various reputed international literary journals. Mendonca lives in Calgary.

In her incisive and illuminating foreword to the book, Saranya Subramanian provides the key focus of this collection: ‘Kavita is fighting oblivion through poetry. She is fighting those who forget, those who are forgotten, those deemed forgettable, and all the ephemeral lives that get lost in the dungeons of collective human memory through “Light of the Sabbath,” Kavita, quite literally, sheds light on memories in an almost tenacious fashion, protecting them from the cruelty of human forgetfulness.’ Unsurprisingly, the narrator is many things, writes Subramanian: ‘a child narrating, an adult recounting, a passer-by noticing, a devotee praying.’ The reader herself experiences a change in herself through a visit to this museum of memories, participating in the poet’s moments of revelation.

Since these memories are lived experiences, an interweaving of remembrances informs the collection.  Vivid emotions for the family are often interwoven with emotions towards religion and history, rich in their range from devotion to anger. If one takes the poem “Alibaug” where Mendonca’s mother’s aunts lived across the sea from Bombay, we see the strands interwoven at various points in the poem: as a child, she crosses the sea to visit her aunt’s family in a ferry, even defiant of the Indian monsoons. The thread moves to the ocean lapping at the gates of the cottage; the ocean meant there was fish to catch and cook before nightfall, for lantern light was the only electricity then. Midway, the thread loops back to the defiant rains when, holding umbrellas, they willed the rocking boat to land them safely ashore. The child’s strong sense of religion and of the miraculous directly reminds her that Jesus could walk on water, that He could still the storm. The child-adult voice says she cannot swim yet wishes to walk the earth with grace. The last lines are the most touching: ‘I don’t know where/the fish sleep/In the folds of the waves/Or in the folds of my memory.’

This interweaving takes place not only within a poem but also with other poems. If one continues with the theme of the sea, we see that Mendonca’s journey on a ferry to Alibaug connects with the journey of her ancestors. The poem “Shipwreck” narrates the legend of how the Bene-Israeli Indian Jewish community came to India, ship-wrecked by a rock, making the poem a piece of urgent oral history. ‘I am from the same seed/Descendant of those ship-wrecked wanderers/God’s Rock recurs in dreams/My ship’ breaks ever so often/On life’s rocks, but I survive/Like my ancestors.’

A single poem can also reveal a range of emotions. In the poem, “Istill sing the Shema,” it is her faithful ancestors who first carry the burden of history, then comes her own anger at this burden that she is unafraid to express in its full intensity. The poem starts with the bedrock of her faith: reciting the Shema (a centerpiece of the morning and evening Jewish prayer service) before a meal with her larger family. Midway comes faith again in the recitation of the Shema during the Garhwal earthquake of 1991, when ‘the bed rocked like a boat/to the screams of children/Sliding down the halls of/a girls’ dormitory’ for ‘sometimes/When the earth breaks, Nature/is stronger than faith.’ But it is the holocaust that makes her “an enraged bull.” She visualizes scenes from history: Jews made to leave their homes with the muzzle of guns thrust into their guts, sleeping children piled randomly into trucks, their anguished cries ringing in the dark. It is here that she sings the Shema in a broken voice. And what is the Shema? Its first verse encapsulates the monotheistic essence of Judaism: ‘Hear, O Israel: the Lord is our God, the Lord is one.’

Mendoca’s style is essentially conversational and more in the form of poetic prose, though strewn with half-rhymes and alliteration. Just as it reveals the characters of her parents and grandparents, aunts and uncles – ‘the village that raised me’ – we get vignettes of deep shared love, despite the thrift and paucity in many of her relatives lives. In the poem “China Grass Halwa,” humor is revealed in the lines: ‘My aunt’s home in the/city of my birth/was neither square/nor had footage.’ The balcony could fit one and a half people so long as one could see the synagogue! In the title poem, “Light of the Sabbath,”the child-poet’s hair is rubbed with coconut oil straight after the Sabbath prayers, during which she observes her aunt’s ‘Godly body swaying slightly/Lips moving in whispering/prayerful devotion.’ “The Ballad of Little Ma”is a graphic loving description of her Marathi-speaking grandmother ‘with strength of heart and soul.’ What the poet recalls nostalgically are the simple things: her grandmother’s sneezes after the use of snuff: ‘No sneeze sounds quite like hers now’; her mispronunciations of English words; her silent touch on the shoulder to indicate love; her missing photograph missed over four decades. This directness, simplicity and authenticity warms the reader’s heart, eliciting willing participation in the narrator’s journey through memory.

In this collection, there are nature poems as well, reflective of light, shadow and color. Notable among these is the Pushcart-nominated poem, “How to Light up a Poem.” Here, nature is petitioned in all her aspects for composing a poem: the moon, the sun, the trees, a stream, squirrels, birds, butterflies, bees, dragonflies, flowers, cherries, apples, weeds and ‘your own inner light.’Withreference to birds, there is a line where birds ‘drop their feathers in images of noise and silence.’Though Mendonca has a distinct identity of her own as a poet characterized by both simplicity and directness, these lines remind us of her celebrated father Nissim Ezekiel’s famous poem, “Poet, Lover, Birdwatcher” with its lines: ‘To watch the rarer birds, you have to go/Along deserted lanes and where the rivers flow/In silence near the source, or by a shore/Remote and thorny like the heart’s dark floor.’ As a poet, Nissim Ezekiel single-handedly revolutionized the scene of Indian English poetry, and Mendonca does everything to preserve her father’s memory and legacy for this and future generations.

Mendonca’s poetry also reminds me of the poetry of another Bene-Israeli, Zilka Joseph, whose life lived both in India and the US reflects the same secular and traditional influences with a similar interweaving of memory, the spiritual, Jewish and Biblical themes. In her chapbook, Sparrows and Dust, which won the Best Indie Book Award, I excerpt from Joseph’s poem, “Between Worlds”: ‘and in worlds within worlds, /we live. Your fingers ruffle my curly hair. Always/wild. It is longer, more/jagged. And has grey/in it now. Like ashes. Junglee, you say, and mum/runs her fingers/through its snarly/thickness as she tries to braid it. Which/ancestor blessed me with these gifts? / How could/these bonds/break, this/wildness ever/leave us?’

With many Biblical and Jewish references in Mendonca’s poetry – the Rock, Noah’s Ark, the dove of peace, Lot’s wife and the pillar of salt, the Challah bread, the parting of the Red Sea, recitation of the Shema, Mazel Tov – anything and everything can be turned into a prayer, into an archive to be preserved, into a symbol of peace in the midst of suffering.

Perhaps it is befitting to end with Mendonca’s last poem in this chapbook, which speaks for itself in the way she views light in life and in daily living. Titled “A Blessing,” the poem encourages a reader to allow the light to enter over the left shoulder. It ends with her classic simplicity: ‘Light over the right/ Is also good and completes/The picture, Then darkness will find no place, The light will block it.’

Neera Kashyap has had a career in social & health communications. She has authored a book for young adults, Daring to Dream (Rupa & Co.) and contributed to 5 prize-winning anthologies for children. As a writer of short fiction, poetry, book reviews and essays, her work has appeared in several international literary journals and poetry anthologies. Her book reviews have appeared in Kitaab, The Bangalore Review and The Quiver Review. She lives in Delhi.