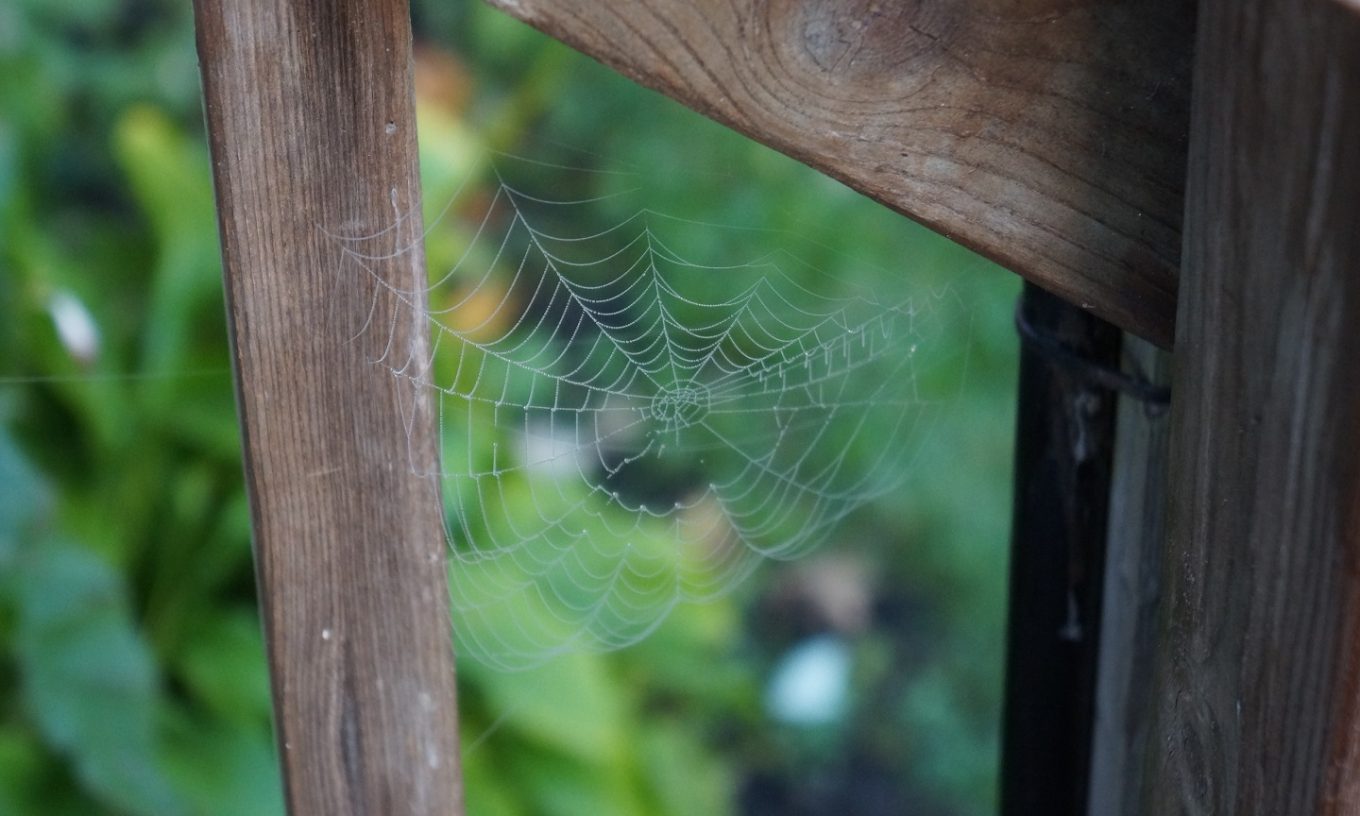 Today, at two months shy of sixteen, Thenmozhi finally felt like a woman. She assessed herself in the tall old mirror; black and red oxidisation had tainted the lower portion, giving her reflection the appearance of being swallowed by flames. It used to belong to her grandmother. Old maroon bottus* were stuck on the side, where the metal hooks were rusty and the mirror was losing its clarity. Like the edge of a river. Or a puddle. She tried to imagine her Paati sitting here, powdering her round pitted face so that it appeared fresh and fluffy like the perfect poori*.

Thenmozhi had always admired the way she had woken up each morning and dressed herself impeccably to go only as far as the kitchen or at most, the front gate. Her diamond earrings would catch the light as she dusted the verandah, her moisturized hands would glisten as she sifted rice and her lips would shimmer with the generous application of Vaseline as she narrated fascinating stories of her life and childhood. Her saris were always brilliantly coloured with patterns on the ends – peacocks, mangoes and sometimes just geometric shapes in sparkling threads of gold. She had a rebellious attitude herself but had dedicated her life to making sure everyone around her stayed in line. What would she say about Thenmozhi today, she wondered; of the person that she was growing up to be? She had been named by her grandmother – honey: rich, pure, sweet, immortal. Was she really any of those things?

Thenmozhi appraised herself: there was a fullness in her chest, a bit of fluff over her upper lip, the discomfort of a blind pimple and just as she gazed upon her exposed neck, her mother walked through the door. An icy tremor shot through Thenmozhi’s body as their eyes met in the mirror. “What is that, Theyn?” her mother shrieked, her face coloured with concern. Her mother’s fiercely oiled braid lay coiled over her shoulder, like a pet snake. Thenmozhi could smell the pungent blend of coconut oil and sandalwood powder – the classic scent of Amma.

“Don’t know, Amma,” she said, grimacing. Why hadn’t she closed the door, she thought to herself irritably.

“Nope,” she responded, as her mother breathed down her neck, trying to get a better look.

“Let’s go to the doctor. It looks really terrible.”

She called for her husband in a shrill helpless voice that she reserved just for him.

“Yennangaaaa.” The house reverberated but there was no response.

“I can’t,” Thenmozhi replied. “I have a test today.” She saw the papers on her school desk flutter conspiratorially.

“How can you go like this?” her mother asked indignantly. She grabbed ahold of the edge of her sari and tucked it resolutely into the skirt portion.

“We are going to the doctor first and that is that.”

Thenmozhi sighed in defeat. Their regular trips to the hospital were a family joke. She sprinkled turmeric in everything, added too much garlic to the food, and hung far too much lemon and chilli at every entrance. She kept a close watch on the house help and if she spotted so much as a stray hair, they would be instructed to redo the work. If the disinfection of homes and washing of hands were a national sport, Amma would win every year. They left for the hospital immediately.

During the fifteen-minute auto ride, Amma nervously cracked her knuckles and muttered to Thenmozhi. “I hope it’s not some wretched skin disease – like eczema or psoriasis. My aunt woke up on her thirtieth birthday to a massive red scaly patch, can you imagine!”

Thenmozhi said nothing, just responded with a nod or shook her head, as was appropriate.

As they approached the hospital, a familiar elderly nurse saw them coming and scuttled away hurriedly from the lobby. It didn’t matter. Thenmozhi’s mother would insist on her seeing them anyway because she had observed the way she administered injections. Thenmozhi suspected that she really loved Sister Nancy because she always smelled like she had doused herself in Dettol. “She is always neatly dressed, efficient and doesn’t bother with ridiculous chit-chat.” She had remarked to her previously, before imparting advice to Thenmozhi “Never trust nurses who stand around and chat foolishly. This is serious work, not a schoolyard. Any number of things can go wrong. One of your father’s cousins had a swollen arm for weeks because of a nurse’s negligence. Terrible.” Even as a young child, Thenmozhi wondered how Amma always happened to know someone who had very specific ailments.

“But from where?” Amma barked.

Amma let out a barely disguised chuckle. “This girl? She has no products. Did you try something belonging to one of your friends?” Thenmozhi shook her head.

“Doesn’t matter? You people have no conclusive answers these days – just conjecture…” Amma was on the verge of hyperventilating.

“Maybe spiders or ticks or bed bugs but it doesn’t matter because the treatment is the same.” The nurse replied, interrupting her firmly but calmly, and handing her a small tube of ointment.

“Apply this twice a day.”

Amma’s eyes were sparkling with irritation but before she could say anything, Sister Nancy said, “If you still don’t see an improvement, come back to see me in five days.”

She locked eyes with Thenmozhi one final time and, with her trademark industrial efficiency, was gone. On the bumpy auto ride home, Amma’s mind went on a journey of its own. They had no dog, so it couldn’t be ticks or fleas. It couldn’t have been bed bugs because Amma faithfully dusted and flipped the mattress once every few weeks. Their house was always spotless. Amma went through a checklist of possible causes. Thenmozhi stopped listening halfway through. She knew that Amma wasn’t the most reasonable person. She was once denied permission to go to a Bryan Adams concert because Amma had heard a rumor that at a concert, someone had injected an innocent concert-goer with a deadly disease.

“It must be the spiders.”

“Could just be the weather, Ma.”

“Rekha. I have been asking her to clean the ceilings. I am sure there are cobwebs. And it is that wretched woman’s fault.”

“It may just be mosquitoes?” Themozhi offered.

“Mosquitoes? This is nothing like a mosquito bite. Don’t be foolish. This is far more disgusting.”

The rash glared back at Amma, now an artistic blend of blue-purple and red-brown. As soon as the auto stuttered to a halt outside their home, Amma dashed into the house in a rage. A lack of clarity always drove her mad – whether it was to do with the ingredients of recipes, to the whereabouts of her jewellery or gossip from the neighbours. Thenmozhi followed her sullenly to find her standing near the corner of a wall in her bedroom, staring at what appeared to be nothing on the wall.

A few seconds later, a nervous Rekha appeared in the doorway, drying her hands on the sides of her sari.

Rekha hesitated, confused. “Look at it.” She repeated, her pitch rising.

Rekha’s eyes darted to the scene of the supposed crime and with a knowing sigh returned to rest on Amma’s.

“I will clean it, Amma, I’ll just get a broo-” Rekha replied, turning to walk away.

“No need to get a broom,” Amma retorted swiftly. “Just leave.”

“Out,” Amma screamed, her finger pointing to the door like an arrow on a wind vane.

“No. We cannot have any more mistakes in this house.”

“Amma, this is not the same as a bedsore. Paati was sic-” Thenmozhi tried to reason with her.

Rekha stood in the doorframe watching them like a tennis match.

Rekha obediently left the room. Thenmozhi felt the heat radiate from her neck and instinctively raised her hand to touch the rash. Amma walked around the room, inspecting every crevice. Rekha returned a short while later clutching a yellow cloth bag of her belongings and her blue rubber slippers.

“I will leave, Amma,” she said in a humble tone, but baring her paan-stained teeth threateningly.

“But you should know that that is not my fault. Nor is it the work of a spider.”

Amma knew this conversation was inevitable – she braced herself for a discussion about loyalty, forgiveness, the workload, vows to do better, and the pitiful condition of Rekha’s family but in the two seconds that she paused to consider her counter-arguments, Rekha continued.

“That,” she said, shooting Thenmozhi a look of disdain as she spat viciously, “is the work of a boy.”

*bindi – a colored dot worn on the center of the forehead.
*Yennanga – a word that Tamilian wives use to call the attention of their husbands.
*poori – a deep-fried, round, puffed up breakfast item made of flour and usually eaten with potatoes.

Photo by Steven Brown on Unsplash

Pritika Rao is an economist and freelance writer who lives in Bangalore, India. She is the founder of Rewrite Mag - a repository of rejected writing. Her work has appeared in The Times of India, Deccan Herald, The Alipore Post, Soup Magazine, and The Swaddle. In 2018, she won second prize in the Sunday Herald short story competition. Short fiction has been featured in the HBB Micro Fiction Anthology: Selected Top Entries and in Beetle Magazine. She has also self-published a book of poetry titled 'Eclipse on Joypiter' and a short novel titled 'Message Received'.