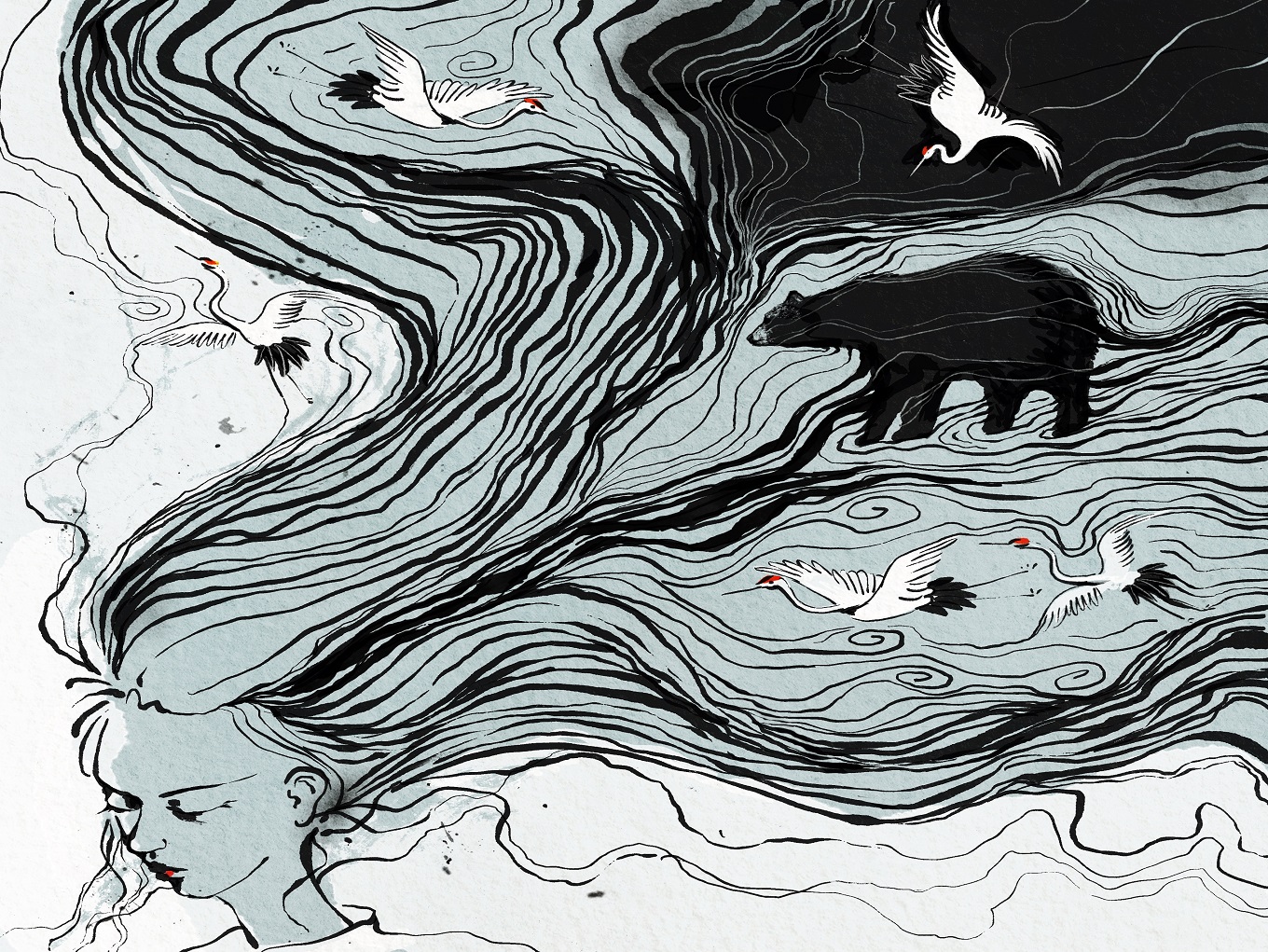 “God, I want your hair,” Mary shouts as I deliver five bags of groceries to her. Her wrinkly white index finger is pointing at my long black hair. It’s the middle of the afternoon on a cold winter Sunday in Minnesota.  I’m delivering groceries to Mary, my seventy-one-year-old mother-in-law biweekly, and biweekly, she says she wants my hair.

For a year I have been hearing Mary say she wants my hair. Back in March when the state of emergency was declared in the United States for the pandemic, Mary called me, panicking.

“Just follow the guidelines. You’ll be fine,” I reassured her.

Running out of ideas on how to comfort her, I gave the phone to my husband, Marcus.

“Mom, do you want us to get the groceries for you?” Marcus spoke flatly.

“Oh,” Mary paused for a moment. “I guess so.” Her voice lightened up.

“Fine.”  Marcus looked irritated. “We’ll deliver them biweekly.” He hung up the phone and began scratching his arms.

Marcus and I have been married for a year. Three months back, we returned to Minnesota, where he grew up in a suburb that he left as soon as he could. He came back due to a job transfer, but he almost quit his job rather than return.  Living close to his mother stressed him out.

Mary spoke mysteriously. Marcus said she repeated certain phrases until he guessed what she wanted. If he didn’t guess correctly, she sighed and her body dropped. She was disappointed in him. Since he returned, every time he had to participate in Mary’s guessing game, he had this allergy-like reaction. His skin itched, and he began scratching.

“You are going to bleed.” I had to cover his hands so that he wouldn’t scratch.

He sat on the couch with his hands covered with towels.

“You’re like a baby with no-scratch-mittens in the crib.”

“No-scratch-mittens for adult kids with mothers who suck their souls.” Marcus lifted his hand and shook his head.

Marcus would have no skin left if he had to see his mother biweekly, so I stepped into the role, but unlike Marcus, I didn’t have the skill to guess what Mary really wanted.

“I never imagined that I would have a Japanese woman as my daughter-in-law. I have a book about the history of Minnesota, if you’re interested.” Mary handed me a book. I thought it was a nice gesture and began reading the book. But it turned out, Mary had never read the book. Later, Marcus explained that she was letting me know that I wasn’t understanding her. Mary communicated what she wanted without directly saying so. I was supposed to get what she wanted.

This is why I’m surprised when she clearly says what she wants: my hair. I noticed that her grey and brown hair is thinning. Does she want my hair in order to look younger? Mary looks older than my ninety-year-old grandmother, who still works on the farm in Japan. Mary usually sits in front of her TV all day in her house. When she stands, she has trouble balancing her lopsided body.

What does she mean when she says she wants my hair?

I couldn’t figure it out, but she said it every time I brought her groceries.

I begin hearing her voice when I wash my hair.  I think about her when I’m pulling a clump from the bathtub drain. After all, I have more than enough to share. Thinking about her white face covered with my Asian hair is awkward, but she says she wants my hair. Pulling the small black animals from the drain, instead of throwing them away, I carefully wash them and let them dry, then place each clump in the bamboo basket. It’s like harvesting seaweed.

“This is ridiculous,” Marcus rolled his eyes when I first showed him the collection of my hair.  But then, he, too, became interested in my hair.

“Wow, your hair is pretty strong. And bouncy, too.” Marcus is now fascinated.  We’ve been watching my black hair grow and accumulate in the bamboo basket.

“It’s like a small black bear getting bigger and bigger.” Marcus is into this. We have nothing to do, no place to go, during the pandemic.

Today, I’m going to give my small black bear to Mary. The basket is full of my hair now, and today is grocery delivery day.  I put my hair into a ziploc bag.  Mary greets me at the door, and as always, she points at my hair with her white finger.

“God, I want your thick hair.”

I think she’s smiling, but it’s hard to tell with her mask covering her face.

“Here.” I excitedly pull out the collection of black hair and put it on Mary’s head, like placing a tiara. Mary touches the black animal on her head and slowly brings it down.

“It’s my hair. Marcus and I have been collecting.”

“Yuck!” She drops it on the floor. My small bear bounces a few times.

“Why did you do this to me?” Mary is now trembling and glaring at me.

“You said you wanted my hair.”

“That’s not what I meant. I didn’t mean that I wanted your hair.” Mary runs to the kitchen sink and washes her hands.

What does Mary want?

It’s harder to guess what she really wants when she actually says she wants my hair. She wants my hair not like that creepy man at the grocery store who caresses my hair with his eyes. Does she want it like she wants a shiny pin for her silk blouse? Or does she want my hair like she wants a different life, like mine, the hardy one of an immigrant? Whatever she wants, she wants it badly. She wants it without ever stepping out of her house, like the way she gets her groceries.

Yuko Taniguchi is the author of the volume of poetry, Foreign Wife Elegy (2004) and a novel, The Ocean in the Closet (2007), both published by Coffee House Press. Some of her awards include being a finalist for The Dayton Literary Peace Prize, the Kiriyama Prize Notable Book award, the Gustavus Myers Center Outstanding Book Award Advancing Human Rights, and the McKnight Artist Fellowship for Writers.