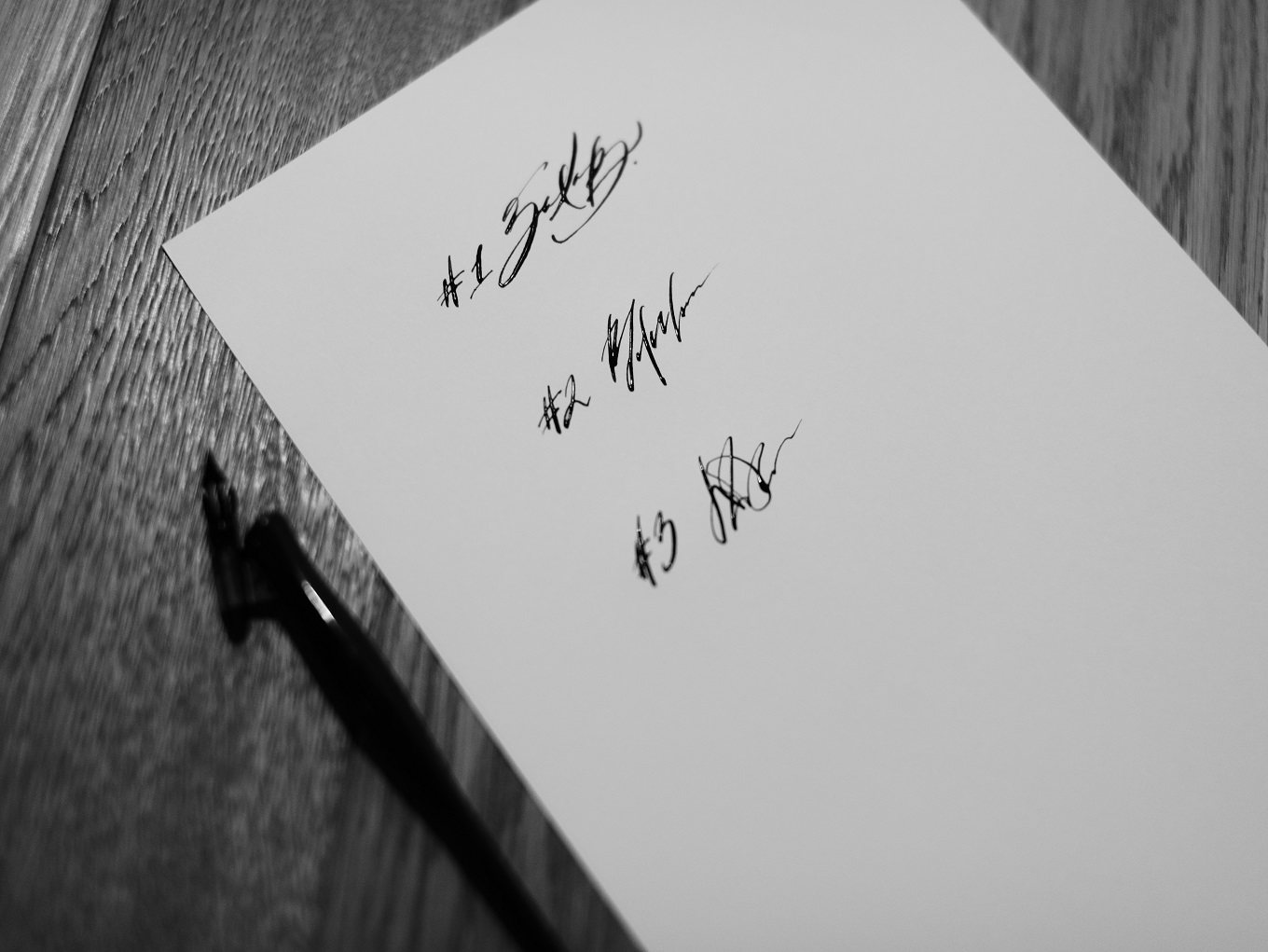 The first letter of Georgia’s name was supposed to be a tribute to a dead great grandmother on her father’s side that no one remembered. She’d always been grateful that despite her father’s insistence, her mother refused to name her Gertrude which was the name of the deceased great grandmother. When Georgia learned to write her name in cursive, she gave the G an extra swirl through the middle that looped across and the tail swept below the pale blue line on the wide ruled paper in Mrs. Deal’s 3rd  grade class. Mrs. Deal marked the extra loop with a red felt pen, writing her own cursive G over Georgia’s demonstrating how the extra swirl made Georgia’s G look like a Q.

The middle line evolved. Georgia’s silent act of defiance created a more dramatic and elaborate signature. Although she was right-handed, she tried to mimic her left-handed father’s signature in order to forge notes to get out of gym class. His signature was compressed, jagged and difficult to read even before his tremors turned it into an EKG readout. The secretaries in the front office accepted the forgeries choosing to believe her father must be a doctor.

She’d lost count of the documents she’d signed on his behalf over the past four years, though it was the first time the section required “next of kin” instead of “power of attorney”. Sliding the clipboard back across the counter, the nurse stood up and peered through his reading glasses on the tip of his nose. His eyes rose above the rim of the lens as he spun the clipboard back around to face her and tapped the signature line, “Would you mind printing your name, we need to make sure it’s readable.”

Georgia accommodated and watched her hand move on its own through each letter with certainty. Her name seemed foreign on the consent forms switching her father’s care from life-saving to life-ending. The diaper brigade of residents predicted his passing would take a few hours, advising her to call whomever needed to be called. The nurse reached across, took the clipboard again, and skimmed the white spaces for marked boxes. “That’s better. Okay. Do you have a DNR or advanced directives? They don’t seem to be in his files.”

Without answering she found the manila envelope she’d shoved in her backpack when she got the call from his assisted living facility that he’d gone to the hospital. She handed the neon pink DNR over before flipping through the blue backed legal documents that included his advance directives. His initials were scratched into the cream-coloured double bonded paper next to each instruction. The palliative section requested that pain or discomfort be alleviated even if it caused death; she couldn’t remember reading that before.

Georgia traced her finger over the ballpoint depression of her father’s signature, unable to recognize the letters under her fingertips until the nurse eased the documents away.

Photo by Signature Pro on Unsplash

Roz Weisberg is a recovering film producer who went back to school and received her MFA at Antioch University, Los Angeles. She's been published CNF in Drunk Monkey and soon fiction in Manifest-Station. She teaches screenwriting at UCLA