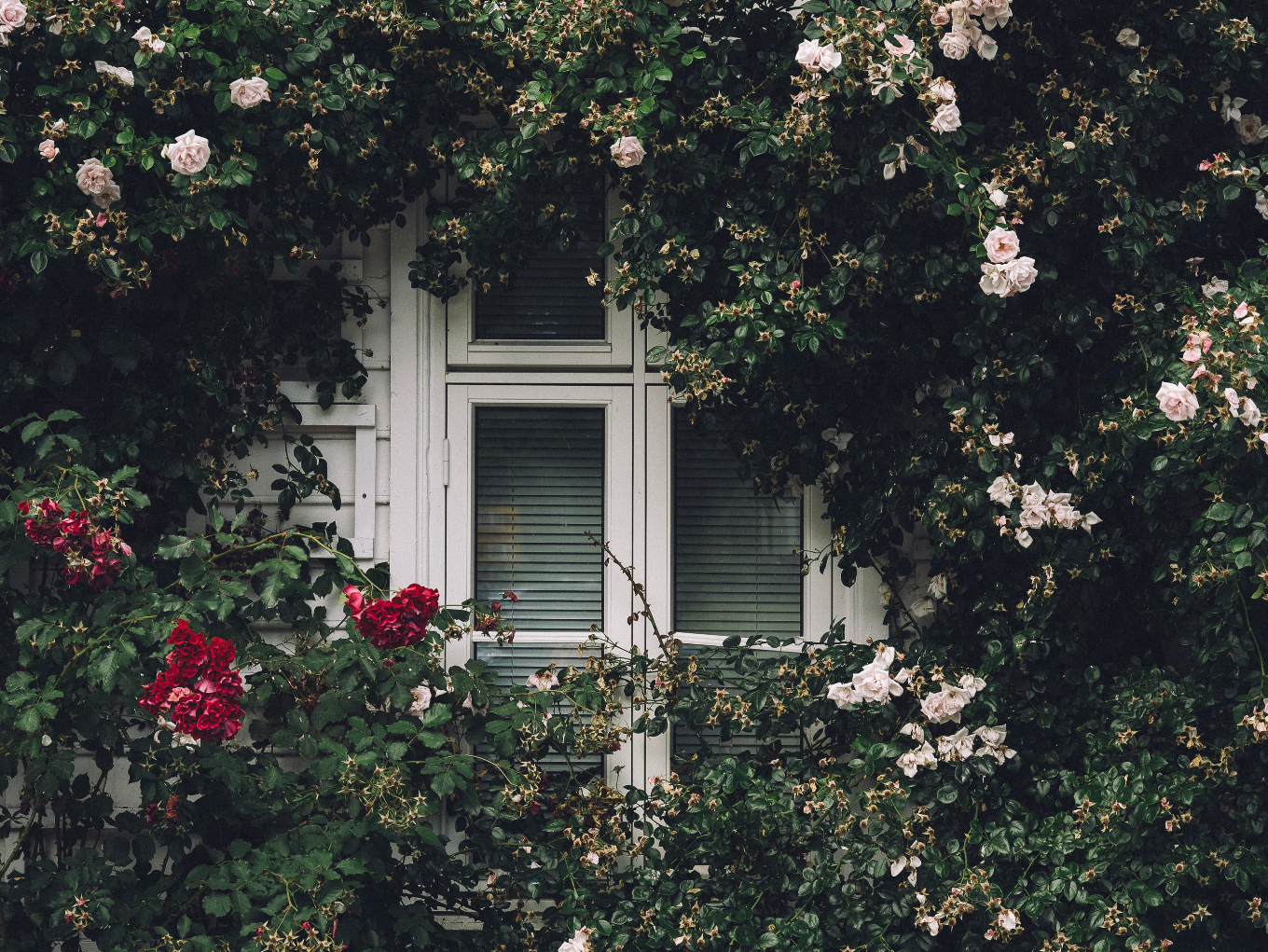 The Garden Spy is from Aamer Hussein’s anthology, Restless. The book is a collage of fugitive fictions, reminiscences of friends, and personal essays which, when read in sequence, offer an unofficial picture of one writer’s private and public lives.

Read a connected essay by the author titled The Yellow Notebook from the same collection here.

The roses were running riot in June. Evenings fell late; the long hours of light made him restless. He waited for the comforting shadows of night. That evening he stepped out before sunset to buy something he didn’t need, walked past the delicatessen where he usually got his cigarettes, and stopped at the church where red roses were blooming among yellow and white flowers in a little walled and elevated garden. A poster in the middle of the flowers announced:

Coronavirus affects all of us
We are a church that prays
Can we pray for you, your situation, your family and friends at this time?

He stopped to think about the people he knew of who were afflicted by the virus: his childhood playmate’s son in Karachi, and a dear friend of his youth in Islamabad. But he’d forgotten how to pray.

He took his phone out of his pocket to photograph the poster and the flowers. Just then, a gingery freckled man in shorts came out of a side door and removed the poster with both arms in one quick gesture without noticing Mehran, who said: Do you mind if I take a photograph of that before you take it away?

Oh sure, said the gingery man, replacing the poster and moving away from the camera’s eye. I thought you wanted to photograph the flowers.

I often come here to do that, Mehran said, or I just look at the flowers…

See that tree? The gingery man pointed upward. In March it produces masses of yellow flowers. But I can’t remember what they’re called.

They paused. Then both said in one breath:

But he couldn’t remember the mimosa flowering in March, neither this year when the lockdown was starting, nor last year when he was convalescing and homebound. He remembered, instead, filming the mimosa tree in a windstorm, three years ago, when the world seemed safer. And he remembered another film, another tree, rather a bush, a rose bush, flowering exactly a year ago. He’d seen the roses with his sister, and photographed her beside them on one of his first walks after his illness, not knowing that she wouldn’t live to see another season: she died before the year ended, of a cancer that took her away in three months. She was born at the end of March, and he in the second week of April. For a few days every year they’d been twins.

I saw a red-breasted robin in a box with a withered rose beside it. The robin was dead. The box had a glass lid and pattern of bare feet on its base. There was about an inch of water that didn’t quite cover bird or flower, and a sign that said: Please protect the robins. They are a dying species. Then I woke up.

Mehran was on a long call to Mimi, who had been self-isolating since before the official start of lockdown. London no longer felt like a city, but a huddle of settlements divided by invisible barriers.

In our stories and folklore, robins make their homes in boxes, Mimi said. And drawers.

He dreamed about the dead robin just after his encounter with the mimosa man. But he couldn’t find a connection between dream and encounter; only that the Urdu word for drawer, khana, came from the Persian word for home.

On his way back from the shop and the church Mehran often saw ugly things: blocks of stone that seemed to serve no purpose, piles of withered leaves and mulch, blue bags from which the rotting stench of garbage overflowed.  He took photographs of those, too, remembering the young man who once accused him of seeing only beauty in living things, of worshipping nature, of seeking reconciliation in human relationships. But the world can be brutal, he said in response, people tear each other apart, why dwell on ugliness in my photographs? The young man, who was stranded in his Sindhi village, published a story about a settlement in which all the old were wiped out by the arrival of a man from the city. And yet he had a habit of exclaiming: Kuchh nahin hoga (nothing will happen) when things looked bad, and Sab theek ho jayega (everything will be alright) when bad things did happen. He’d responded that way when he heard Mehran had cancer. But things do happen, Mehran texted back, and they don’t often turn out right in the end.  I’m prepared for that, but I’m not going to mourn a future that’s not to be.

Mehran had come to loathe those phrases. And to dread them.

He’d woken up that morning at first light remembering a phrase his mother often repeated:  Ye suffer from yourselves…

He knew she attributed it to the Buddha, but where had she found it? She was no longer there for him to ask. The syntax was archaic and very English, almost biblical. He googled and found the verse. From The Light of Asia, by Edwin Arnold. He couldn’t remember who had given him the book length poem about the Buddha’s life, or if he’d found it for himself: was it in Indore, where his uncle might have bought it for him, or Karachi, where he grew up and where he’d read the book?

But do we really suffer from ourselves, he thought? Or is hell made for us by other people, as Sartre wrote? Envy, malice, greed: don’t they affect us even when we feel we are strong? He remembered the bearded white-robed faqir, rattling with bells and green beads and chanting incomprehensible verses, who’d come to their door in Karachi one morning. His sister had given the man alms but he’d asked for twelve rupees. She’d run away to call the old cook to deal with him. But she heard him curse her as she ran: Khana kharab! He said her heart would be a grave and wished misfortune on their household for seven years. And she’d got a temperature that night and lain in bed for several days. Had she brought illness on herself, was it pure chance, or had the beggar’s presence induced it? What sort of holy man would utter curses?

His old friend Rafey died in Karachi a few nights ago; he was only 60. When he’d heard Mehran had cancer he’d said: but you can’t go before me! Rafey, with the fine shield of glass he wore to protect him from the world, who had been his loyal friend for 27 years, but never quite intimate – Rafey had suffered from diabetes and high blood pressure, and gone through a painful divorce after the death of his father in the two years before he died. The pandemic and enforced isolation had shredded his nerves: yet he’d kept on writing and recording videos. When they’d met in Lahore two months before, or spoken on the phone after lockdown began, neither of them imagined that they’d never meet again.

Mehran spent a night and a day grieving. Then, as he’d so often  done, he had turned his face to silent occupations: rereading Kalidas, whose poems full of flowers and birds and trees had filled his eyes with images when he was a young boy –  he’d been given a book of Kalidas’s plays and poems by his uncle in Indore.

He turned to The Light of Asia; he’d easily found it online and downloaded it in his e-reader. He sat down to read the poem.

Ye suffer from yourselves
None else compels,
None other holds you that you live or die,
And whirl upon the wheel,
And hug and kiss
Its spokes of agony,
Its tire of tears, its nave
of nothingness.

Reading on, Mehran found a story about a wounded swan the young Siddhartha saved, cured and then allowed to go free. It had stayed in his mind for most of his life until he retold it in one of his own stories, without remembering where he had first come upon it. As always when he read the Buddha’s words, he pondered: If we push over a sturdy rock and it cracks, is it the fault of the rock? If we contaminate a pond with piss or the sea with a city’s load of shit, are we to blame the pond or the sea for poisoning us? Did I set myself up for every act of omission or commission that made me bleed within? Oh Siddhartha, Gautama, Buddha: you might have taught me about the depths of compassion and loneliness, but you never could give me an answer about the wheel, the spokes of agony and the tire of tears which I knew but never embraced, in the fifty years and more I have meditated on your words. Compulsion to suffer can come from the acts of others.

But Papa Sartre, if ‘l’enfer, c’est les autres’, heaven, too, can be handed to you in a glass by the love of others. And by the love you give to them.

It was lovely here in Rome in spring but the wind and heat are taking over, Fabia wrote on WhatsApp, sending pictures of flowers from her garden. When you are up for it do come and sit in my garden or Mummy’s. When this lockdown is finally over. You seem to be surrounded by flowers on your walks. But are you wearing your mask when you go to the shops?

Yes, I find flowers in other people’s gardens. During lockdown I have become a garden spy.

Brilliant title for a story. You ‘see’ the flowers. I shall wait for it.

I’m planning to write it, yes.

Born in Karachi, Aamer Hussein now lives in London but frequently works in Pakistan. The most recent of his several works of fiction are Hermitage (2018) and Zindagi Se Pehle (2020).