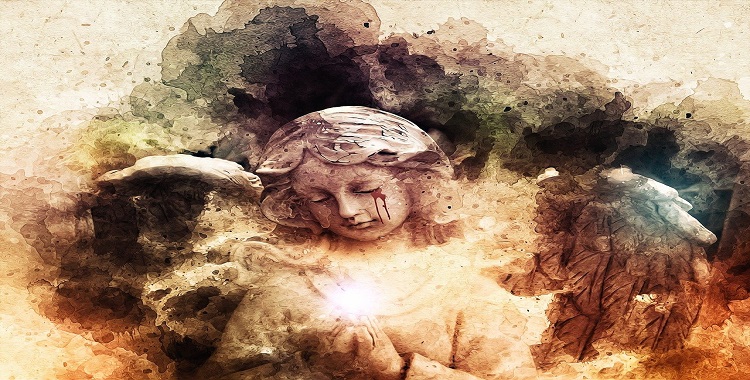 The tears came early that night, something she had expected. She had felt it building all day, a jagged boulder against her chest, sliding deeper into her stomach until it churned in a vortex of dread, guilt and fear.

She saw the dead man again today. His eyes, like candles on a windless night. Accusing. Whispering. It was she who ended his life. He was right, of course. She hated herself for it. Her cheeks were red and puffy, as she knew her eyes must be. A sudden sob erupted from deep in her throat. She hadn’t expected it to come clawing out of her, but there it was.

She didn’t know his name; that was probably for the best. Her mind scrambled like burned fingers on every small detail she could remember. His clothes – dirty. His hair – once brown, now streaked with grey, in disarray, someone who had not bathed in a very long time. His face held the hollow sheen of someone who lost too much weight too quickly. Even as she looked into his dead face, she thought how unremarkable it was, devoid of anything that might have separated him from the myriad others before him.

His family wouldn’t think so. If he had a family. Everyone has a family at some point. The tears came dragging red hot lines of salty wetness down her chin, darkening the blood-stained shirt. Why did she wear the shirt each night? She needed to burn it as she had the others. But the ghost would remain. The burning, unblinking, unfaltering eyes. Their accusations, until she found another to take their place. It wasn’t a solution.

She couldn’t remember the others, what they looked like, or even how she had killed them. The things she had done were unforgivable, inhuman. She read the paper each day, scanning the headlines, reading every article in the desperate hope that someone would have found one of the bodies. Surely, by now at least one of the bodies! Each day, the paper was silent, as if the city had swallowed up each of her victims, taking all traces of the vile acts down into its depths. The violence she slashed through the night remained hidden deep in the places where civilization refused to crawl.

Tonight, she would put an end to this. She would stop outside its monolithic pillars, columns like the ancient Parthenon in Greece, where the gods dwelt. Only they could judge her and release her from the guilt that eroded her from the inside. The ghost of the man she had killed watched with a stagnant gaze, daring her to take her car keys and drive once more to the police station, as she had done three times during the week, wearing the bloodied shirt each time. Do it tonight, he seemed to say. Do it before you kill anyone else.

The keys were in her hand. She hurried down the stairs of her apartment building. Her hands shook as she unlocked the car. What would it mean to turn herself in? A confession? Where would she even begin? She refused to think. She drove as though in a dream.

She stood outside the large police building. The letters shone proudly in the washed-out spotlight, making the stone walls look all the more imposing. This would be it! Her final night of freedom. Perhaps tomorrow she would know peace.

She had to do it. She had to tell someone of the murders.

A voice broke through her thoughts, a voice that sounded like her very salvation. “Excuse me ma’am, could you spare a dollar?” the man asked. His clothes were dirty, his face as unremarkable as the others. “I left my purse in the car over there. If you’ll follow me, I think I have a ten.”

Image by Enrique Meseguer from Pixabay

Jeff Thompson lives in Colorado, working for his local Police Department in their Records section. He spends his free time hiking in the beautiful mountains and writing every spare moment available. He has self-published two previous books on Amazon with a third on the way. He attributes any success to his lovely wife and their wonderful friends and family.