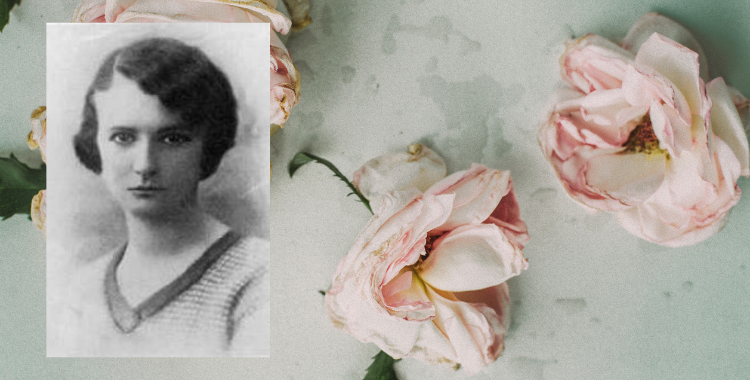 Come, my sweet friend:
on the firm white road
until the whole valley turns blue.
Come: it’s so sweet to walk
near you, even if you don’t love me.
There is so much green, on every side,
there’s so much scent of thyme,
and the mountains are so spacious
in the gilded sky:
it’s almost as if you loved me too.
We’ll come down, up to that bridge
supported by the roar of the cascade:
there you’ll continue on your way.
I’ll remain on the pebbly shore, among the bushes,
where the water doesn’t reach, among the stones
clear, round, motionless, like spines
of a crouching herd. Through my glassy tears,
like a flawless lens,
I’ll double the stars.

About Antonia Pozzi’s poetry:
Antonia Pozzi, born in Milan in 1912, lived a brief life, dying by suicide in 1938; none of her poetry was published during her lifetime. Her work is significantly underrepresented in translation, and her omission from the 2004 Faber Book of 20th Century Italian Poems has been called “the most obvious lacuna.” (1)

In her biographical materials (in Alessandra Cenni’s ‪L’età delle parole è finita: lettere) and her diaries (in Diari e altri scritti, edited by Onorina Dino and Matteo M Vecchio) one may see Pozzi as a representative woman of her time. She expresses her desire to be an obedient daughter, a future mother to children. Yet at the same time she is both independent in bearing and uninterested in the domestic tasks associated with love and marriage. Such conflict leads her to consider herself mentally ill and to often lean toward her poetry as an ideal for which the real life does not allow. In these materials one intuits an essential early 20th Century female experience similar to that with which we associate American poet Sylvia Plath, finding in Pozzi’s “feminine identity…a troublesome source of conflict.” (2)

It is interesting to note as well that, like Plath’s, Pozzi’s poetry was posthumously altered by a male figure (in Pozzi’s case, her father Roberto) to reshape her public image (Marrone, 1488). As one example of distinctly misleading manipulation, in her poem “Odore di Fieno,” the original lines are “Tutte le lagrime di questo ignoto interrotto cammino / tremolano nella mia anima impura” (“All the tears of this unknown interrupted journey / tremble in my impure soul”). Pozzi’s father removed “impura” (impure) so that the speaker does not possess an impure soul.

Her father scrubbed any evidence of his daughter’s passion, her sense of her flawed humanity, her love affairs, and her questions of God. In 1955, Nora Wydenbruck’s translations of these posthumously revised poems —translated with the help and under the close surveillance of Roberto Pozzi—reproduce a sanitized edition of the original work for English readers. In 1989 editors Alessandra Cenni and Onorina Dino restored the poems to their original form in Parole, the authoritative text from which I work.

Rebecca West contends that Pozzi’s work has been potentially “assimilate[d] …entirely to the dominantly male tradition” and that even though Eugenio Montale [who wrote the preface to Pozzi’s posthumously published Parole ,1939] attempted to rescue her “beyond the stumbling block of feminine poetry,” he “falls prey to a maschilist perspective in viewing Pozzi’s promise precisely in terms of those qualities that are most similar to the then dominant Hermatic (male) tradition.” (3)

Amy Newman I am the author of five poetry collections, most recently On This Day in Poetry History (Persea Books). My translations of the poems of Antonia Pozzi appear or are forthcoming in Poetry, Michigan Quarterly Review, Exchanges, Arkansas International, The Bennington Review, Columbia Journal, and elsewhere; my translation of Pozzi’s letters appear in Delos and Cagibi. I teach in the Department of English at Northern Illinois University.

Antonia Pozzi, born in Milan in 1912, lived a brief life, dying by suicide in 1938; none of her poetry was published during her lifetime. Her work is significantly underrepresented in translation, and her omission from the 2004 Faber Book of 20th Century Italian Poems has been called “the most obvious lacuna.”