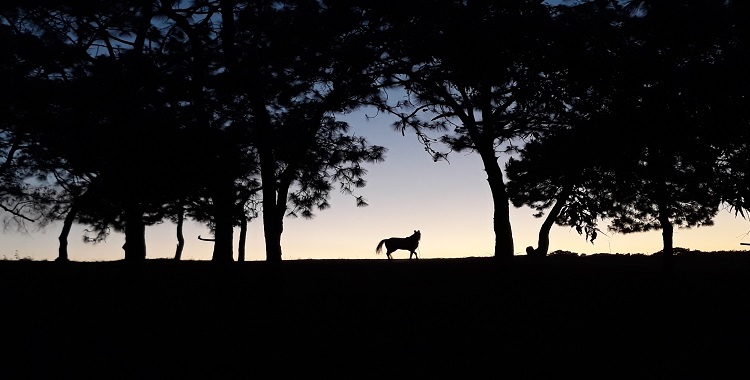 That summer at the ranch, one season
before Stanley hung himself in the toolshed,
with rope worn from countless tie-downs–
choosing his own handiwork over cancer–
there was a wildness in the air, crows
breaking formation, jittering overhead,
as we cooled our horses past dusk,
the four of us restless.

We leaned against the holding pen,
our cigarette tips skimming the darkness;
I sank into your story as if it were my own.
Whiskey, a shotgun, and your father’s rage,
blown past all holding, left your mother crumpled
on the cabin floor, more broken than bloody.
You were twelve, motionless, dead-numb watching
your father pack the one good horse and disappear
somewhere up in the high desert. Minutes,
maybe hours later, you walked out alone,
never to see either of them again.

Suddenly it was night, and the stalled horses
rustled, whinnied now and then, echoing against
the still blue hills, forlorn sounds without answer
or antidote.  More than anything I wanted
to touch you but it had become impossible
to cross the distance between us.  We held our
human shapes but now they seemed mere outlines
for purposes of classification: person, not sky.
There was a confusion of eyes; though reason
stands they were yours, dark and bottomless as the sky.

Maybe it was only the boy I could fathom:
pale, thin, bare-armed, bruised at the wrists
as if someone had yanked him long and hard.
Your arms were shut against your sides, without
apparent scar, and suddenly I was struck by
how very late it was. Still crossing worlds of
sunburnt hills, that boy was years from here.
I would never touch him.

Photo by Harbey Valdez on Unsplash

Paula Friedman's poems have appeared in "Prairie Schooner, "The Michigan Quarterly Review", "The Concho River Review", "The American Journal of Poetry" and others.