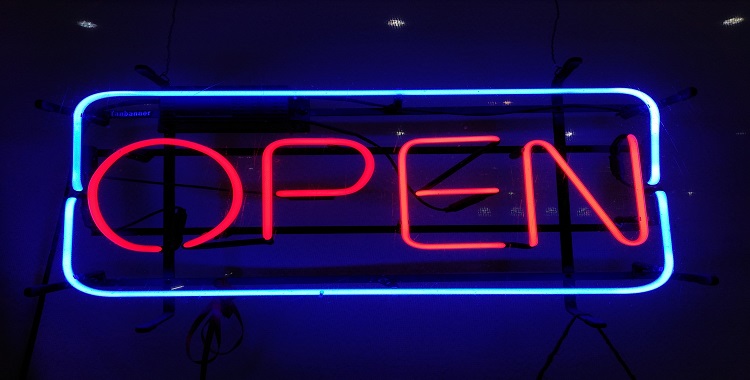 is spic and span; you could eat off the floor
if there was a floor; there isn’t, just
a huge hole you can’t see at first, as a hot
octogenarian greeter distracts you by saying
Come again as you enter the rim, to which
you say I never came the first time. Indeed:

at the rim’s entrance, there’s that automated
climax machine from Woody Allen’s movie
“Sleeper” called the Orgasmatron, but the line’s
so long for it (for pairs or solo, no more),
that it’s now closed for aisle-less clean-up. Imagine!

No, don’t.  John Lennon masks are on sale BOGO;
ammo is not available for comment.
Here guns talk, defend their positions, We don’t
kill people, we kill guns or magazines—that’s
it: blame the bullets, not us. In fact, the bullets
have been amassing as the guns lobbied
in the lobby of a Galveston Wal-Mart, but
you weren’t listening, your kid has been working
the claw machine and crying, so close, so close,

as the claw dumps its iPod on top of plush
toys that are useless because you must forge
a connection, imagining life where a pile
of inanimate stories beg for your attention
and toys next to Hell have no life of their own
that your kid can devise dialogue for and with.

Did I say this was the Wal-Mart from Hell?
Forgive me, I meant to say Next to Limbo.
Don’t ask me where I was, I was making out
with the octogenarian—Floyd—who brought
years of experience to culminate in one two
worded phrase Hello and welcome; his kiss can
express his relation with past lusts distilled
on his medicated tongue. Hello. Hell’s not
really Wal-Mart, just the last hurrah of liberties
before you must make a choice, before
it is made for you within the decisive point
of a firearm: hole, or lobbied pile? Floyd unlocked

our long kiss then just gave me a cart, looked
behind my head and said Welcome, brushing
me aside. I held on to his vest until it gave way
and I put it on and said Welcome myself. Floyd kissed
me again and then smacked me a good one, fist
to lip. A man has a job to do, just like women.
He shrugged and then jumped in the hole. Hola.

The hole has a sign above it, Abandon
Diversity and Inclusion, as a New Floyd leads
the crowdin their hourly cheer: Gimme a W!
Gimme an A! an L! Gimme a ‘Wiggly’! to which
New Floydshimmies his hips to make virtual ‘wigglies’
in air, which was supposed to mean ‘hyphen’.

Nobody ever says hyphen in Hell
unless you’re making a dash for it. But
Floyd 2.0 never gets to the chant’s final letter
as carts have piled up like yesterday’s bodies,
and who will wipe them down? I was hangry,
not knowing if what I felt was anger or hunger,
American diet bar none—if Limbo has no buffet,
Hell is just another word for a Super 8 motel

at the lip of the hole you can’t see with no break
-fast bar, not even coffee. But there’s also a fragrant
diner next to the Wally World next to the hotel,
as if Heaven were one long olfactory act with
the cooling promise of tolled and housed embodiments,

housed in a greasy spoon from which comes heavenly
smells, not much else. The waitresses there
have angelic voices: they greet you and say
Hon, we’re fresh out of wings. This is when
you know you won’t get any kind of wings.
Suddenly all I want is Floyd, but he is no longer
on duty. Forever. Instead of Old Floyd, there’s no choice:

let us mourn all box store lives lost, their spirits
unleashed and contained in one reinforced,
besieged shelter of mortar and brick where
the shelves multiply as the ceiling stretches upward,
just shy of a locked paradise, where the price
of entry rises as you demand to be marked down.

The silvery-fingered claw of the stuffed toy
machine beckons, shines like the jagged steel
riveted lip of the famous big hole, where to buy
time, there’s one huge do-it-yourself checkout
stand: the catch is, you’ll have to stay and check
out someone else’s stuff forever, sorting and sorting,
bagging and watching as New Floyds come and go,
then turn into uniformed, framed photos, head
and torso only, staring from a decorated section
on the exit wall, where no one tells them Thank you

for your service any more. If you listen closely
as you leave to leap into the hole, you’ll hear them
softly chant, Take it from us, it’s not the end
of the world—and as you stop bagging somebody’s
things, having had enough of service, or servitude,
whichever was first, you’ll choose to leap with
unfazed glory wholly aware of your own sacrifice,

and let the headshots watch as your abandoned
bagged things rise to re-shelve themselves but
outside, to make a mound out back behind Wally
World, where one great seagull-yawping baked
diverse landfill burns from the inside out.
Damn, displays are gorgeous. Damned displays
are all that’s left to organize with any surety, pure
within their grounded stance of complex surfaces.

For those not committed to hole-leaping yet, there’s
missed bargains and cupcakes to briefly grieve,
no store could house your hungers for long, just wait,
re-set, re-load, and see what’s targeted down the street.
Shopping is a pleasure until the receipt finalizes
your reach’s extent. Floyd gets the last word: he left
me a plain white note where, inside, nothing survives:
there had to be commerce in place of a pulse
or a finite point, as he’d simply drawn a deafening blank.

Photo by Kirill Sharkovski on Unsplash

Mike Perez earned an M.A. in Creative Writing from FSU and an MFA from The University of Houston. His dad was an aviation expert and his mother is the acclaimed poet Nola Perez -- thus Mike considers his current occupation as a professor in an aviation university to be merely Kismet (and DNA) fulfillment. His poems have been published in GLASS, Bloom, Crab Orchard Review, Route Seven Review, The Journal of Florida Studies, and at winningwriters.com as a finalist for their annual War Poetry Contest. Book chapters have appeared recently or are forthcoming in The Susan Sontag Anthology, Queer /Adaptations, The Power of Makeup, and Essays On Billie Holiday, an anthology for which he also was lead editor.