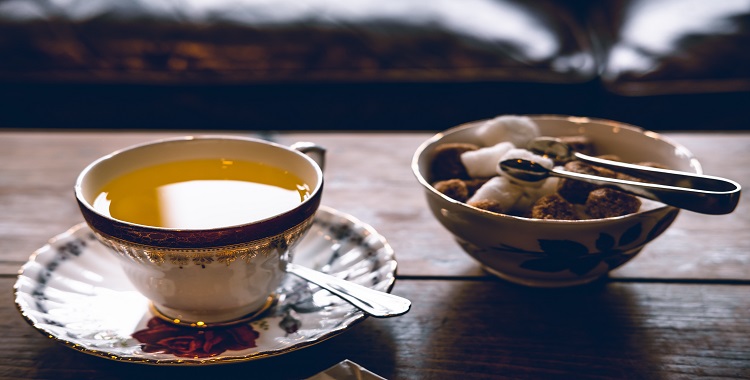 The first time our neighbor, Ms. Plinkett, made me a cup of tea, all the illusions of adulthood and demure culture I was working so hard to embrace slipped away as the bitter black tea slid down my gullet. I had gone to Ms. Plinketts to practice tea etiquette — now that I was of a marrying age, I would need these skills that my mother hadn’t practiced since my father passed years prior. I sipped the tea properly, but the minced leaves remained on the side of the pristine porcelain cup, and to my surprise they spoke to me as clearly as Ms. Plinkett did. Articulate. Concise. Finite.

I knew. I trusted the leaves with the truth they were entrusting to me.

She’s got a poison in her blood

I told her without hesitation. A kindness I hoped someone would extend to me — but she didn’t think me kind.

“If anyone’s filled with poison, it’s you!”

I was rushed from my seat, the teacup whisked from my hands.

I arrived home and told my mother what happened, and how I had heard the hum of the tea as it glared at me from the edges of the cup, almost as if by mingling with my body it was mingling with my mind.

Once the teacup had left my hand, however, the hum had gone silent.

My mother listened with rapt attention, nodding occasionally, asking what type of tea it had been — black, I told her. Slightly oversteeped. Two lumps of sugar, a splash of milk. Sadly, no honey.

My mother said she’d go chat with Ms. Plinkett the next fortnight, and indeed she did.

“You were right,” she said, her eyelids practically glued open, as though she saw something both familiar and foreign in my attentive gaze, “she’s got a disease of the liver. She said she hadn’t told anyone, not even Mr. Plinkett. She’s going to receive treatment, but it doesn’t look good.”

Somehow I had known that. Or the tea had known that and told me. Regardless, I could feel it wasn’t long before the poison in her blood would win. A snake, winding through every inch of her body. Lurking, patiently, as it stores its venom, waiting to bite.

Ms. Plinkett told her lady’s group about her experience with me, and we were invited to each of the member’s homes in turn, taking both tea and coin for the wisdom only I seemed to be able to hear. Lying sisters, aging mothers, cheating husbands, old lovers, wild children, money fears — nothing was off limits for the truth that came from the tea. Some women took notes, some cried, some had friends there to comfort them from truths they seemed to know before the tea told all. The one consistency between each of the women we spoke with was their gratitude. They always said thank you, they always meant it, and they always valued the truth I brought to the table.

As the months went on, we were invited to finer and finer homes. Ones with tile, ones with granite, ones with marble, ones with polished silver, and finally ones with gold. I drank tea after tea, until I was sick of tea — but it wasn’t sick of me.

One morning, we returned to the home of a Baron — I had read for his wife a few weeks prior, and I was sure she had begged him to meet with me. He was the first man to seek my insight. We sat at the table as my mother chatted gaily in the salon with his wife, my former client, but the Baron and I sat in the kitchen as was customary for these moments of sipping and scrying.

“What happens if you ask questions for yourself?” He inquired.

“The leaves don’t stick to the sides of the cup. They all slide to the bottom and pool at the base. I see nothing for myself.”

Making tea was something I assumed he rarely did himself, and rather had the house staff do for him. But, as my mother and I had figured out in the first home lined with polished silver, if the person who needs the reading does not make the tea, the tea does not talk.

So here stood a Baron, with his back turned, making me a cup of tea.

He returned to the table and offered me the cup and saucer, forgoing any tea himself.

He ran a hand through his hair, a sad pile of thin, greasy straws, “I’ve had a difficult few weeks,” he started, his words clipped and curt.

I sipped at the top layer of tea, just barely cool enough to drink.

“You may not remember,” a low chuckle as he leaned back in his chair, “but you told my wife I was being unfaithful to her.”

I gulped. I had forgotten. These readings blended together after a while, and I knew I had seen so much infidelity, really, keeping track wasn’t possible —

“And then a week later you told my mistress that I had no intention of leaving my wife.”

I choked down more tea, my throat closing around the bitter liquid. I wanted this reading over as soon as possible.

He leaned over the table, his large frame suddenly much sharper, his shoulders all angles, his face all malice, “So I needed to see you for myself, and properly thank you for those truths.”

I drank the last of the tea.

Two lumps of sugar, a splash of milk.

Photo by John Tecuceanu on Unsplash

Andrea Cueva is a Cuban American woman from San Diego, California. She is currently pursuing her Master’s in Creative Writing from Harvard University. Her writings work to break down barriers between the known and the foreign, all with the feminist mindset of providing accessibility and opportunity to all. By trade and education, she is a writer, folklorist, and cultural anthropologist.