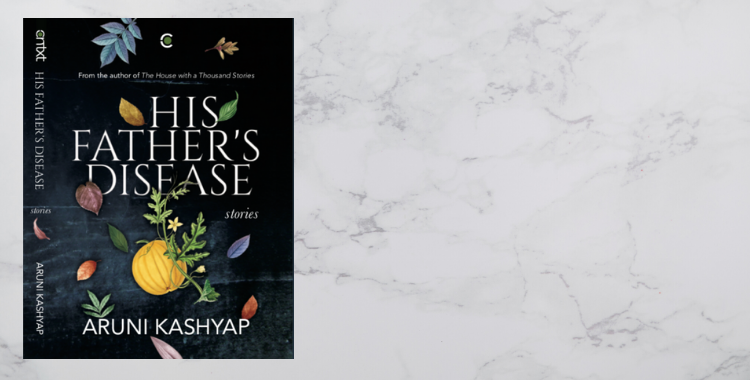 The central focus in Aruni Kashyap’s collection of short stories titled, His Father’s Disease, revolves around issues like violence against women, parental problems, the subtle racial stereotyping in the United States, migration and the associated travails. The location in the ten stories in the collection jump back and forth between Assam and Minnesota with some stories sharing the same characters. Though the stories follow the lives of characters hailing from Assam, the angst of the region brought about by violence and militancy, feature only tangentially in most of the stories, which makes it all the more unsettling when it comes up.

In the very first story, we see the main character who is a writer being questioned about his reluctance to write about the disturbances in his native place. This story titled, Skylark Girl, which evokes memories of Easterine Kire’s work, talks about the myth of Tejimola whose stepmother ill-treats her until she finds a way to get back at her. The narrative alternates between the folktale and the experience of the main character, a panellist at a literary festival representing the literature of his region. Sanjib is asked why he shies away from writing about the violence of his region. When he answers that the depth of stories existing in the culture of his native land transcend the current and oft repeated perspectives of the region, it is not very well received by his co-panellists and the audience.

One facet that recurs in many stories is homosexuality and the outrage it seems to bring about whether in the villages of Assam or in American cities. The story that lends its name to the collection alludes to this premise and it comes up repeatedly. Neerumoni, the central character in the titular story, also appears in ‘For the Greater Common Good,’ which is where readers meet her first. Here we see her trying to cope with the rape of her daughter and imagined hauntings from an ancient manuscript handed down to her husband from her father on his deathbed. She had married for love, against the wishes of her father, but he patches up with his daughter only when he is dying. It is only later in ‘His Father’s Disease,’ we learn along with Neerumoni that her husband had courted her only to get close to her brother and that her son too has ‘his father’s disease.’ As she bravely holds the threads of her fraying life, she realises that her acceptance of her husband’s and later her son’s sexual preferences would not make the society accept them. The last story in the collection, Another Anthropology, also alludes to the same as we see how the father of a mixed race gay couple finds it difficult to accept his son’s sexual preferences.

One of the most haunting stories in the collection is ‘Before the Bullet’ which tells the story of Digonto who arrives from the U.S. after six years. Even though Digonto cannot wait to get home, he does not hurry back, taking time instead to savour the sights and smells of his village, unaware of the danger ahead. From the very first sentence, the reader is alerted about the violence to follow and the slow pace of the story only heightens the sense of dread.

The stories in the collection draw attention to why it is important to accept the choices of people whose lives may not be what is apparent at first glance. It also demonstrates that ordinary life in regions beset by violence are rife with the same chaotic pathways for the inhabitants as they are in peaceful places, the instability only amplifying the cacophony of everyday existence.

Fehmida Zakeer's work has appeared in Indian and international publications including National Geographic, Hakal, NPR, The Hindu Business Line, India Today and others. Her short stories have appeared in print and online journals like Indian Quarterly, Out of Print, Linnets Wings to name some.