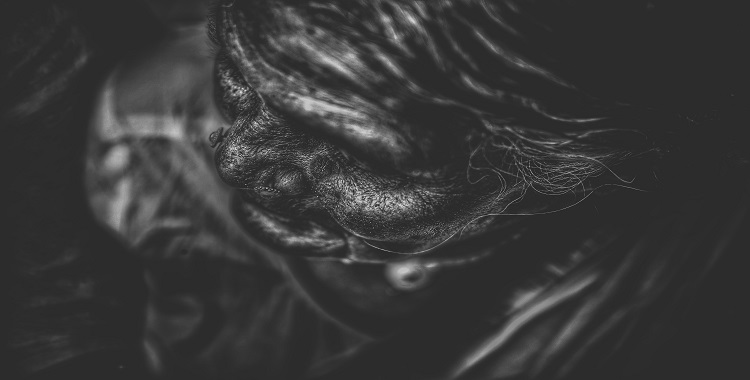 Grandma moves sunflower-faced in the kitchen, her hands breaking like leaves. Outside, deer eat the flowers. Long stretches of land where we search for golf-balls, their cracked white skins making egg-marks in the soil.

You don’t know what it’s like to have a son that hates you.

A bioengineering degree unused in the attic, press gathering rust blushing chemical. There the Fragonard, there the Picasso, Matisse, Renoir, eating peanuts in the kitchen, watching the birds behind glass.

You don’t know what it’s like to have a son that hates you.

The big house gets lonely in the afternoon, shadows of stone beasts dancing on the walls, tusks cleaving stale air. Last year when her mother died Grandma raked through the nursing home, scent of cat piss wounding her lungs. When her brother died she was not allowed to grieve, strict instructions he left behind, A will in the first person. The dreamscape portrait of The Actor in the living room, his Thick white collar a leash tethering him to the Maryland sky. Fat ropes of paint build cheeks, Hands, vessels, eyes with white meringue filling spinning round and round like rags in the Ice cream machine, Thanksgiving in Florida with windows blown out by the rain,

you don’t know what it’s like to have a son that hates you,

Sometimes a migraine, or another dull hum beating fear behind the black chalk Eyes of a line drawing, the same heady taste from youth, from motherhood, from Frozen slabs of cheese in the freezer, so there will always be enough. Little pills in the morning and night and a fat round of yarn to spin into shapes when hands need something helpful to fill their heartbeats with.

Sivan Basha Piatigorsky-Roth is a rising senior at Wesleyan University and an aspiring writer, poet, and comic artist. She is a lover of books and literature and has been reading voraciously her entire life.