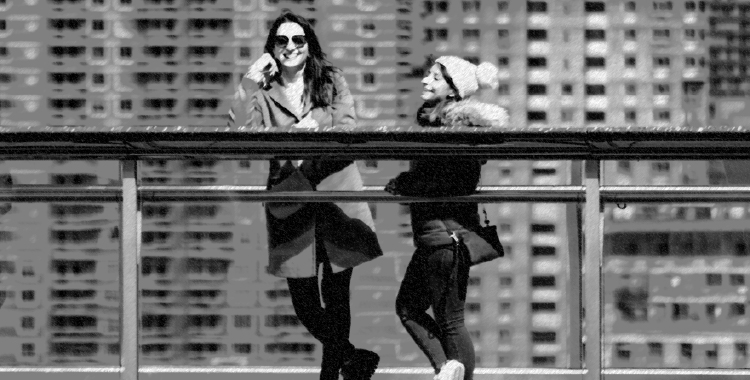 Marie-Laure and I frequently met in the Manhattan School of Music hallways as we staggered out of practice rooms at closing time.  We were both older students and we both had a certain je ne sais quoi – something like a fanatical drive to succeed marinated in last chance to do it sauce.  She had interrupted her European concertizing career to study with the master pianist holding the key to the treasure chest of virtuosities she was trying to pry open.  I had quit my office job, betting the student loan I could become a working musician.

Marie-Laure left France barely speaking English, but what did that matter, she reasoned, she was here to play the piano.   As it happened, she quickly found out that it did matter, quite a bit. She couldn’t find books in the school library, participate in music history classes or understand the concept of a bagel and cream cheese, wrapped in saran wrap, sitting on the cafeteria shelf.   C’est quoi, ceci? she mused aloud, while I-really-should-be-practicing hands quickly reached around her.

I decided to assist although I hadn’t spoken French since, or arguably during, a dramatic romance with a dramatic French man in our dramatic twenties – misère, misère!  “C’est une bagel, c’est comme pain avec fromage,” I clarified.  With the permanently perplexed expression of one accustomed to choosing from two hundred and forty-six French cheeses, she replied, “Zis is cheese?”

Noting that I just spoke to her in French and she answered in English – just like in France! – I continued.  “Oui!  C’est fromage!” – for the rest of us.

We forged a French and English in Action based friendship, studying together in the library, sitting together for lectures and attending concerts.  Our Frenglish was such that once, on a bus traveling Riverside Drive, an elderly gentleman tapped my shoulder and inquired, “Pardon me, but her English is horrible, your French is very bad –- is there a language either of you speaks well?”  Marie-Laure and I took the compliment, and continued on until, over time, we lost track of whether we were speaking horrible English or very bad French. For example, Marie-Laure, thinking she was speaking French, would say, “Tell eem I want to buy ze edphones” and I, also thinking she was speaking French, would translate, “She wants to buy headphones.” Eventually, it would dawn on one or the other of us why the salesman was staring at us.

Our communications about music were different.   When we were in a two-piano practice room, we usually only needed short phrases like “trop vite” or “merde!”

After graduation, Marie-Laure returned to France and resumed concertizing, teaching and organizing music festivals.  I patched together a freelance career, mostly teaching and playing for ballet classes. Marie-Laure and I kept in touch by postal mail.

A few years later, I got married.  My then-husband accommodated my piano practicing by purchasing an electric piano for important times when he needed absolute quiet, like during Yankee games.  After I had a baby, both pianos became toy shelves. What I had previously thought of as “getting the mail,” became a game of fit the-mail key into the slot. Sometimes, the prize in the mailbox was a colorful postcard from Marie-Laure with exotic stamps and a bubbly message like “Bonjour!  I am playing at the Taj Mahal – so beautiful – you cannot believe how much they love music.  Je t’embrasse!”  I would gaze at the picture of the Taj Mahal for a few moments, then stare at the Fire Department evacuation map posted by the elevator: “You Are Here.” It struck me as a psychotherapeutic insight.

When one of Marie-Laure’s post cards announced she was coming to New York, I of course invited her to stay with us and she of course accepted.  I was looking forward to happy reminiscing and bracing for a major flare-up of my stay-at-home mom conflicts but to my surprise, neither occurred.  Instead, shortly after she arrived, Marie-Laure began complaining. Car horns and other street noise elicited, “But in France we don’t av zis.” She stepped over bottles in Inwood park, disdaining, “But in France we don’t do like zis.”  She shrieked at a plastic bag tangled on a tree branch just outside the famous Zabar’s gourmet market, and out came the French camera. “Yes, yes, la poubelle dans l’arbre, I must take zis picture so zey can see because really, in France zey cannot believe.”  Inside, Zabar’s sold bagels with zis is cheese? cream cheese.

My husband had a knack for storing facts that might come in handy in an argument, but he had no way to favorably compare cream cheese with Appellation d’Origine Controlée Camembert de Normandie. Therefore, he said acidly, “Tell her that during the Libyan Air Raid, France wouldn’t let us use their air space.  We had to fly around them.”

It was really getting very hot.   To avoid the planned long drive to the shore, with Marie-Laure in the backseat cooing, “Me French, you Tarzan,” to the toddler, I suggested changing the destination to Orchard Beach in the Bronx.

This proved a bad move for Franco-American relations.

It was a blanket-to-blanket, radio-to-radio day.   We waded into the Long Island Sound, through a layer of slime; watermelon rinds, potato chip bags, an open pizza box with leftovers all floated by.  Click, click went the French camera. “Yes, but zis is so much New York!” She then invited us to stay with her in France, to swim in pristine waters washing over immaculate white sands.   I could hear my husband thinking – So we can see how it’s done.

Had she not seen garbage and heard noise when she lived here?  Actually, probably not. On a student visa, she didn’t see the garbage in the trees, because she wasn’t looking at any trees outside of the enchanted forest of learning and beauty that comprised the designated grounds of her musical ivory tower.  Trash on the well-heeled sidewalks between Carnegie Hall and Lincoln Center does get swept away with a speed commensurate with that of the dollars sweeping in. We were, all three of us, overlooking that Marie-Laure was no longer a long term resident student.   She was a French tourist, clicking her camera.

She was right about Orchard Beach being so much New York.   It’s so much New York that it is not on any travel agent’s recommended itinerary.   In fact, Orchard Beach, Inwood Park, even Zabar’s – it’s too much New York for anyone who doesn’t call this place home. Marie Laure was really French.   I was really American. My romance with a French man and French culture, watching Truffaut films, reading Verlaine and Rimbaud, with Chanel on the pulse points – that was just love on a student visa.   We were only ever reading subtitles; we were never really fluent.

The next time Marie-Laure came to visit, things went quite smoothly.  I think, without discussing it, we got our national identities and boundaries straightened out.   It’s nice to share Chanel fragrances, but you can’t just spray on a national identity, it’s great to visit the Met, but you can’t live there.    I think we finally understood that the place we both called home was music. The language we both spoke well was music. The rest of the time, we spoke horrible English and very bad French, like the tourists that we were in each other’s lives.  Ça va.

Photo by Fred Moon on Unsplash

Lauren Shapiro is a 2017 recipient of the Bronx Council of the Arts BRIO award in the category of literary fiction. Her most recent publications include her essays “A Childhood Visit to Macy’s Santaland” published on the PBS webpage Next Avenue and “Avoiding...Medicine,” published by Notre Dame Magazine. Lauren is also a dance accompanist at the schools at Alvin Ailey and elsewhere, holding a B.A. in music from Queens College of CUNY, a B.Mus. from Manhattan School of Music and an M.A. in writing from Manhattanville College.