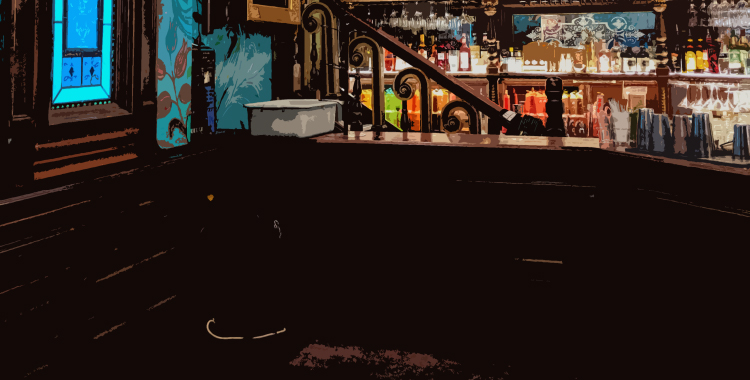 Mic, feeling every one of his fifty-four years, sat on a stool, hunched over the hundred-year-old mahogany bar scared with burn marks from the years when smoking was allowed indoors, and water rings from thousands of drinks that had been served in it over the decades. A pint of the-black-stuff in front of him and three empty shot glasses turned upside down, next to it. It was quiet except for the hum of the ceiling fan, and Mic craved peace and quiet.

The bartender, Sean, in his Irish Celtic team jersey, stood under the original hand carved McDermott’s Irish Bar sign that hung over the bar, drying a glass. The pub was empty except for the two men, most of the regulars wouldn’t wander in until after 5 o’clock.

Mic picked up the pint and took a long swallow, then set the half-empty glass back on the bar. The front door opened, allowing sunlight to briefly enter the dimly lit room. He didn’t bother to turn around to see who entered, but Sean nodded and smiled to the stranger as she sat on the stool next to Mic.

Before Sean could respond, Mic picked his glass, “It’s really not that kind of place.”

She turned to Mic, “What kind of place is it?” She leaned back and crossed her legs, causing her skirt to inch higher up her thigh.

Mic drained the glass. “It’s an Irish pub, been here for over a hundred years.” He tipped the pint glass at her. “We drink Guinness and whiskey.” He lifted a shot glass and wiggled it at her, then nodded to Sean, “Another for me, and one for the lady.”

Sean nodded, put down the towel he was using to dry a glass, and picked up a bottle of Jamison’s Irish Whiskey, and two clean shot glasses.

“I’m not much of a drinker.” Her high heeled foot slowly bounced up and down.

Sean placed a shot glass full of brownish-gold liquid in front of her and smiled, then sat the other in front of Mic, and went back to his towel and glass.

Mic picked up the tiny glass and raised it to her, “You never know, maybe you were Irish in another life. Sláinte.”

“Sláinte?” She sniffed the contents of the glass and took a sip wincing at the taste.

“Cheers in Irish.” Mic drank the shot in one gulp, she followed suit.

“Not for me, thanks.” She wiped her mouth with her drink napkin. “That went right to my head.”

Sean poured another shot and sat the glass in front of Mic, who picked it up and drank half of it then turned to the woman.

“I haven’t seen you in here before, you’re not a local.” It was a statement, not a question.

“No, actually I’m just in town doing some shopping and meeting my daughter for dinner. I just came in to rest my feet until it’s time to meet her.” Her high heeled foot bounced slowly up and down again.”

“You have a grown daughter? You don’t look old enough.” He looked approvingly at her.

“Yes, she’s twenty-two.” She glanced at her, obviously expensive watch. “Speaking of which, I need to go.”

“So soon? You just got here.” Mic stood up unsteadily.

“Afraid so.” She stood but misjudged the height of the stool a bumped into him, grabbing his arm to steady herself.

“I’m so sorry. I told you I wasn’t much of a drinker.” She stepped away from him and placed the strap of her purse over her shoulder.

“Maybe, you should have a cup of coffee first.”

“No, I’m fine. Thank you for the drink.” She turned and walked out of the door without looking back, sunlight briefly entering the pub again. Mic returned to his stool at the bar.

“She was nice looking.” Sean picked up another glass to dry.

“Probably married.” Mic finished off the rest of his whiskey. “Speaking of marriage, I should be getting home.” He stood up. “What do I owe you?” He reached in his back pocket for his wallet.

“Forty should cover it.” Sean set down the towel and walked to the cash register.

Mic patted his jacket pockets, trying to find his wallet. “My wallets gone, that bitch must have lifted it when she bumped into me.” The anger was apparent on his face. “Maybe, I can catch her.” He raced to the front door, flung it open, sunlight filled the room as he ran out.

Photo by Jared Burris on Unsplash

Alicia Crumpler is a Professor of Criminal Justice at the College of Sequoias in California. When not teaching, she can be found reading, playing the flute, or trying to make words stick to paper. She lives in Central California with her wife and two fury kids.