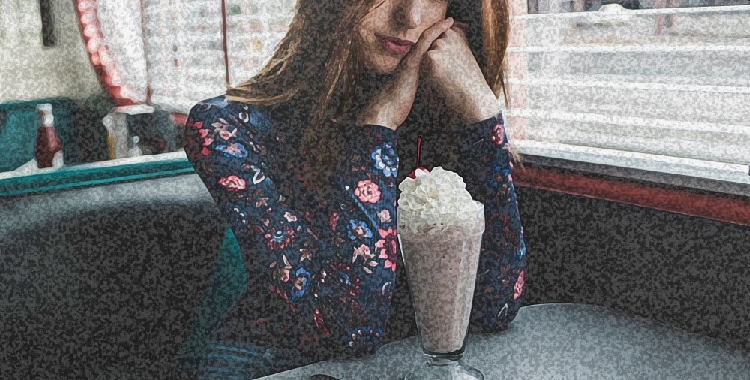 Coming up from the West Fourth Street subway, I texted that I was a block away from the Washington Square Diner. Don’t rush, I’m early. Samantha strolled up moments later, dressed in a bell shaped houndstooth skirt hemmed a couple of inches above the knee, a tight fitting pumpkin orange short sleeve blouse and black high top sneakers. Donning headphones, she was lipstick grins. We walked in, grabbed a table set for four by the window looking out on an iron-bound city park and started in right away on movies and scripts and horror versus suspense and brutal honesty in film. Our opinions and how we audience film and television are rivers apart, making for rich talk.

Her hair is now longer than when we met. There’s a beautiful softness to how it falls and frames her face. She wears a smooth base of Arabesque foundation, sometimes eye-liner behind her rectangular smoke gray glasses. Always lipstick and painted nails. There is no mistaking her for anyone else. It’s Samantha’s style. And there’s no mistaking Samantha was once a man.

We are both writers. Samantha is multi-dimensional in her process, when it comes to the overall artistic creation. Frame by frame, she envisions complete ideas. I think I’m more limited in my scope. Like in chess, I don’t seem to be able to see more than one or two moves ahead. I write memories, she writes and speculatively, cinematically chronicles.

I am not a fan of violent movies. Even when my brain knows it’s sound-editing and prosthetics, I turn away from amplified gore. Samantha lives for this stuff. I doubt I’ll make myself watch a Tarantino film again, no matter who’s in the cast. I would bet that Samantha will never miss one. Add sci-fi or supernatural horror on inexplicable landscapes and she’s in her element. My focus on movies has waned significantly: I blame it on my schedule and not having NetFlix. Practically a self fulfilling prophecy, Hollywood’s colossal-budget action films have infested movie houses, murdering the industry’s midsize releases. Ironically, superhero movies are now the rare genre I’ll pay an obscene ticket price to watch in a dark theater, where size and sound make a difference. I may have seen ten movies in twelve months. Samantha sees everything that interests her. It feeds her sensibilities as a viewer and a film maker. She’s fueling herself to breathe that life.

We’re 20 years apart in age. I recognize Samantha is traveling through a new adolescence at 39. Having come out as gay at 19, I too tripped deep into a second coming-of-age — as if once wasn’t more than enough. Whatever out-of-control frontiers you navigate, there is no way to get to where you want to be without going through it. At 13, it’s blind exploration. As an adult, it’s blinding reinvention.

I first met Samantha at the coffee shop where she works. I spend a good deal of time in cafès and restaurants; solitary writing in a crowd of white noise. Most of the people who work at this West Village cafè are artists. Other than arguably amusing greetings when face to face at the register, I didn’t have a friendship with Samantha. That changed on Halloween, 2017, when I walked up to the marble-top counter to order my large chai latte with skim milk. His costume seemed to be blatantly lazy. Red lips and round rouged cheeks, a cream colored blouse over outlined bra-straps above a pleated ballerina skirt and a hair band with black kitten ears. It didn’t seem to me as if he put a whole lot of effort into the costume. I blinked and started to laugh.

“What’s so funny?” he asked. “Nothing,” I said. I had embarrassed him. I wasn’t looking correctly.

My callousness still makes me cringe. Though wearing a Halloween outfit, this was a day of emancipation. Born to the public on October 31, 2017, “Samantha” was introduced as identity.

When I was five, I liked to wear costume baubles my mother saved in a jewelry box she stored in a closet next to her bed. In her forties by then, I only remember seeing Mom in legitimate pearls and gold. She didn’t object, even when I strolled onto the outside deck in her patent leather high heels. Around the time I turned ten, my sister caught me in her bedroom wearing one of her dresses. Startled but not surprised, she kept it to herself. And at a very young age, I told someone — I don’t remember who — that I believed God had changed his mind at the last minute and made me a boy. All of these authentic sides to me, though not a manifestation for whom I am attracted to, were private confirmations of my being gay. Whatever cathartic insecurities surfaced, I didn’t feel as if I were assigned the wrong body. I don’t fight the accusation that nurture in the name of “act like a boy” plays some part in why I don’t want to or enjoy dressing in drag.

I was born in 1959. Understanding or embracing (I hate that word) my feminine side, Freud would be pleased to know I love having a penis.

I don’t know if Samantha and other trans women had similar behavioral symptoms. I can cross reference roles played and come up with multiple outcomes and not see a map for identity.

Samantha has known for most of her life that she was born in the wrong body. She was raised as a He. He was not feminine. He was brought up in a working class middle-American family; at certain points, quite financially well off. He never got along with his father. He was deeply intrenched in his community’s church, one that I brashly accuse of being a cult. He married a woman, also part of the parish. They were divorced sometime before he moved to New York City. I have asked: in the here and now, Samantha is a lesbian.

In the weeks after her coming out, Samantha and I would often start talking about our artistic progress while she took my drink or food order. Inevitably, it would be cut short, since she needed to take care of a line of restless customers, and I should at least be pretending to work.

At her suggestion, we should be turncoats and meet one day at a nearby coffee house before she began her afternoon shift. So with honesty and listening, an unexpected friendship began.

I had always presumed transgender automatically translated to passing. As with every “they” we cluster into groups, “they” is actually made up of individual human beings. Who knew…? I’m not saying that Samantha wouldn’t prefer to pass — I’ve never asked her. But the freedom is being the woman she knows she is. It took her 38 years to re-dress. I don’t pretend to know what that took.

It was months before I naturally used the preposition, “her.” Samantha was patient. I had only known her as a man. Though I thought I had, I didn’t really understand. A true excuse is having defined myself as a gay man. Even if I was never to have sexual relations with a man again (Heaven forbid…), I identify as gay. Samantha is a woman. Period. Attraction is who you like, not who you are.

Knowing she is trans may not effect my opinion of her, but I’d like to get to a place where I don’t think about it at all. I’m anxious for her, when she travels through airports back to family and friends in Ohio. And I’m afraid that some group of assholes will terrorize her on a subway in Brooklyn or Manhattan. The cocoon of tolerant protection that is New York City isn’t always secure, even though we who live here sometimes deny there’s a threat.

Recently she posted two self portraits on Facebook, side by side. Left, when she was a man and right, who she is now. Same heart, same mind. Now living out loud, on a crossing to completely becoming herself. I don’t even remember what his name used to be. My friend: a woman named Samantha.

Photo by Garin Chadwick on Unsplash