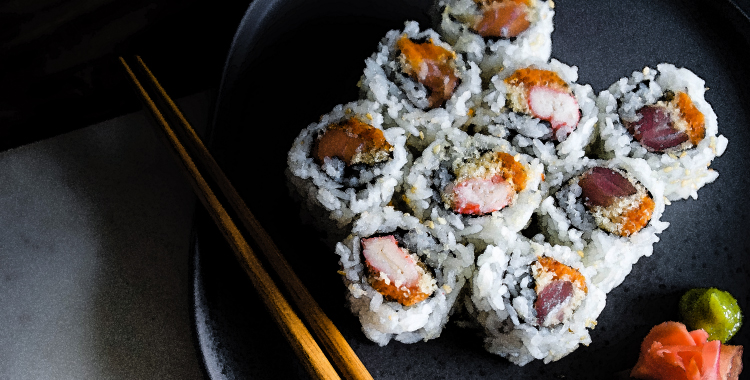 I knew, from the moment I woke up in Akihabara, in that spare white hotel room overlooking the five-story mall full of flashing red robots, that it had happened.

I told him and he smiled indulgently in that way that he does, said, does that mean you can’t eat sushi, because that would be a shame considering we came all the way here to eat.

No, you dope, I said. Look at all these healthy Japanese babies running around. Do you think their mothers gave up sushi for nine months?

Fair enough, he said. My mother said she lived on sour mangoes dipped in chili powder. And look at me! I turned out great!

In fact, I said, let’s go now. Fish for breakfast!

My hunger got us only as far as the first street vendor. Looking at my egg-carton of glistening takoyaki with a tiny octopus embedded in each, I remembered learning the homunculus theory: that we all pop into the womb a fully formed, miniature version of our eventual selves. Only the scale changes as we develop, are born, go through life. You learn about cell division and embryonic development and that makes it seem ridiculous — or at least that’s how they told us to think about it — but there is something to that, I thought. Something enters this world fully formed.

Baby demanded steamed snow crab, its legs a tantalizing tangle splayed wantonly across the plate, and wagyu beef, which, when grilled tableside on its own tiny hibachi, accordions in on itself, its fatty ribbons barely holding it together. Suddenly it seemed necessary, not at all indulgent, to ply those cows with beer and massages, just to keep them from falling apart. Baby shunned seaweed salad and cool, crunchy discs of cucumber; demanded cloudy, well-buttered ramen with an extra egg and a slick of pork fat on top, but the next morning complained bitterly over the garlicky broth.

I had to stop in Yoyogi Park to rub my burning chest as the other runners slid by us, ever polite, confoundingly unscented.

Don’t you want to buy a pregnancy test or something? he said.

I can’t even understand the instructions on my face cream, I said. It would just be confusing. And besides, I already know.

He grabbed me by the shoulders, to steady me or confront me I can’t be sure. I saw the crinkled eyes of the overworked engineer, the faint pockmarks of the prefect at Nehru Boys’ Day School, the set forehead of the man who insists we make the bed every morning, says it’s the only way to start the day.

You can’t actually know for another 22 days, he said.

He traced my gaze.

Seriously? he said, raising an incredulous hand to stop me from drifting toward the shellacked, too-real-to-be-real clay models of fluffy yuzu ice cream topped with candied kiwi and roasted peanuts, folded comfortingly in a waffle blanket. You don’t even like sweets. My mother still dissolves into tears —

I said I was sorry.

Yes, well, you could’ve eaten one, to prove it.

Just! Rasgulla! he nearly shrieked, forcing a rabbit like man in a blue headband to jump and swerve from his course, as if bitten by an invisible pursuant. Just rasgulla, she says! Do you know how long it takes to make a good rasgulla, especially with her arthritis? She made them specially, for you.

Sorry, I said, staring back at the ice cream as he steered me, patiently, abidingly, in that way he does, in the opposite direction. I’m sorry. I’m not myself.

So it would appear, he said.

You get a clear shot of Mount Fuji in all of its glory from the bullet train. The squat, snow-topped mountain looks so perfect it may as well have been painted. I paid it no mind as the other passengers crowded one side of the cabin to take pictures. I ate my lunch.

Baby wanted to savor the sweet, vinegary rice grain by grain, but was getting irritated that I could not pick up the pieces fast enough with the fiddly chopsticks. It wanted them cleanly, clinically, robotically, as if each rice had a different taste. Maybe it did and I never noticed that before, I thought. What a clever baby you are.

The milk in Kinosaki is famous, they say. I never liked milk, have always hated the creamy film it leaves on your tongue, in fact, but Baby wanted that Kinosaki milk to the exclusion of everything else. I drained glass after glass as the waitress, cheerfully at first, and then haltingly, refilled it.

We locked eyes and I patted my stomach softly, drawing a half-moon around the already burgeoning flesh. She nodded, took my glass away and returned with a smile as wide as Mount Fuji and a beer stein, filled to the brim with milk, the cream threatening to slosh over the edge. I brought my palms together, inclined my head, bowed thanks.

When I returned home I bounded to Dr. Mahomet with all the confidence of a newly anointed Head Girl at the start of the year. Which I never was — Gandhi Girls’ did not promote dreamers to prefect.

Baby and I waited for her to get to the point.

“You said you were in Japan, yes?” she said.  She puckered her delicate nose. “Did you eat raw fish there?”

I nodded, feeling Baby flutter with sudden interest. Calm down, I said.

“Antibiotics should set you right,” she said, handing me a prescription slip, tinged with her scent of jasmine and musk and something … garlic. A waft of garlic. Baby did a figure-eight in protest.

“Maybe a food baby,” she said, laughing at her own joke. “Sounds like you had a good time over there. But next time, go easy on the raw fish.”

She’s wrong about you, I assured Baby as I flagged a taxi for Mr. Lal’s Fish Curry Emporium, which, I told Baby, would take us at least an hour in this traffic.

The wife of the Kaurava king, it is said, wanted so badly to have a child that she visited a holy man in desperation. He told her she would be blessed with a hundred sons, who would bring delight and destruction to the world.

Gandhari waited two years as the mass grew in her stomach, only to give birth to a big black ball, not a baby at all. She tore her hair and raged at the gods, pulled all of the gold threads out of her saris, cried oceans of tears which she saved in copper pots.

Still the ball sat, heavy and black and impassive. She was about to call the servants to dispose of it when the holy man reappeared in a vision and bade her to stop, told her that she must instead take the ball and fill one hundred copper pots with ghee. Into each one, he said, she must put a piece of the ball. In two years, he said, the pots would produce her one hundred sons.

But I wanted a daughter, she said.

Fine, he said, one hundred and one pieces. Put your daughter in a pot full of tears.

I had decided, on the flight home, that Baby is a girl. Or rather, she told me. I sat chewing her fish curry, savoring the rice grains one by one, motioning to Mr. Lal for another sweet lassi, cool and thick like Kinosaki milk.

Now all there is to do, I thought, is to collect my own tears, and give her the time to grow from what is already there.

Anita Lakshmi Powell is a radio-television journalist based in Southern Africa. Her short stories have been twice longlisted for the Commonwealth Short Story Prize, and her first-ever entry to a fiction contest was published by Commonwealth Writers and was their most-read piece of 2018. She was born in Australia to immigrant parents and now lives in Johannesburg with her family, which stars her three-year-old daughter.