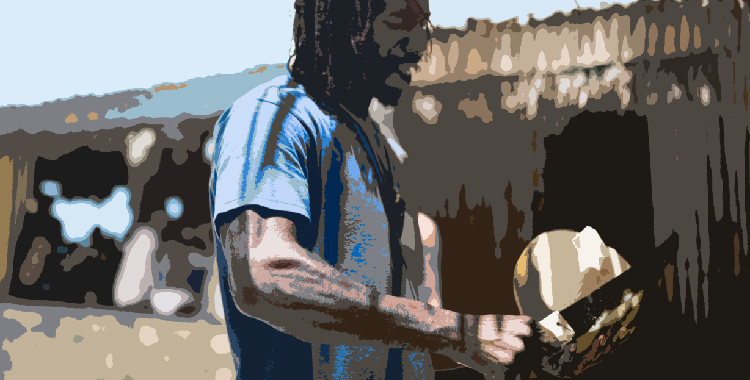 My mother and I stood in line for a coconut. My feet sank into the hot Caribbean sand as we waited with the other tourists. We were an eager flock of seagulls who spotted a beach-goer tossing bread crumbs into the horizon. The man was using a machete to decapitate the green coconuts, where inside the smooth hollow shell was pure coconut water. It was subtly sweet and lukewarm. And like every other beverage served on the resort, it came with a paper straw. The man handed each of us a coconut. My mother gave him a few hamburger-folded dollars for his service even though the coconut was free of charge. This luxury was one of the many amenities included in the all-inclusive aspect of the Hotel Riu Montego Bay.

The bay is in the north-east of the Island, which is confined by the turquoise water of the Caribbean Sea. This was my first time in Jamaica. It is the fourth largest Island in the Caribbean Sea, taking up 4,243 square miles. This is about less than half the size of New Jersey, which is 8,729 square miles. It is also one of the five Islands that makes up the Great Antilles. The remaining four Islands are Cuba, Hispaniola (which divides into Haiti and the Dominican Republic), Puerto Rico, and the Cayman Island. In relation to these Islands, Jamaica is south of Cuba and west of Hispaniola. One thing that distinguishes Jamaica from its neighboring countries is its cuisine. I guess it would also be appropriate to include signature cocktails too.

Two years ago, I had sustained the dietary lifestyle of a vegetarian. This is a person who abstains from consuming meats such as fish and poultry. I also wasn’t much a fan of dairy milk, but still drank it every now-and-then. However, I will admit, sunny-side eggs with a drizzle of honey and rosemary are delightful. But let me tell you— while in Jamaica, I tried oxtail, curry goat, octopus, and jerked chicken. It was a divine meat galore, and I had once been a vegetarian for six consecutive years. Across from the man handing out coconuts on the beach was the jerk chicken shack. It was small and made of authentic materials. The balmy breezes would come by and sweep the smoke into the air, along with little red sparks that made popping noises as they catapulted off the grill. Despite the popularity of jerked chicken, several natives claimed that their favorite cuisine is saltfish.

The national dish of Jamaica is the ackee and saltfish. Ackee is a type of fruit that belongs to the Sapindaceae plant family. Lychee is also a part of this same plant family. Ackee has a bright red exterior and it exposes a yellow flesh and three seeds that look like shiny black olives. This fruit is boiled and sautéed with onions, peppers, tomatoes, spices, and saltfish. Saltfish is also known as salt cod— the Atlantic cod.

My mother, two brothers, and I went on an excursion with a group and a tour guide to see the Dunn’s River Falls. The group consists of maybe a dozen other people. We all got on the big blue bus labeled “29” in a fat dark text. It took nearly an hour and a half to reach our destination to the waterfall in Ocho Rios, Jamaica. This is where we were to form a line and lock hands while climbing up the 180 foot tall waterfall. Mama “D” instructed us all to hold hands to ensure no one would slip or get injured on the way up the fall. I learned that the darker rocks are the slippery ones. You have to watch out for these ones.

Mama D was our tour guide, a native woman in a polka-dotted blouse that was tucked into her knee length pencil skirt. She taught us a few things besides what the National Dish of Jamaica is. On the ride there, she asked us if we have tried the Red Stripe beer and Jamaican Blue Mountain Coffee. Red Stripe is a pale gold lager beer brewed by the manufacturer Desnoes & Geddes. My younger brother, Mason, seemed to be a fan of the beer there. Luckily for him, he makes the cutoff for the legal drinking age which is eighteen years old. Not so luckily, I woke up in the middle of the night to use the bathroom to find vomit on the side of the toilet. Mason must have had too many beers from the resort bars. The bar drinks were also included in the all-inclusive benefit of the hotel.

Upon our arrival and check-in, two tour guides approached me, my mother, and brothers with iced refreshments. They handed us pink lemonade and mango juice in transparent cups. One of the ladies was named Rose-Marie and she told us about the Bob Marley with Rum cocktail. This was her favorite drink from the bar, and it was excluded from the list of cocktails. The Bob Marley with Rum is Rastafarian-inspired with layers of vibrant-colored slush. It consists of blue curacao, strawberry daiquiri, fresh mango, tart lime juice, and light rum. Mama D told use a little bit about rum cakes and the uses for white rum in home remedies.

White rum can be used to relief one of a cold. One of these home remedies require squeezing fresh lime into a shot of white rum, and then digesting it. The lime, along with other citrus fruits, is plentiful in vitamin C which supports a healthier immune system. In a few minutes, there should be a difference. A shot of white rum can also be mixed with Jamaican Blue Mountain Coffee and digested to relieve flu symptoms. Lastly, it can be used by applying directly to the skin to alleviate fever, aching joints, and cold symptoms. Mama D said that when children got colds, their mothers used to rub the white rum all over them and wrap them up in a blanket until the child got hot and sweated out the cold. These things were important to know in the integration to becoming a Jamerican. At least, Mama D thought we were all worthy of this title. “If you are American and in Jamaica, that qualified you as an official Jamericans.” she told us.

Photo by Kevin Sanon on Unsplash