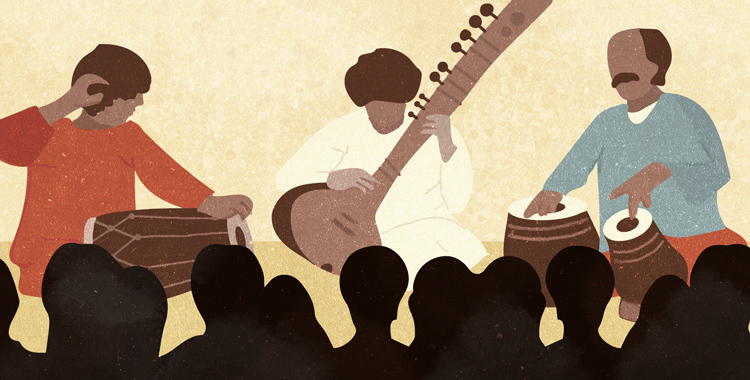 An early start in the  morning, despite it being a day of rest before six intensive days of teaching.  A short drive across town with friends took us to Kumara Park where a considerable crowd was gathered awaiting a morning performance. A colourful throng of individuals and families, each seeking a position that afforded a view of the temporary stage was milling around a large open ground sheltered on all sides by elegant trees. Eventually the crowd settled, seated on rocks, balanced atop a small gazebo type structure, crosslegged on the floor, perched on top of short walls, or in some cases sprawled on the ground. All had jostled politely for the best available vantage of the temporary stage.

A brief announcement and the musicians arrived, welcomed warmly by an audience several hundred strong. The brothers Pandit Rajan Mishra and Pandit Sajan Mishra, internationally feted for their interpretation of classical Hindustani song accepted the welcoming applause with great humility before settling as their fellow musicians tuned their instruments.

The performance began with a song in tribute to Saraswati at first a doleful meditative tune that eventually journeyed into complex rhythms led by the tabla. The crowd tapped and danced their fingers in a poor effort to replicate the beat, swaying gently to the tune. Many sat eyes closed appearing lost within the music whilst others stared in awe at the mastery of the maestros. Saraswati, a Hindu deity of knowledge and music – hopefully, I thought, this is a good omen for the week of teaching ahead.

Throughout the concert, disreputable monkeys asserted their ownership of the surrounding trees. Showing little appreciation of the music, they sought the attention of the audience like naughty children by shaking branches so that we were often showered in leaves and seeds. Unable to gain sufficient respect or distract the audience from their focus on the music they plotted further mischief. By the midway point of the concert they were clearly annoyed at having been upstaged by the musicians and took to the edges of the stage to steal the flowers so carefully arranged to enhance the aesthetic of the podium.

With some humour the musicians announced that the final song would tell a story of Hanuman the monkey king hero of the Ramayana. With this the villainous malcontents affronted by what they clearly regarded as an outrage, rattled the trees, as if in imitation of Hanuman’s army. I am convinced that if Sita had been dependent upon this troupe for rescue she may well have been sadly disappointed and Rama would have returned home broken hearted.

The concert over and the musicians affectionately acknowledged, we were in need of a late morning breakfast. A suitable venue was recommended and we left the park with appetites heightened by the early start and the energy of the music. Koshy’s Parade Café is a remnant of British occupation. Being in the cantonment area near Mahatma Gandhi Road it was apparently a favoured haunt of soldiers coming off parade. The owners have maintained its 1940 décor and the walls are hung with fading images of buildings from Bangalore’s colonial past. It was easy to image how the room may have looked when filled with British soldiers sitting beneath the ceiling fans seeking refuge from the heat. Today it feels like a statement of post 1947 pride, recalling past oppressions but retaining its status as a venue built upon hope and tradition. The appom served with an Indian stew followed by good South Indian coffee made for a fine end to a memorable morning, surpassed only by the excellent company of the good friends with whom it was spent.

Meet me at Koshy’s for Breakfast

There are many stories about famous people who may (or possibly may not) have dined at Koshy’s. They include Jawaharlal Nehru, and Nikita Kruschev as well as a host of artistic and literary figures. The breakfast at Koshy’s is legendary with a wide choice of both Indian and English dishes available, all served with panache and in an atmosphere,  which somehow manages to bridge old colonial and free India in a unique and lively setting.

In recent years, the leading historian Ramachandra Guha who is a regular visitor to the restaurant has used the venue to launch his books. In 2018, I met him there over a cup of coffee and along with most customers present we attempted to put the world to rights. Despite its reputation as a meeting place for the local intelligentsia there is a lightness about Koshy’s that seems almost to demand a simple lyrical response to its atmosphere.

Meet me at Koshy’s for breakfast,
The idlis there are so fine
And the coconut chutney and sambar taste good
and south Indian coffee or cardamom chai,
Whichever you choose are divine.
I’ll treat you to breakfast at Koshy’s
On Sunday when friends often meet
To discuss and debate all the news of the day,
Or the books that they’ve read or the films that they’ve seen
Before onset of the day’s savage heat
Once you’ve had breakfast at Koshy’s
An experience that should not be denied,
You will come back again for the fare and the banter
To share in the gossip, to hear all the scandal
That Koshy’s alone can provide