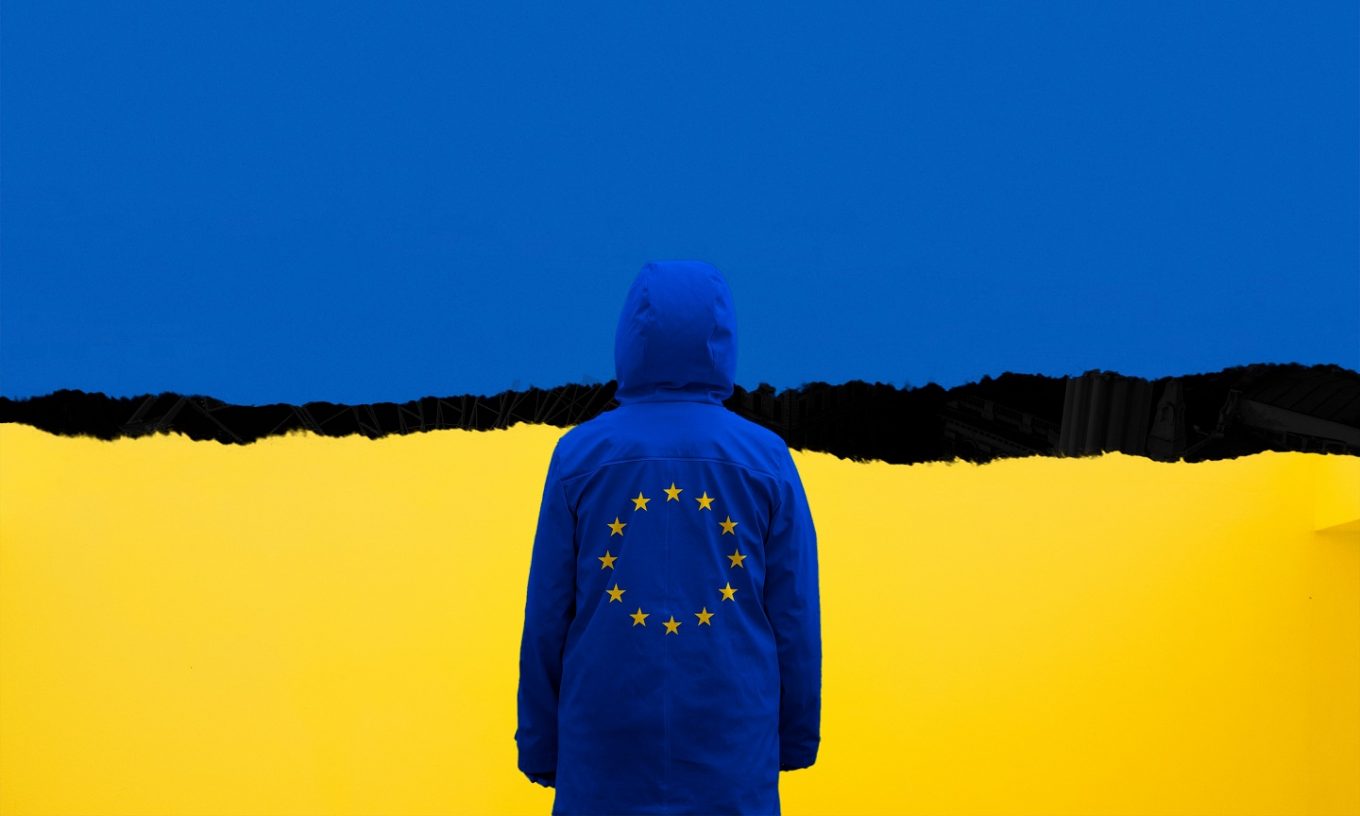 Is there a code of conduct, a special etiquette for offering support to someone hiding in a bomb shelter? What do you say to a Ukrainian mother and her children who spent three weeks in their basement with no electricity, no heat, and no water? To the woman who left Kyiv on foot with her cat?  She has no car, no money, and the farther she walks, the harder it gets, so she drops her possessions as she goes, mounds of clothes and food on the road. But her pet, she keeps.

There are articles about what to say and what not to say to someone who has suffered a great loss. I know not to say, “When one door shuts, another one opens,” or “God only gives us what we can handle,” or “You need to move on.” I know the best thing to say is a simple “I’m sorry” and nothing more. But that seems so inadequate given this situation.

Ira, a Ukrainian friend of mine, posts on her Facebook page that she’s scared.

I can’t cry anymore. I’m turning into a stone, no more emotions, no more. I don’t feel anything anymore, day is mixed with night. You can’t sleep without eating; you live from air alarm to air alarm. It is said that God gives a man as many tests as a man can stand. And how can you stand all this? What do you have to grab for? For what hook? I thank God for Toffi. He is calm. He comforts me.

What can I say to Ira?

Toffi is Ira’s companion rabbit. I also have a rabbit, which is how I met Ira. We both follow the Fred and Ginger Facebook page for animal lovers all over the world.  It’s owned by Steve, a middle-aged English man who lives with two rabbits, Fred and Ginger. He also has an ancient dog named Denzel and Lil Puss, a demented cat, according to him. He wears a baseball cap and tank top and posts videos of himself and the rabbits in his backyard while he drinks gin and tonics and makes amusing and irreverent comments about the world. He has a thick regional accent that makes his observations even funnier.

Steve swears a lot. He says “fuck,” “fuckin’ ‘ell,” and “bloody fuckin’ ‘ell,” and he calls assholes “arseholes” and “wankers.” But he always calls his followers “diamonds.” He laughs, raises his glass to us, and drinks his gin.

Occasionally, Facebook bans him for his language, and he has to spend time in “Facebook jail”—usually less than a week. But since Russia invaded Ukraine, Steve spends a lot of time in jail. The last time was for calling Putin a cunt and suggesting someone kill him. We agreed, especially his Ukrainian followers; nevertheless, the handcuffs came out and Steve was back in jail. This time, he didn’t surface for twenty-one days.

We tell him not to say anything about bumping anyone off, whether they deserve it or not. But when the subject of the war in Ukraine comes up, Steve can barely control himself.

Not so with Ira. She cuts loose on the Fred and Ginger page:

Fuck the Russkies and their liberation! They are orcs, racists, freaks! Fuck you all! Be cursed with your own children. The great Russian soul that is praised by the classics is nothing more than a pathetic, insignificant, and alcoholic soul. Childishness and dementia are the distinctive national traits of the Russians. When you think of Tolstoy​,​ think of Bucha!

Some of the Fred and Ginger followers try to reason with Ira. They say no good comes from anger and confrontation. They say you can’t blame all Russians. And I say it’s easy to be virtuous when you’re not sitting in a dark basement while your country is being bombed back to the stone age and your friends and family are being killed or disappear. A lot of Ukrainian women and girls disappear.

I reply to Ira.

I don’t blame you for being angry. If someone did to my country what the Russians are doing to yours, I’d feel the same way. I’m so sorry for what’s going on in Ukraine.

Ira thanks me. No one else writes anything.

After that, I friend Ira on both her Facebook pages: one for posts and photographs of the war, the other reserved strictly for news and pictures of everyone’s rabbits. I use a translator online and write in Ukrainian, even though some of the posts are in Russian; a lot of Ukrainians speak Russian. Ira thanks me for using her native language.

Dyakuyu tobi means “thank you.” The Ukrainians say it again and again.

I’m not used to being thanked by anyone outside the U.S., so when it happens, it still surprises me. It’s a holdover from growing up overseas. In 1958, the American corporation my dad worked for transferred my family to the Belgian Congo, just in time for the War for Independence. I was seven, and it was the first of many assignments.

In the 1950s and 60s, Americans were not liked overseas, compliments of our government’s unpopular foreign policy. Also, during this time, the U.S. economy flourished, so Americans could afford to fly overseas, where many had been stationed during the war. But they were new to traveling abroad, and adapting to social customs and other languages were things they’d never had to do.

The Europeans had nothing but contempt for American tourists, and so did my family. They made life hell for Americans who lived overseas. The Europeans referred to them as “fat, dumb, and happy.” They said we were loud, pushy and used the U.S. as a standard for everything. We were Ugly Americans. I didn’t agree, but I could understand why the Europeans felt that way.

I write back to Ira. Моє задоволення. It’s the closest I can get to “You’re welcome.”

I scroll through Ira’s Facebook page devoted to the war and read post after post of messages asking if anyone has seen a family member, a friend, a loved one, a pet. They post pictures of mothers holding children; husbands and wives with their arms around each other; old men and women with their cats, dogs, or rabbits; young men leaning against cars. All of them are smiling. I wonder if anyone would recognize them now, after all they’ve lived through, if they’ve lived through it. Sometimes, someone answers, but not very often.

I am so sorry.

Is an expression of endearment acceptable in a situation like this? I take a chance and write Ira.

Dear daughter. May I call you that? I have no children, but during this time, I feel we’re all mothers, daughters, and sisters.

I am so sorry for what you and your country are going through.

But, dear daughter, know this: I am so proud of you for your courage, resilience, and fierce love. You represent all that humanity should be.

I lived through a war too, but it was a long time ago and I was a child, and it was nothing like what you’re going through.

I, and the world, love you more than you’ll ever know. Imagine the mothers of the world holding you so you can sleep.

Your job now is to live.

Do words of encouragement and comfort, despite the odds, help? Apparently, for the Ukrainians, they do.

Thank you so much for your support. Every word you say, your prayer, makes us even stronger. Ukraine will definitely win.

Photo by Daniele Franchi on Unsplash

Rebecca Jung is a writer and poet who currently lives in Pittsburgh, Pennsylvania. Prior to that, she and her expat family moved eight times in ten years, most of it outside the United States. She returned to the USA to attend college. Her work has been published in literary magazines, including: Sky Island Journal, Memoir, The Impetus, Pennsylvania Review, Evening Street Review, Postcards Poetry and Prose, Not Very Quiet, The Write Launch, Prometheus Dreaming, and Purple Clover.

She earned her B.A. in English writing from the University of Pittsburgh, and a B.A. in art history from Kent State University. She is completing a memoir titled “Home Leave.”