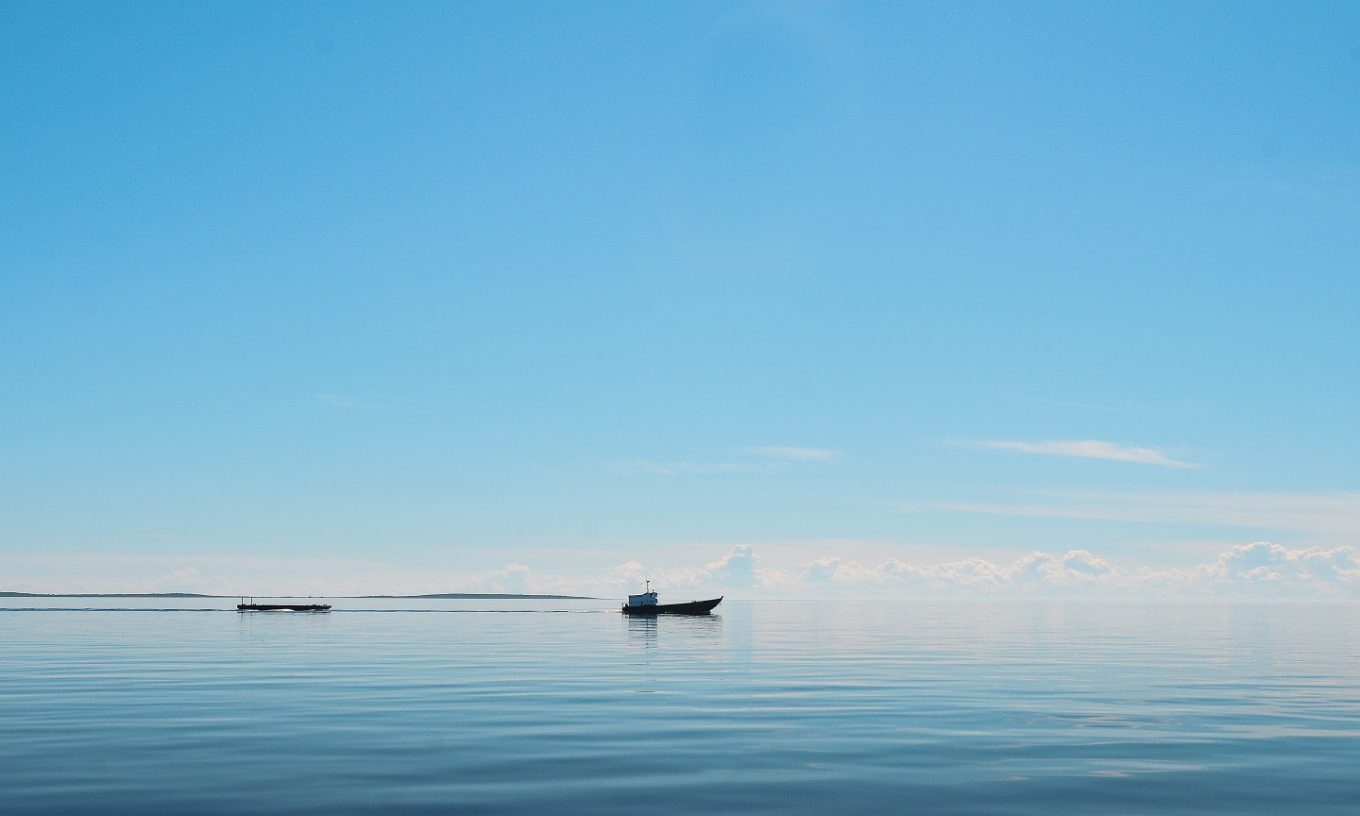 The boat was small. Prussian blue. Four men—all grown, whole-minded, individual. Each one squat down upon the thwarts. The sky was clear. The water thickly blue, still, endless. The boat itself belonged to Humbert. It was his venture.

There was only one oar—the other lost. They took turns, their necks and forearms glistening, the breeze minor, infrequent. None had squared their bearings and there wasn’t any course.

Late in the morning, John clutched at his head and proclaimed they would die; of course, their endeavor was final. Humbert, feeling the onus, argued against this and Willem agreed. Gunnar remained silent.

What can we do? John asked.

There’s no flare? Nothing? Gunnar asked.

No, Humbert said. We should be trying south.

There should be a flare on a boat, Gunnar said.

John leaned forward. Willem slapped him on the back. At the bow was a gritted jug of water, half full, secured now by nylon. Strips of dried fish were wrapped in a sack on the deck.

Humbert looked to the sun.

Toward where? Willem said. The islands?

By the least, man.

Gunnar turned to Humbert. He seemed to nearly speak but was quiet instead. It was becoming scorching and the men adjusted to cover themselves from the sun. They stripped and donned their shirts to resemble bonnets or capes. Humbert wore an old straw hat. The skiff swayed. They hunched in sweat to brood and did not paddle.

All they could see was the long lay of ocean blue; a spotless, looming sky; the sun, and the gliding form of seabirds: shearwaters and petrels and other gull-type aviators, tiny white citizens of the bleak and luminous desolation. Beautiful, Humbert thought. If it were not for doom, it would be beautiful.

Humbert looked at the men. Willem was presently turned, searching the water vaguely. John lay astern with his legs crooked beneath the thwart. Gunnar fondled the oar, his broad face stoic and red-blotched.

It’s simple, how it is, Humbert muttered. We’ve all got to establish some resilience.

The others were quiet. Humbert lay back awhile and fell asleep. He woke to dreadful thirst and to Willem plunging the oar mechanically. John sat gnawing a strip of browned fish.

Put it down, Humbert said.

Here’s a plan because of it.

Willem turned to look at John. Quickly, he swung the oar around, striking John at the hand. There was a sickly crack. The fish fell to the boards and the boat rocked.

Gunnar reached over and grabbed the oar. John cradled his arm, clutching the smacked and quivering width. Willem shook his head.

Willem laughed and sat down. He’s only graceless. Boneless. A botch of skin.

It doesn’t help, Humbert said. I hope you see that.

The water’s surface roiled with the rising wind. The men were silent again. John laid back and was still, looking into the sky.

At nightfall, they slept. Tried to sleep. The air cooled a few degrees while the water—shimmering, shifting—lapped the hull. Humbert leaned back into the frame, dreaming. He saw the shape of a woman—his wife, he thought—a hint of her skin. He saw too the earth submerged in a blue fold of heedless titanic waves.

At sunrise, Humbert distributed small portions of fish. A pinch of water. The landscape was the same. There, everywhere, was the clean rim of blue glass.

Humbert paddled a while. The sun grew stronger all the time. Behind him, the men spoke. He handed the oar to Gunnar and sat listening. His body shivered. His chin dripped. John was bent over the gunwale, his purpled wrist drifting above the water.

I meant to be in Rome by now.

My aunt died there. She lived thirty years engaged to a man. A florist.

The men shrunk beneath the sun’s crushing fever. Their skin blistered. Their lips caked with white film. Their minds began to slip. Thoughts wandered into strange and vacant corridors. Hung there. Time, too, lost its rhythm.

John barely moved for what seemed two days. Willem finally kicked him. Humbert croaked his name. John spoke then, but so softly that none could understand. That night Humbert watched the man’s descent into hysteria. John wailed deep anguish beneath the stars. He writhed, lamented, then lay still. Willem grabbed at him but Gunnar interfered. The boat rocked again.

Gradually, the men faded, each of them, to sleep.

At sunrise John was gone.

Humbert stared into the vacancy. He looked foolishly at the water. Only Gunnar asked aloud where John had gone. Willem did not answer. His gaze was loose and distant.

Dreams laced into wakefulness. Dull pain rapped at and prodded their organs. It was dark. The wind was smooth.

Humbert could not see the moon. He had his hat flattened to his chest.

Willem flicked hard droplets. He plucked them from overboard, cackling.

Two more days. They could not see land. No vessels broke the distant horizon.

The fish was nearly gone; the water used up. Humbert dreamed or was delusional all the time. He hardly moved. The lull of the boat irked him and his mind spun. Toward evening, Willem cried out pitifully. Gunnar sat low on the boards with his back to the thwart.

Think about something else, Humbert said.

What can you remember?

Only the worst things.

Humbert dreamt he was inside a theater. The screen was black. The lights were off. He went out into the lobby where everyone was standing. They were together, talking, and noted him but did not speak to him. His wife was there. He could see her, her eyes like candlelight, across the hall.

When he woke the boat was rocking. Thin clouds drifted overhead. Willem was standing over Gunnar, bearing down. The men flailed; Willem rained down spastic blows. Gunnar pulled at Willem’s shoulder, neck, and they spun—the boat heaved. Gunnar reached for the oar, trying to wield it, but Willem took hold. Humbert, dazed, kicked at them once, coughing — then only watched. The men grunted, spat, their withered muscles taut and wobbling. Gunnar rose and wrenched the oar free, raising it high into the air. He brought the flat end down onto Willem’s arms, his head. The blows resounded. Wood against bone. Gunnar wavered. Willem yelled and rolled. Then the oar came down hard onto his back, again his head. Gunnar crouched lower and struck with abandon until Willem’s body was still. Arms out. Skull bared and broken in.

Neither touched the body. The clouds had pushed off. Blood and a glaucous strain drained onto the deck and dried in the sun. Water lapped the hull. Gunnar moved and huddled himself into the bow. His face was pale. His one eye drooped. Bloodied. The oar, stained dark, lay inert, discarded where it had fallen.

They shared in silence what was left to eat. Gunnar, beaten with temptation, took the ocean into his mouth. Seabirds came for Willem. They perched and whirred above like shadows. Humbert couldn’t threaten them. He was enveloped by brightness and heat and void. Jerking his head at times, he saw the unfinished volume of things. The world fell into a faraway space and his insides slid, coiled, panged.

Dawn or dusk, Humbert didn’t know. Deep color stretched up the sky. He pulled himself straight. It was quiet everywhere. He took off his hat and felt the stinging at his crown.

Do you remember? Humbert said.

Gunnar did not answer.

The color paled. Shifted. Air rolled over him. His body pulsed, acquiescing. He would slide away, here, with the woman and the sea and the sun-baked blood and the slow shimmer of everlasting eyes. Now — he would retain them. Go, with fever, into the break; a silent mote drifting down the cool blue dark.

Humbert leaned over and hung one arm into the sea, looking out.

Photo by Anatoly Anikin on Unsplash

Liam Lalor is a Canadian writer of fiction and poetry. He has previously had work published in Button Eye Review, CONKER, and Blakelight Magazine. Liam is currently working on his first collection of short fiction, having recently published a collection of poetry this past Spring.