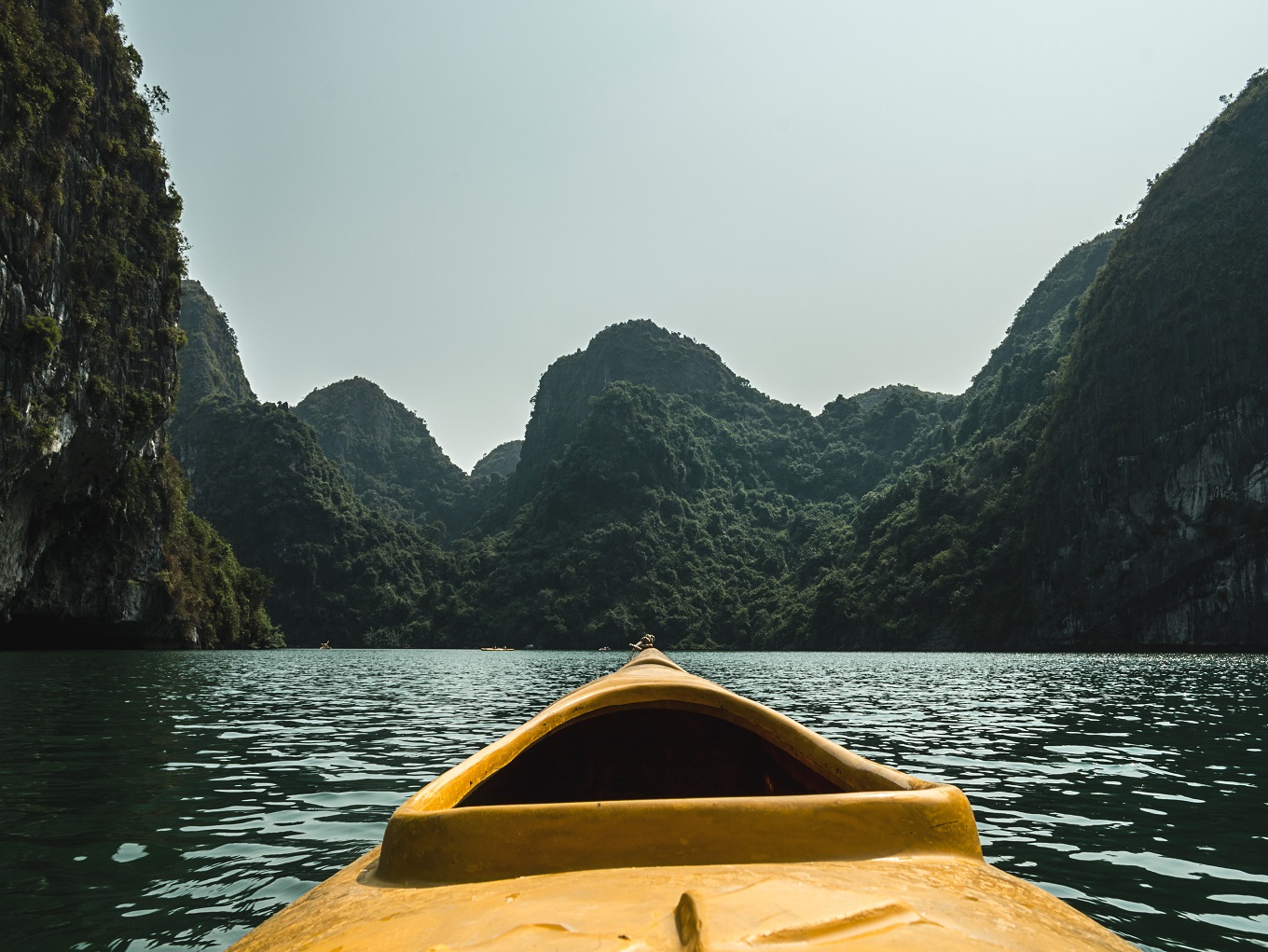 Last Thursday, I came as close as I ever have to buying a canoe. It had been a long and less than productive day, and I was casting a wide net for anything fun to turn it around. I left campus by bike and crossed past the back door of the maintenance building to bee-line for the intersection away and up the hill. At the corner, I stopped. Across the street, there was a yellow canoe for sale.

It was poised on a gently sloping grassy bank, not three feet from the street. It was a really fine canoe. The first thing I noticed was its shape. It was long and slender – or more so than you’d think at least. It was sleek and shone bright despite the direct sunlight. The paint was in good condition too, no water residue to be seen anywhere. In fact, it was impressive and looked handsome on the little hill that tipped its bow towards the street. Taped to the bow was a standard sign – store bought. “FOR SALE” it read, and offered a phone number beneath. My first thought was to take a picture of the number, but I chose instead to take a closer look.

Canoes have always appealed to me. Having been raised on the edge of a lake, I have spent an adequate amount of time in a canoe to know its pleasures and its basic mechanics; however, I never owned one myself. I’ve a friend who owned a metal canoe that he used to keep bike-locked to the shore of the lake. Many of us knew the password, and anyone who did was free to take out the canoe at their leisure so long as it was returned in good health. At some point, the password became common knowledge, and it was taken one summer and never returned. My friend, being the owner of many such things, was not put out, but understood that this canoe had taken its own leave as things are apt to do. He had the same protocol regarding his tandem bicycle, which was practically always on loan to someone and almost never accounted for. Every so often, he would take to the town to retrieve it from whatever lineage of people had borrowed it before taking the liberty of choosing the next rider themselves. He would walk around till he found it, explain the situation, and bring it home to be serviced before casting it out again to the goodwill of prospective riders. The canoe will probably return in a similar fashion. The secret to Joel’s wisdom is trust. If Joel had played warden and kept a watchful authority over his things, both would have been properly stolen and irretrievable. But by lending would-be thieves a great deal of trust, and the faith that they would not stoop to harm him, people feel obligated to return Joel’s good faith.

Now, I let my bike down on the verge and began a closer inspection. The seats were both still there – a rare commodity – and they looked like nice ones too. They were made of some sculpted plastic and looked like they’d accommodate a person nicely. It really was slender, no more than three feet across at its widest. The gunwales were made of a polished wood that had none of the telltale signs of affectation. Just sturdy wood that looked like hands had worn it smooth over some time. This was curious, too, because the rest of the boat looked practically unused. Well loved? I had made my way down to the stern when I looked over to see the owner taking something out the trunk of his car. I hailed him directly.

“Quite the boat you have here!”

He was around middle aged, or maybe the “years had been kind” type who was actually around sixty-five but didn’t show it. He had on jeans and a long-sleeve, for the weather, and was carrying boxes of something back to the house.

“How much you asking for?”

“Three hundred,” he said, without the slightest air of guilt. I took that to mean it was a fair figure, though I don’t actually know anything about boats. He walked over, and we began talking canoe straight away. He told me it was a racing canoe, which explained the slenderness of it. And that he and his wife had raced it together a few times. Canoe racing? I’d never heard of such a sport. He said it was long for a canoe too, all of fourteen feet, and that it was in good health. I believed all that and played interested, despite having been deflated by the exacting price point.

“I really like it, and I’ve been thinking about canoes a lot this summer, actually.”

“They’re a lot of fun, so long as you have the right kind of car.”

He was the kind of person you liked to talk to right away. As we talked, I could tell he had seen through my false interests, and was now humoring me more than anything else. I took no offense, and instead let the conversation drift. I had nowhere to be, and I enjoyed this respite from the toils that had plagued my day up until this.

I had passed the house many times before and remembered that there had been a miscellany of sporting goods on this lawn over the years. I distinctly remembered there having been a foam gymnastic wedge one time, the uses for which I was now completely bewildered by.

He said that the canoe was actually a bargain and that he could probably get more money off of Craigslist, but then he’d have to “meddle with that ilk.”

As we talked, he made me aware of a small pile of goods off to my right, which he said were free. I walked over and looked in. To my surprise, and stifled excitement, there appeared to be four six-packs of beer inside, a whole twenty-four all told. I looked back and raised some eyebrow.

“Yeah, that’s all free; the beer’s homebrew, actually. I made plenty of it over quarantine and have had my fill.”

Being a fan of the stuff, I was immediately quite excited. I’d heard of this “homebrew” thing before, but like car maintenance and haircuts, I’d always thought it best left to the professionals. He said that it was fairly good, considering its origins and that I could have as much as I liked. So, as not to seem greedy, I took one case and left the rest. I thanked him for telling me about his canoe and left to bike home.

At home, I told my housemate that we’d be buying the canoe and splitting it fifty-fifty. He played along for a moment before telling me we were already planning on buying other things like pool tables and a canoe should wait for spring. That’ll be fine.

Maybe it’s the pace? Canoes allow such a lush and gainly pace for looking. It could also be just their attractive looks. Either way, I returned that night, having strayed from the fastest route home to give the canoe another look over. It was there still, as bright as ever beneath street lamps. Not those atrocious bright white-too-white-to-breathe street lamps, but those warm ones. Naphtha. Honey. Ochre. Soft like gauze, soft like the afternoon’s longest light before the first intimations of color. It lay against the dew-laden grass and seemed alive. Like a mammal. Like a fish. Now in the night, my eyes were not drawn to its athletic shape but to its color, made brighter by the subdued blues and purples and dark greens of night. When before this canoe had been open water, a lithe arm rushing it forwards along the beach maybe, or sand and bright sun; now it was a pond. Green, bracken-lined water that stirred and pushed aside silken seaweed mats. Warm water. So warm you cannot feel it as you let your fingers trace through the currents left behind the canoe as it slides silently through the murk. What before had been a rush was now languid, silent, and overwhelming.

Photo by Jonathan Kalifat on Unsplash