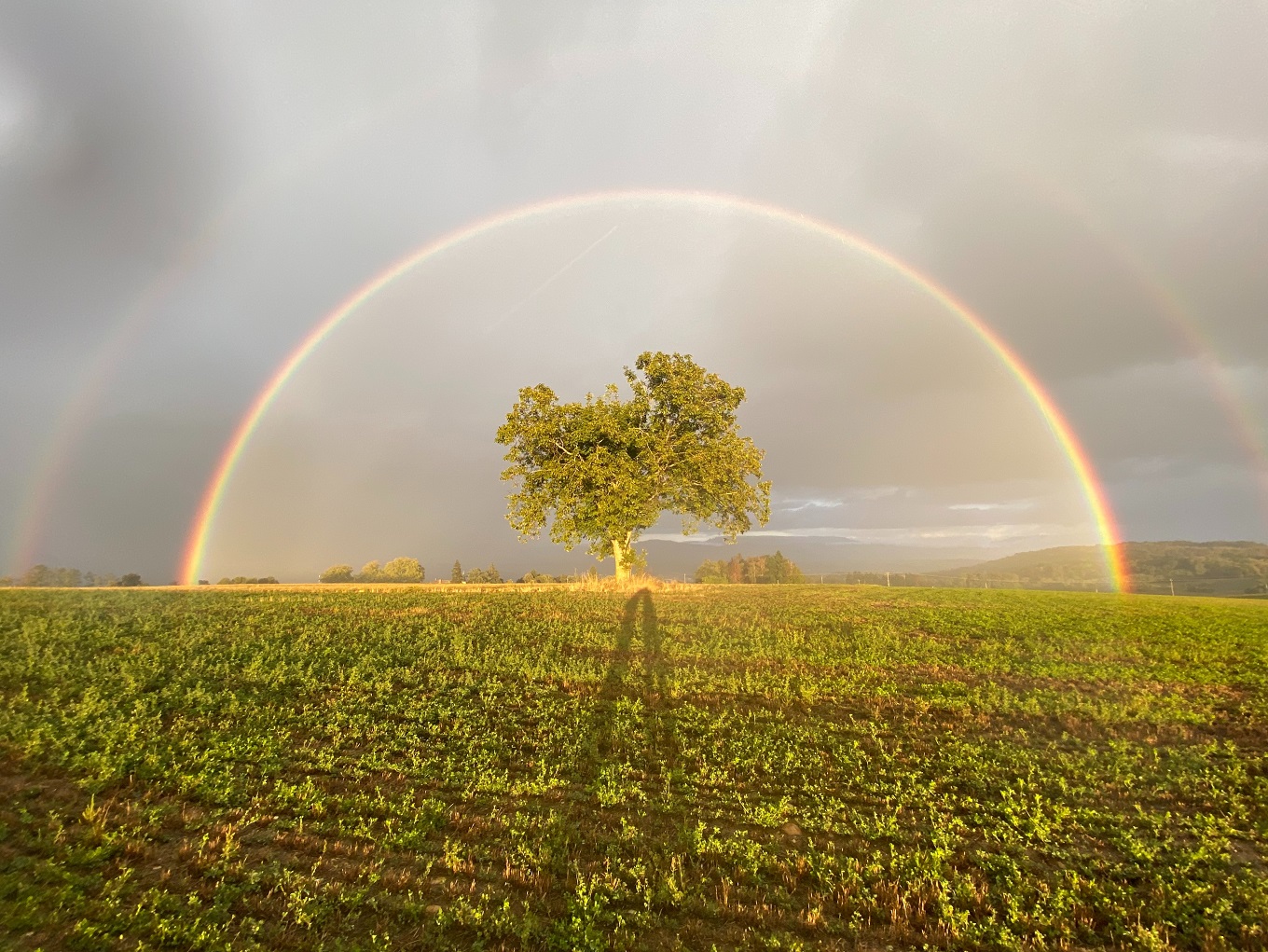 I drove under a rainbow on my way home from clerking at the library one summer evening.

The clouds I would drive into were brightly washed by sunlight on top and dark with the held heaviness of a June rain underneath. Foreboding as the road might have appeared, the storm was only a small cluster of rain clouds trailing behind a thunderstorm that had swept the library rotunda earlier that afternoon.

I was only really thinking about getting home to read when the first tiny drops of rain splashed over my pollen dusted windshield. As it started to rain, the road came around to an opening, and I stretched my neck over the steering wheel to look up and observe the coming clouds from a clear vantage, maybe catch a flash of lightning in the distance.

As I took in the landscape, I noticed a horizon-to-horizon arc of rainbow light right in front of me.

I was in thrall.

My car coasted dimly through green and yellow fields so familiar in my daily drives that they had become like calendar pages which revealed the time of year in hues of passing seasons. With my foot still hovering over the accelerator, the refracting arc of misty sky pulled back every calendar page in an instant.

Thinking I had been there before, I noticed in the field to my right a place where stripes of color in the rainbow ended definitively in the moist earth, just a few hundred meters from where I drove. I could see it, in front of a hedge of trees that lay dark, red and orange pillars of light buried into the foundation of the earth, plain as any eye could see—the end of a rainbow.

As I drove closer to the rainbow, it’s brightening colors grew larger and thicker and so much so that they domed over the whole of the sky above me, soon surrounding everything I could see in an ultimate brilliance. The light poured over me in such an extraordinary continuum of movement that I could sense it emanating from that which is unknown and illimitable in all things in all time.

In a flash, the rainbow’s myriad bands swooped past me with a sudden and lasting pause, held in like a breath.

And I. A bit of balled up energy adrift in some distant corner of the cosmos, who had just found the end of a rainbow.

Photo by Typhaine Braz on Unsplash

Dan Dorman holds an MFA from the Northeast Ohio MFA program. His work can be found in jubilat, Word for/Word, and Nōd Magazine, among others. Dan teaches writing and jockeys library books.