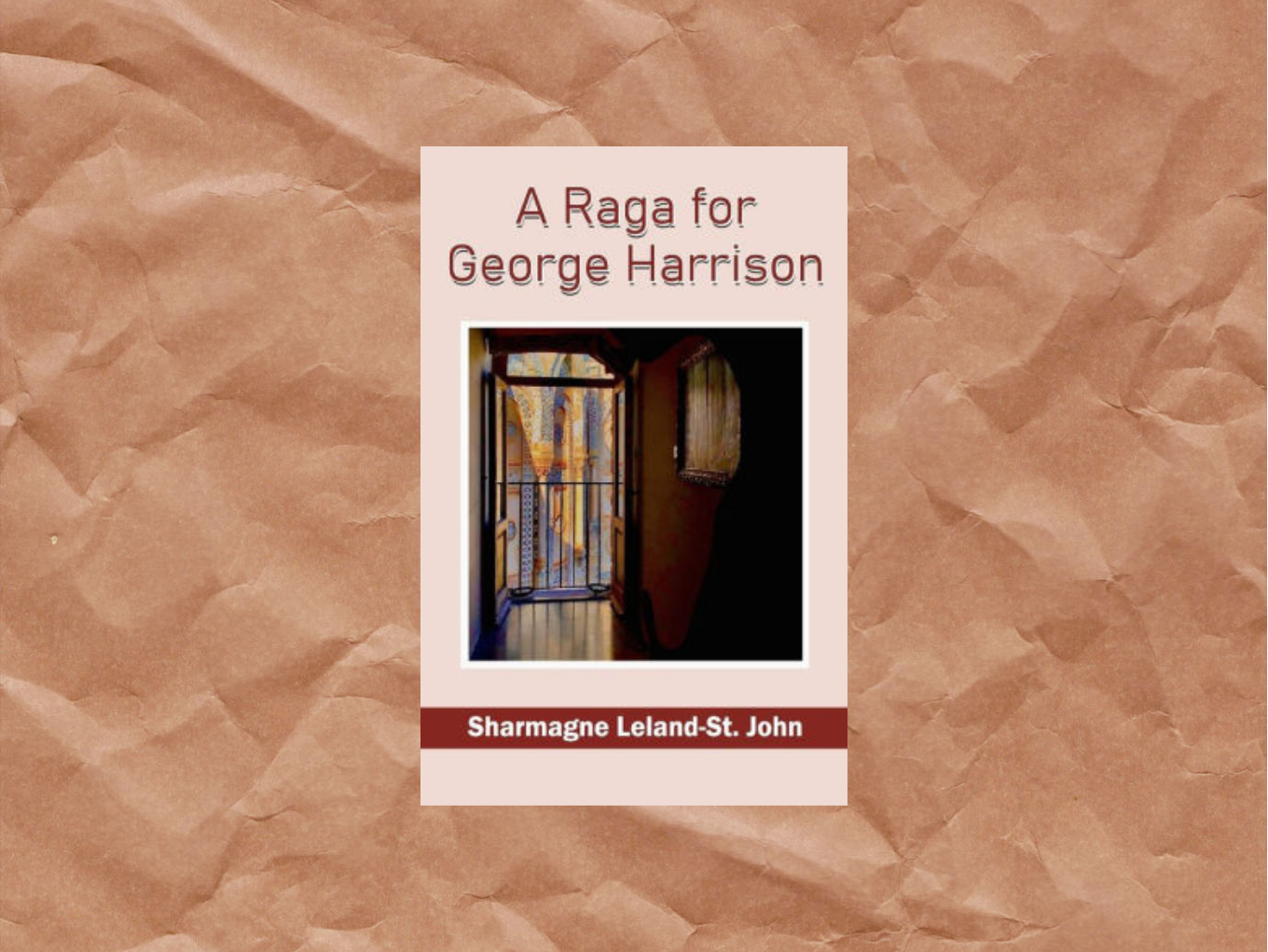 In A Raga for George Harrison, Leland-St. John writes in an endearing, nearly folksy, tone. Some of her poems are laments for departed friends, some are tributes to members of her artistic community, some share deeply personal losses. Her poems invariably transport us to places far and wide and evidence her varied experiences.

The volume takes its title from Leland-St. John’s connection with The Beatles, and Harrison in particular. The poem “A Raga for George,” which cites his dates (1943-2001), brings the era of the 1960s to the forefront. As an encomium and a memorial, the poem stretches toward the Northern sky and through its words grasps after glaciers and memories of childhood, and regales Harrison’s music as if it lilts across high desert plains:

Sitar strings sing
and reverberate
in this desert night,
his music still flowing.

Using unimposing words, Leland-St. John places the Beatles’ era in a wide timeframe that hints at eternity.  “It is the sounds one remembers / long after the visuals are gone,” she writes. “Love In” and “Hey, It Was the Sixties!” and even “Ariel” a tribute to Sylvia Plath, are additional poems that dig deep into the soil of the sixties, particularly in Great Britain and the U.S.

Her “Eulogie for Hector Pieterson” (1964-1976) begins, “He will not speak in syllables now / He will not utter a sound / in English, Xhosa, or Afrikaans//But he will speak volumes///this child / who took a bloody stand, who took a bullet, from a white man’s hand.” (p.26) This poem is a clear example of the poet’s empathic heart that is demonstrated over and over throughout the collection.

Most writers confront a barrier when trying to convey the sense of pain or loss in ordinary terms; in “Wild Dark Love Song,” overcoming this obstacle, Leland-St. John uses unrestrained, lyrical description to pay tribute to her deceased husband, Richard Sylbert.

He’s gone to live in jagged mountains,
Where salmon jump and sing,
In tarns
High above
The cloud lines
Beyond the silver moon.

The poem’s iambs invite us into its lilting rhythm, a kind of physical slow-rocking—the reader can enter this rocking rhythm and participate in the poet’s effort to assuage the pain of her loss.

There’s humor here, too; contained in the collection is “I Said Coffee” (p.45), one of the author’s most famous poems. She also contemplates the Mona Lisa smile of one coy female as it is transformed into a Cheshire grin (see p.76). We also encounter her light humor in “Haiku Rules” (p.77) that would have the word “cicada” banned from all haiku henceforth.

Because the Beatles played a prominent role in an important phase of Sharmagne Leland-St. John’s life, an era that also touched my own early life, I read her collection of poems as a memorial of that era. I enjoy her verses for her sympathetic but never morbid reflections of loss, and for her gentle treatment of personalities she has known.

In the poignant “Rose” (Pgs. 73-75), the author addresses her mother and asks wistfully,

Did you ever dream of us?
2 little girls
Living like Madeline
Under the scrutiny
Of a strait-backed mother superior [the poet uses strait-backed, not straight-backed]
And a passel of cruel, poker-faced nuns?
Did you dream of us
Being locked away in chilly closets,
For weeping at night,
Because we missed you dearly?

Here we see clearly the pain of her early childhood, a childhood she shared with her sister, both having been quasi-abandoned by their parents. Yet she would have us know, by her controlled tone, that she is now fully able to address these losses and lets us share in them through her beautiful writing. We can only say “thank you” for the “perfumed flowers” and the “scent of the night” she hands us.

Carole Mertz loves writing in all forms. Her poetry, essays, and reviews appear in literary journals in the U.S., Britain, Canada, India, Scotland, and So. Africa. She is book review editor at Dreamers Creative Writing (Canada) and editorial assistant at Kallisto Gaia Press (U.S.). Mertz’s musical career was forming just when the Beatles began their wildly popular U.S. performances. She is the author of Color and Line (Kelsay Books, 2021) in which she shares her ekphrastic and other poetry with readers; Mertz resides with her husband in the Midwest U.S.